Nobody can hide their secret desires behind a mask for long ...

Noelle Farinas is a very driven young woman. When she is passed up for a much-deserved promotion at Foster and Howe, she immediately begins looking for ways to prove to Dante Frost that he made a mistake when he overlooked her. Her research leads her to Switch, where she learns of Dante's history at the club. She hatches a plan to lure Dante to her at the annual masquerade party, but she never counts on enjoying her session with him.

And she certainly doesn't expect Dante Frost to ask for a more permanent arrangement between the two of them ... 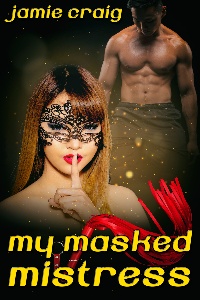 Dante continued softly, "I can't stop wondering what else you can do."

Noelle focused on her food, taking out her sandwich and unwrapping it. "You've been out of the scene for a long time," she said without looking up. God, she hoped it made her look nonchalant, because she felt anything but. "Maybe you should take a night off and go to Switch to refresh your memory."

She glanced at him through her lashes. That explained how he'd found out about her presence there, at least.

"Roxanne because she was free despite the short notice. Then Rosalind took over, for old time's sake. It was fun, but I won't risk going there again."

"That's a shame. Not that I have a wealth of experience, but it didn't look like you'd forgotten a thing."

"I haven't." Dante methodically unwrapped his sandwich -- turkey, by the looks of it. He lifted the bread and inspected it before nodding with satisfaction. "Would you be willing to work out an arrangement with me?"

Noelle was proud of herself. She didn't even choke on the bite of roast beef in her mouth.

"I'm not looking for a sub," she said carefully.

Dante studied her for a moment, then inclined his head. "I trust, then, that what happened on Halloween night will stay between the two of us?"

"Of course." But then curiosity got the better of her, and she blurted out her question without thinking. "If you want a Mistress, why not make an arrangement with Rosalind or somebody else from Switch?"

"They don't do house calls. Which makes perfect sense. It's safer for them if they only agree to meet clients at the club. And I don't feel comfortable going to the club anymore."

"Because of your position here."

"Right. Not that the people at Switch aren't discreet. They are. But there is still risk involved."

"And there's not risk asking one of your employees?" The more she thought about it, the more she wondered if maybe they couldn't work something out after all. She might not get her promotion, but she could have weekly vindication of her anger. And get a great orgasm, to boot. "If I were you, I'd be more worried about what might happen if I got pissed off."

"You're right. But if you're not interested, it's a moot point, isn't it?"

"I didn't say I wasn't interested. I just said, I hadn't been looking for a sub. Now, if a sub found me ..." She took a long drink from her iced tea, refusing to look away from his direct gaze. "What kind of arrangement did you have in mind?"

"One meeting per week, at my home. I have thought about the risk of doing something like this with one of my employees. But I don't think I'm mistaken in trusting you."

Noelle wondered if he'd say that if he knew the real reason she'd worn the costume to the masquerade. But in essence, he was right. She wasn't going to say anything. If that had been her goal, she would have spilled her guts months ago when she'd first learned about his submissive streak.

"If I did this," she said, choosing her words carefully, "I wouldn't charge you like Rosalind would. I'm not a domme for hire, so if that's how you think of me, I'm going to say no right now."