There is no escape from the beautiful tropical island, Maizely Ortiz in the middle of Lake Superior. It defies detection as the Siren lures men into her embrace.

Lady Baliese plans world domination with a superior race of women. She uses captured male specimens as the sperm banks for her chosen women. The invitation, a coronation, gala affair for an artist friend, and the warning to bring comfortable shoes.

Will Jasmine, Jon and Weylyn find a way out and return to normal lives?


"No one knows what has happened to the men and ships swallowed by Lake Superior. I thought what if the similarities with the Bermuda Triangle or Atlantis were behind a force field that was undetectable and the source of the disappearances. Spider Island is the result. I hope you will be intrigued and entertained by the possibilities and the story." ~ Cricket ~ 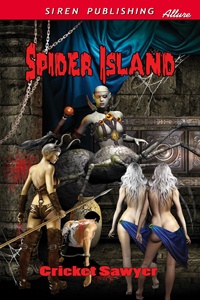 4 CHERRIES: "Ms. Sawyer writes a complex and interesting novel with lots of twists and turns to keep the reader hooked. Her characters are intelligent and independent, but know when to work together for the common good. The love scenes were steamy and imaginative. I also liked Ms. Sawyers creativity with this novella. The scenes on the island were rich with details, making the reader part of the story. If you want a sexy romance with plot twists galore and creative characters, then Spider Island is the novella for you." -- Tiger Lily, Whipped Cream Reviews

She rang for Portia. “Bring me a meal,” she ordered. Portia backed away jangling the heavy key chain from the wall as she removed it in preparation to fill her Lady’s request. “Does her Lady have a preference—dark or light skin today?”

Lady Baliese thought of the creamy white complexion of a former guest, how brilliant his crimson blood looked against his pale skin—she could nearly taste its delicious redness. His terrified blue eyes stark contrast to the red, became wide and horrified as he realized that as she drained his juices of manhood into her, she also sucked his blood. The Pavulon made resistance impossible and when Rue administered the lethal injection, at his precise realization, his climax fueled by terror exploded again and again into her in hot bursts until she thought she would explode with her fullness. Quickly, she had rolled off him before his blood supply became tainted with the Pavulon and she emptied his seed into the special cup where it would be quickly sucked up to be used to artificially inseminate a surrogate mother.

“Bring me the black man. I hunger for dark meat today,” she said with a flourish. The twins, Gemini and Geminee, entered as Portia left. They prepared Lady Baliese’s bath and bed for her lover’s final performance. Her memories of the last time had sufficiently warmed her that she would need little coaxing to enjoy sex with this new male. She slipped into the tepid bubble bath, the heady aroma of lavender tugged at her senses. She sank deeper into the swirling warmth of the water while the twin servants caressed her body with tiny gentle hands, making sure no spot on her had not been gently cleaned with lavender body wash.

They simultaneously slithered fingers in to her orifices to sooth even her inner places with their coddling, evoking love touches. They helped her to her feet and she stood while the shower rinsed the suds from her body. One twin tasted the cleanliness of her breasts, sucking on the hardened beads to be sure they were ready for her new mate. The second twin’s tongue explored the clitoris and deep reaches of her body. They guided her from the shower to the massage table where they lavished her with perfumed body oil. keeping her desire peaked as they worked.

A cool draft wafted over her body as Portia entered with the black man, his muscular body glistened from the fresh oil bath he had before being brought to her. His eyes opened wide with lust at the sight of Lady Baliese’s perfect body being fondled and kissed by the twins, deliberately prolonging their enjoyment of Lady Baliese’s body to peak his arousal. His notice manifested in the bulge growing in his tight bikini thongs. Portia walked him around in a circle for the ladies to drool over, then she took him to the bed and handcuffed him there, prone on his back, his great rod straining against the confinement of the cloth that covered him.

Lady Baliese sufficiently warmed dismissed the other women with a flourish of her hand. She slid the cage door shut on the panthers since they had a tendency to become aroused at her passion and wanted to be a part of the lovemaking. She snaked her way on to the bed beside the dark skinned male.

“You’re Ramón, am I correct?” she teased, licking his ear with her tongue, fucking it with the tip while he squirmed, wanting her tongue in other places she could feel his need.

“Yes.” He nearly moaned in response.

“Are you ready for a little pleasure, Ramón?” She ran  her tongue over his lips and then swallowing his mouth with hers before he could answer. He responded, sucking her tongue into his mouth. She knew the drugs he had been given. The hand oiled treatment he had received by Blaze and Trinede were enough to make even the staunchest male beg for release. He was putty, waiting for her to manipulate, but oh how she loved to tease. He squirmed, trying to rub his hardened rod into her, but she moved so only their lips could touch.

She ran her tongue down between his ribs, down, down his long muscular torso slowly to his tight abs and then into his navel. She fucked his navel with her tongue, while she fondled his balls. His penis strained at the thin cloth of his flimsy thong. She thought he would burst it soon if he became any more aroused. She nipped at the tip of his rod through the cloth and he bucked into her, trying to get into her mouth. She moved her tongue to an inner thigh, tracing circles as she teased between his legs closer to his balls. He writhed with need, moaning, “take me, take me,” in a raspy deep throated voice hoarse with want. She pulled back and rose to her knees smiling. He struggled against the hand cuffs. She put her hands under her breasts, lifting them in an ancient offering.

“You want these?” she teased in her sexiest deep throated voice.

“Yes,” he nearly shouted, his need dragging at him he writhed trying to get his head up to them. His tongue pleading to just taste the nectar of her.

She leaned over him and brushed the rigid buttons over his lips. His tongue darted out, catching a button and she allowed him to suckle it. He was hungry, oh so hungry. She felt the suck in her womb as he dragged at first one nipple and then the other with his sucking, hungry mouth, her own desire beginning to peak. She slid over top of him and lay to rub her cunt against his shaft still covered by the thong. He brought one leg up over her back and pulled her down into him harder. 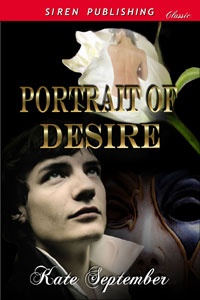