Heat Rating: Sextreme
Word Count: 33,577
74 Ratings (4.6)
BDSM Contemporary
In Bookshelf
In Cart
In Wish List
Available formats
PDF
ePub
HTML
Mobi
Cover Art by Les Byerley
Reviews
I gave this a 5 because I really like the story but I did get totally upset with Blade at points. I can understand why he did and said the things he did but I didn't agree with them. I'm so glad he totally redeemed himself and showed Kelly how much he DID love and adore her.
rhondavb
I love this series. Leah is an awesome writer. Keep up the great work.
granny
Read more... 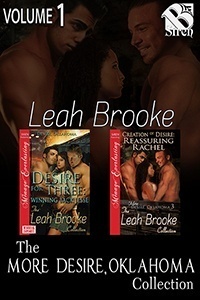 Flames of Desire: Courtney's Loving Dominants (MFM)
Leah Brooke
In Shelf
$5.99
All Books In Cart
All Books In Bookshelf
Excerpt

Blade forced a smile to hide his horror. “Because I want to hold you, and it’ll be faster.” Every minute seemed to last an eternity. Murmuring to Kelly, he tried to keep the terror out of his voice as he waited, while at the same time holding her gaze.

He knew what he had to do to calm her, but it had never been as difficult as now.

He’d wrapped her in the blanket, hoping she didn’t see the blood, but could even now feel it soaking the front of his trousers.

She looked pale—too pale. Her eyes glimmered with pain and fear, her hand moving almost continuously over her swollen abdomen.

God, he loved her. If anything happened to her…

The sound of the siren piercing the night sky had to be the most wonderful sound he’d ever heard.

She was too damned pale!

Her grip on him didn’t seem as strong as before, her small, pale hands almost lifeless in his. The fear and love in her eyes ripped at his heart, the trust in them giving him the strength he needed to push back the mind-numbing terror.

Forcing a smile, he touched his lips to hers, tightening his hold as if that would keep her from slipping away. “The ambulance is here. Just calm down. The doctor’s going to meet us at the hospital, and everything’s going to be fine, baby.”

Lifting her as gently as possible, he fought the urge to run outside, knowing that scaring her would only make things worse. As he’d expected, the ambulance attendants rushed toward him, along with Rafe Delgatto, one of the town deputies in Desire.

Rafe stopped abruptly, his eyes widening in horror when he saw the blanket wrapped around Kelly. Before he could say anything, Blade shook his head in a barely perceptible movement, glancing meaningfully to where Kelly rested her head against his shoulder with her eyes closed.

Rafe nodded, his expression softening when Kelly turned toward him. “I heard the call on the radio and rushed right over.” He touched Kelly’s arm, smiling when she lifted her head. “Hi, honey. Looks like you’re ready to have this baby. You feeling okay?”

Shaking, Kelly lifted her head and gave Rafe a tremulous smile. “I’m fine. My water broke, so I guess this is it.”

Rafe inclined his head, walking with them toward the waiting stretcher. “I think I’ll follow you in. There’ll be a lot of excitement in town when everyone finds out.”

Blade lowered his wife to the stretcher, smiling to hide his fear. “Let’s go have a baby.”

As the paramedics lifted her into the ambulance and began taking her vital signs, Blade turned his head, never taking his eyes from his beloved wife. “Rafe, can you give Jesse a call. Kelly’s gonna want her there.”

Rafe touched his shoulder, squeezing in support. “Of course. I’ll call Royce and King, too, and tell them what’s going on. She’s gonna be fine, Blade.”

“Yeah.” Blade stepped up into the ambulance, rushing to Kelly’s side, but he wasn’t fast enough.

Her face lost what little color she’d had, her eyes wild with terror. “Oh my God! Blade!”

Her cry ripped at him, and with a curse, he covered her again.

Tuning out the conversation between the paramedics, Blade leaned over his wife, taking her face in his hands. “I love you, Kelly. Please calm down. I’m here. Everything will be fine.”

Blade bent low, brushing her lips with his. “Calm down. You know how to do that. Breathe for me. Just focus on me and breathe. You’re going to be fine.”

Blade gripped her hand, his stomach knotted so tightly, he couldn’t breathe. “Sorry for what, baby?”

“I wanted so much to give you the son you wanted.”

Bringing her hand to his lips, he forced a smile. “You’re going to give him to me now. You just relax and breathe. We’ll get to the hospital soon, and everything’s going to be fine.”

Gripping her chin, he purposely hardened his tone. “Have I ever lied to you, Kelly? Now, you do what I say and relax, or there’ll be hell to pay when I get you back home.”

To his relief, Kelly smiled. “You don’t scare me anymore, tough guy.” Her sob ripped through him. “I love you, Blade. If anything happens to me, I want you to know that you’re everything to me.”

“I love you, too, baby. You’re my entire world. I promise, everything will be fine.”

Holding her hand, he prayed like never before as they raced to the hospital, promising himself that no matter what happened, he’d never put her through this again.

With a nonchalance that made his dominance over her even more pronounced, he circled the opening of her pussy with a firm finger, his gaze holding hers. “I’m delighted with your confidence, and think it’s sexy as hell, but don’t think for one minute that I won’t demand submission from you.”

Despite the hunger clawing at her, Kelly couldn’t hold back a smile. A moan escaped when his finger plunged into her, a moan she swallowed almost immediately.

“Careful, love.” Blade’s voice held a hint of warning that made her pussy clench on his finger. “You’ve been pushing me for days. Did you think I would let you get away with that forever?”

Bending low, he brushed his lips over her mound, his eyes steady on hers as he moved his finger inside her pussy, pressing at a spot that he knew drove her wild. “You’re my most valuable possession, love.”

Smiling at her gasp, he raised a brow. “Indignant, are you? Well, too bad. You knew what you were getting into when you married me, and you’ve been pushing my limits to see how far you could go. This body is mine, and I’m taking care of it the way I see fit. You really have no say in it at all, so you’d better start behaving yourself.”

He tapped her clit, his eyes narrowing when she jolted and gasped. “Keep absolutely still. No squirming. No jolting. Brace yourself, Kelly. I want to enjoy you and I don’t want you moving around while I do it.”

Knowing how good her husband was with that decadent mouth, Kelly sucked in another breath and nodded, squeezing her eyes closed as he lowered his head.

Blade moved his finger again, his slow strokes pressing against her inner walls. “Not a sound, and you stay exactly like this.”

Her pussy clamped down on his finger, her clit throbbing at the feel of his warm breath caressing it.

Something about Blade seemed different, but with desire clouding her thoughts, she couldn’t focus enough to figure out what.

Holding her breath, she waited, knowing just how potent and wicked her devious husband could be, but even after all the time she’d been married to him, she wasn’t prepared for the intensity of his lips closing over her clit, nor for the strong tug as he sucked her clit hard.

Too aroused to hold back, she cried out at the sharp sensation, the tingling heat so extreme, she pushed her heels against the mattress to jerk away, groaning in frustration at the loss of contact.

Rushing to pull her knees back up again, she squeezed her eyes closed, her breath coming out in hoarse whimpers.

Hanging on the edge, Kelly fought the warning tingles, so close to coming that she wanted to scream. Frustrated that Blade let her get away, she waited with breathless anticipation for him to pull her back and put his mouth on her again.

Trembling as the tingling grew stronger, the pleasure holding her on the razor sharp edge, Kelly whimpered in agony and looked down to see him braced on an elbow and watching her.

Gritting her teeth, she spread her thighs wider. “Please!”

Blade’s cold smile sent a chill through her, one that did nothing to cool the heat raging through her. “It seems you’ve forgotten quite a bit, love. Or, did you think that I was going to be more lenient with you now?”

Stunned, Kelly could only stare at him as he rose from the bed to stand beside her.

She knew this Blade, and yet she didn’t.

The Master she knew well lay somewhere behind Blade’s dark, glittering eyes—the doting and overprotective husband apparent in the slight smile that played at his lips.

There was something, though, different about both of them—something she couldn’t quite put her finger on—but that she wanted with every fiber of her being.

“Blade!” She couldn’t stay silent, but she kept her voice at a whisper. “Please.” Releasing her grip, she reached for him and started to rise. “I want—”

His smile fell, his expression hardening. “Did I tell you that you could move?”

Swallowing heavily, Kelly spread her knees and slowly lifted them to her chest, using her hands against the bottom of her inner thighs to keep them there. Taking a shuddering breath at the sharp awareness as Blade’s heated gaze lingered on her slit, Kelly bit her lip to hold back another moan.

Blade moved to her side again and towered over her, running his hand up and down her shin, his expression hard and much colder. “You were told not to move, and you moved. You were told not to speak, and you spoke. You’re obviously not as ready for this as you claimed.”

It struck her suddenly how tender he’d been over the last year.

She’d almost forgotten the thrill that went through her when he looked at her with that gleam in his eyes.

Blade tapped her clit, his eyes narrowing when she stiffened and gasped. “Very good.”

The mattress dipped as he knelt on it again and positioned himself between her thighs. “It appears you think I’ve gone soft.”

Her gaze went to his cock, her mouth going dry even as her pussy leaked more moisture.

Blade smiled faintly. “No, not there. I’m always hard for you.” Gripping the backs of her knees, he nodded toward the headboard. “Hold on to the headboard and don’t let go.”

Positioning his cock at her pussy entrance, he raised a brow. “Because you disobeyed me, you won’t be coming tonight.”