Winston removed his chain mail with a huge sigh of relief, and poured cold well water over his head happily. A quick swim in a nearby river would have been even better, but the chilly freshness of the water was very refreshing on his hot, sweaty body. Late summer was always the traditional time for battle, once the muddy tracks had dried out and the crops were harvested. But today was still midsummer and the weather had been unpleasantly hot. He rubbed his hands over his body to remove the worst of the water and then shook his shoulder-length, dark brown hair like a dog to get rid of the excess water.

He considered drying himself on his tunic, but the sun was still quite hot enough to dry him in minutes so he stood back from the well as the other men washed, before sighing and dropping his tunic over his bare chest. It would have been good to wash his entire body, but a swordsman never removed his chausses when women and children were around, as they were right now in the courtyard of this manor house. Besides, he was still wearing his boots. He wondered whether he ought to put on a surcote but it was too hot to want another layer of clothing, and he didn’t think he needed to get dressed up for dinner just yet.

When the men who’d declared he could speak for them were ready, he led them into the hall. Once again he recognized the signs that this was a well-to-do family. The room was large and already servants were setting up long trestle tables and benches for the meal. There were banners and embroidered hangings on the walls, demonstrating years of hard work by the lady of the house and her female attendants.

Carved wooden chairs with arms were behind the high table. Four of them, not just one for the lord of the house.

A manservant brought around a large pitcher of ale and filled their tankards, which Winston was very grateful for. He’d drunk some water at the well, but the ale was much more thirst-quenching than plain water.

The man who led the other group of swordsmen, Bancroft, and his men joined them and Winston stepped back to include them in the group. They would all have a much stronger bargaining position as a single group, rather than as two opposing sides, and he’d liked what he’d seen of Bancroft on the ride here. He seemed to be an honorable man.

“We should talk, you and I, before the official meeting,” said Bancroft.

Winston moved farther away from the rest of his men and the two of them crossed over to stand by the side wall of the hall. “I agree. United we have more authority. Although this entire situation is a huge pile of turds.”

“That’s true. We have limited choices as to where we go and what we do from here.”

“We were promised ongoing employment as castle guards for Lord Howard. I suppose you were told much the same story.”

“A purse of silver each and the position as guards, yes. It’s good Lord Garrick has promised to pay us, but silver won’t last long with no means of earning more,” said Bancroft.

“And therein lies the problem. I don’t wish to fight in the Holy Land. Nor do I wish to join in the border wars against the Scottish lords.”

“No indeed. They’re King Edward’s battles, not mine. Yet London will be the only place to find a new lord to serve.”

Winston crossed his arms and stared at the other swordsman. He spoke like a man of intelligence and leadership, just the kind of person Winston liked best. Someone who genuinely understood the situation and didn’t offer any silly suggestions that wouldn’t solve the problem. He was also a fine figure of a man. Tall and muscular, broad of shoulder and sturdy of limb. His hair was dark blond and his eyes pale blue, but it was the smile on his face and the intelligence in those pale blue eyes that pleased Winston the most.

“I’ll be more wary before I shake hands this time, though,” said Bancroft.

“Fuck, yes. Me, too. If we journey back to London as a group we’ll be safe from masterless men even traveling more slowly with the wagon.”

“Why do you have the wagon? I mean, I understand its use in transporting goods, but it’s also a disadvantage in that it attracts the attention of men wishing to steal whatever it contains.”

“Ah, but we had hoped to win the battle and have secure employment. I suspect Lord Howard only gave it to us because he was trying to outdo Lord Bolton. I doubt very much that he was truly concerned for our welfare. We were not hired as a group but as individuals. Many of us met for the first time on the battlefield this morning. I and a few others spent last night at Lord Howard’s castle, though.”

Bancroft nodded and looked thoughtful. “Tomorrow we’ll join as a group to return to London. Agreed?”

“We have something special. A connection few men can boast of.” Bancroft kept his voice low, barely able to be heard on the hushed night air.

Winston spoke in the same manner. A skill learned early by warriors, it was the kind of sound that wouldn’t carry even in silence.

“I feel it, too.” Winston squeezed his hand and the tension in Bancroft’s shoulders relaxed. Winston felt as he did, and wanted to explore the connection just as he did.

Bancroft took off his cloak and laid it on the ground underneath the wagon, then rolled under the wagon to lie on the cloak. He beckoned to Winston, certain that his movement would be visible to him, although not to anyone who might enter the courtyard.

Winston crawled under the wagon and then spread his cloak over them, covering them from their heads to their feet. Now their bodies were almost invisible and they had to rely on the sense of touch.

Bancroft couldn’t wait another moment. He reached for Winston’s waist, found the drawstring to his chausses, unfastened it, and pushed them down to his knees.

Winston’s cock bobbed out to greet him, a thick, long shaft, more than ready to be stroked.

Winston grabbed his hair in a tight grip, trying to convince Bancroft to take his cock deeper into his mouth. Bancroft shook his head, even though that made his eyes water at the force of Winston’s tugging on his hair roots. “Oh no, no, no. I won’t be dictated to by you in this matter, swordsman. Right now I’m the man in charge of your sword and I’ll not sheathe it in my mouth until I decide the time is right.”

“Very well. I shall be patient. For the moment.”

Bancroft snorted at Winston’s contradictory speech, but wasn’t surprised by it. The man’s cock was huge and more pre-cum was leaking from the head.

“Tasty,” he murmured sucking the cockhead again, before licking a line along Winston’s lower belly, and then sucking his balls.

Winston’s hair and eyes were dark brown, and the dark hair surrounding his balls made it difficult to see with so little light seeping through the cloak. But unerringly Bancroft’s fingers found what he wanted, and he rolled Winston’s balls before stroking the insides of his thighs and then diving farther back to stroke his butt crack and massage his ass.

Now when Bancroft sucked his cock he held Winston’s ass in both his hands, rubbing his fingers around Winston’s rosette. Winston’s hips were pumping his cock up into Bancroft’s mouth and gradually Bancroft swallowed him all the way down. They weren’t in the ideal position for such games, but fucking in the courtyard, even under the wagon in the dark, was acting dangerously enough without them making it even more obvious what they were doing. Besides, this was just the beginning. He planned to have his cock in Winston’s ass before much longer.

“Let me prepare you,” Winston said.

Winston wiggled up and pushed Bancroft down, before taking Bancroft’s aching, hungry dick into his mouth and wetting it thoroughly.

“You do that so well,” Bancroft whispered.

“No better than you did.”

Bancroft turned Winston onto his belly, and then made sure the cloak still covered them completely, before removing his chausses. At some stage, Winston had pulled his feet out of his own chausses, and Bancroft made sure both pairs were hidden under their bodies, not where they might be seen.

Plenty of people removed their boots to sleep, although others didn’t. But very few indeed undressed. He and Winston needed to be completely dressed again before anyone saw them in the morning.

But right now, all he could think of was pushing his cock into Winston’s ass. He’d been holding and massaging that delicious piece of flesh and his hands already knew how those tight ass muscles would grip his cock and give him great pleasure. His hands had stroked and rubbed and massaged every inch of the outside of Winston’s hard-muscled posterior, and Bancroft was almost drooling at his thoughts of how it would feel to have his cock inside the one man who he wanted to stay with and build a future with. 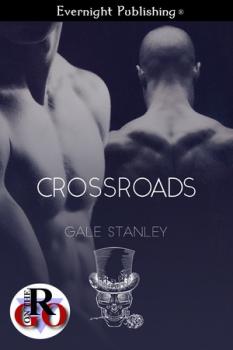