The Chisholms of Texas 4

Eli Chisholm is a man with a plan. Always. He got his college degree and now plans to win two bull riding championships back-to-back. Once done, he'll go to work for the family business. Eli is working on the second championship when he meets a tough girl from the wrong side of the tracks and loses his heart. Joie Harding has had a hard life. In foster care since she was eight, Joie has been moved around a lot. On her deathbed, her mother gives Joie a clue about how to find her father. Joie takes off to find the man and, along the way, she meets a brash young cowboy who plans his life down to the finest detail, rides bucking bulls, and becomes her best friend. When the unthinkable happens, will their young love survive or be forgotten? Is Joie destined to repeat her mother's mistakes?

The Chisholms of Texas 4

More From The Chisholms of Texas

While Ricky ordered a shot of liquid courage, Eli walked around the bar and slid into the seat right next to the beautiful woman. When the opening lines to “Eight Second Ride” by Jake Owen came on, he sang along with a cocky smile as he swiveled on his seat to face her. When he asked if she was alone or with someone, she responded immediately with the next line to the song and a look of undiluted surprise on her face. Eli had to smile when he realized that Tinkerbell had recognized the opening lines to the song and blurted them out without thinking. She stopped her nervous laughter quickly and just looked at him as he sat next to her at the bar. Eli could feel a zing go through him as dark-green eyes peered back at him with undisguised interest.

“If that’s your only pickup line, cowboy, you’re in trouble,” she said, obviously trying to keep the smile off her face.

“I was taking a chance. Either you were going to know they were the lyrics to a song or you were gonna bust my chops. I’m glad I took the chance. My name’s Eli Chisholm. What’s yours?”

“I know who you are, Eli Chisholm. You’re a bull rider, and, not to make your head swell any more than it probably already has, you’re a good one. You’re also a buckle bunny slut and like to drink. I’m not a buckle bunny, and I’m not drinking alcohol. That’s oh for two. Go find someone else to fuck for the night. It’s not going to be me. Just ’cause I’m new around the circuit doesn’t mean I’m stupid.”

Despite being inexplicably drawn to this tall drink of water with his dark good looks, emerald-green eyes, and sinful smile, Joie spoke to him in a hard voice garnered through years of experience of living life in the streets and questionable foster homes.

“Whoa, there, Tinkerbell. I’m not hitting on you. I swear,” he said as he took a small step back and raised his arms in a defensive gesture.

“Don’t call me that. I’m not that goddamn short.”

“Your honor is safe with me, I swear. I was just trying to head off my friend over there from getting involved with some jailbait.”

“I’m not jailbait. I’ll be twenty-two soon.” Joie was lying, but that was what the information on her fake ID said, so she was sticking to it.

“Yeah, how many years will that take?”

“Smartass.” Suddenly it occurred to Joie that Eli Chisholm could be a good resource for her in finding her father. He was a bull rider and claimed he wasn’t hitting on her. Not that she totally believed him on that score. She knew his reputation. Still, having him on her side as she searched for her father couldn’t hurt. She just needed to make it plain she wasn’t looking to hook up with anyone. His interest would fade pretty fast once he figured out he wasn’t getting into her panties. He’d move on to the next girl. Taking a chance, she said, “I’m just looking for someone.”

“Someone specific or just someone?” he asked as he gave her what she was sure was his most beguiling smile.

“Someone specific, cowboy.” This guy was really beginning to annoy her. Sure, he was easy on the eyes, but even if she was interested, he was way too tall for her. He had to be at least six foot three inches tall. She knew this both from how much he towered over her and from listening to his stats at the various events she’d been to so far. He was wearing a Kenny Chesney T-shirt with faded Wranglers and cowboy boots. She could see the lean muscles in his forearms and biceps and knew from the fit of that T-shirt that there wasn’t an ounce of fat on the man. If he took off his shirt right now, she’d see a set of washboard abs along with strong pecs.

She’d seen him shirtless when she and the girls had gotten a room at a hotel at the last stop in order to shower and do laundry. She’d heard of six-pack abs but had never seen any in person. Impressive was all she could say about him. She wondered if the rest of his body was as impressive then berated herself for her lascivious thoughts.

The hotel had several coin-operated washers and dryers in a common area, and on her way back from getting ice, she’d seen Eli come out of his room. It just so happened to be right next to where she and the girls were staying, and he’d been wearing only a pair of tight running shorts. She’d thought at the time that his lower half was just as buff as his top half. His thighs and calves were bulging with muscle under the unblemished darkened skin that had nothing to do with exposure to the sun. He must have either Native American or Hispanic blood in him. Whatever led to that strong chin, chiseled nose, and high cheekbones and forehead, it was spectacular. He wore his shoulder-length hair longer than any of the other riders on the circuit. In one of their long conversations after they started to hang out together, Joie harangued him about his good looks. She accused him of growing his hair long just because it made him sexier to the female fans of the sport. Eli didn’t exactly deny it, though he told Joie this was the longest he could get away with and not piss off the sponsors.

“You’ve got an accent, sweetness. Where are you from?”

“I’m not the one with the accent, cowboy. You’re the one with the Southern drawl. I speak plain English.” When he kept looking at her inquisitively, she sighed. “Actually, I’m from South Dakota. Now, will you please go away?”

Eli’s cock was hard and pulsing. It was always this way. He pulled her up into his arms so they were face to face then nipped at her pouty lips until she let him in. Once in, he ravaged her mouth, thrusting his tongue inside to claim every luscious part. His other hand rested on her buttocks as he held her so close there wasn’t a millimeter separating them and his hard-on nestled against her thigh. He slowly and thoroughly devoured her mouth.

Eli’s hips thrust against her, his raging cock mindlessly seeking the hot, moist warmth lying under her clothing. He groaned when her hands crept under his shirt to massage his heaving chest. When she found his nipples, he broke off the kiss and lifted her onto the bed. Joie immediately went for the button on his jeans and lowered the fly over the throbbing erection they were covering. While she was taking care of the clothes on his lower body, Eli was stripping her of her T-shirt and bra. As she pushed his jeans and boxer briefs down over his hips, letting loose his straining cock, he whipped his own shirt up and over his head, throwing it onto the floor beside him.

“Easy, baby. The head is attached,” he told her, and her grip loosened slightly as she bent down to lick the pre-cum that had gathered at the slit. She angled his cock up to her mouth, and the air shot out of his mouth as her tongue circled the head. The tip of her tongue dug into the sensitive spot just beneath. Eli grabbed onto her head at the back of her neck and held her still as he fed her most of his cock until she had taken him in as deeply as she could.

“Holy shit,” he muttered, sliding his hips forward to meet her mouth. She hummed her satisfaction, and it vibrated up his cock. Shoving his jeans down further, she cupped and fondled his balls. He thought he’d jump out of his skin when she licked down his shaft using her tongue to trace the veins running the length of his dick.

Her mouth kept even pressure, keeping him nice and wet as he began to roll his hips, fucking into her while he grabbed another handful of her short black hair tightly in his other fist. He held her head just the way he wanted as he moved his cock in and out of her sweet mouth. He felt his balls draw tight against his body, and orgasm washed over him from the back of his scalp and barreled toward his swollen cock at hyper-speed. Clenching his jaw to hold back his roar of completion, he shot down her throat. She swallowed it all, looking up at him with her heart in her eyes. Slowly, she edged back from him, and his now-flaccid penis slipped out of her mouth with a pop.

Joie quickly lay down on her back and watched him with lust in her eyes as he leaned over the bed to unbutton and unzip her well-worn jeans. She lifted her hips off the bed as he eased the jeans over her hips and down her legs. Once off, he let them fall to the floor, and he crawled onto the bed, hovering over her as he took her lips again in a scorching kiss. Crawling backward down her body, he paid homage to her breasts as he rasped her nipples with his tongue and teeth, turning her nipples into hard little nubs.

Slowly, he made his way down her body, trailing kisses along her belly as his hands traveled roughly up her thighs, stroking, kneading, and tantalizing her. His tongue circled her navel then headed south to kiss the top of her mound. Hot air blew over her exposed pussy, and a hot tongue traced her clit. Joie gasped and her fingers clawed at the bed with the sensations assaulting her. Eli groaned and licked her again. He pressed tighter against her pussy, moved his tongue, and she moaned as the sensations of pleasure reached her brain. It felt really good. Her back arched off the mattress.

Eli was merciless with his tongue, licking and sucking on the small bundle of nerves. He moved in closer and shoved her legs wider, nuzzling his mouth tighter against her sex. It felt so intense it nearly hurt. She couldn’t stop her hips from bucking against his mouth while she was gripped in the throes of passion. His mouth grew more aggressive, and a moan tore from her throat. Eli was doing amazing things to her with his lips and tongue. The sensation was overriding everything inside her until all that was left was pure pleasure. 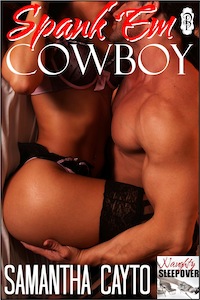