Ginger has never really enjoyed Christmas. It reminds her that she’ll always be alone because of her curse. She yearns to be with someone, but if she doesn’t click with them right away, her hunger grows until her human façade falls away revealing her true self. The guilt of all the innocent lives she’s taken plagues her and this holiday season isn’t looking to be any different. Just once she’d like someone to call her own so she can feel human.

Zach and Cameron are two werewolves who stumble into Ginger’s bakery to set up a Christmas party for their benefactor. Zach can’t get Ginger from his mind, but in order to be with her he hopes Cameron can get along with her too. If not, then the unthinkable will happen. All the while, Ginger has another suitor who intends to claim her for himself at any cost. Zach and Cameron will do anything to save her because all they want to do is spend Christmas with the woman they love. 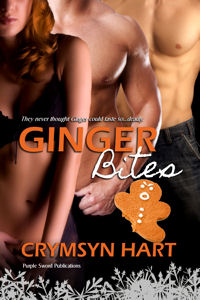 “Why are you so infatuated with that woman?” Cameron asked.

Zach sighed and focused on his meal. His best friend and pack mate was right. Why was he so obsessed with the woman from the bakery? Her card remained in his pocket, but her image was burned into his mind. He never expected to walk into the bakery and find a woman who he could not wipe from his thoughts. Something about her had gotten under his skin. “I don’t know. I wasn’t looking for this to happen, but there’s just something about her. If we didn’t have this stupid gathering then this never would have happened.”

Cameron sighed. “Whatever our generous benefactor wants, we do. He told us to go to the bakery, so we did. We’re just the grunts.”

He shook his head. “Grunts or not, we do what we’re told so we don’t have to worry about being under his highness’s watchful eye. That’s all we need again. It seems the mighty one has set his eyes on us, and we have to do what he says.”

“It would be easier if you put her out of your mind. I don’t care how attractive she is. She’ll only get you a good lay.”

Zach speared his piece of steak and gnawed on it. The blood ran down his throat, but all he could smell was the gingerbread that had inflamed his senses. All he could think about or even dream about was the woman in the bakery. Her soft touch and the frustration she had when they had asked to do the party. It seemed she had wanted to kill the both of them, but that could have been some leftover anger from the customer before them. Zach had heard the end of the conversation with the woman and her son before they had walked in. She had a temper on her, and he appreciated that in a woman. She had all the right curves in all the right places. His mouth watered at the thought of kissing those sexy lips and seeing what she actually tasted like. It did not matter they were tasked with setting up a party for the benefactor who kept them safe and the one their pack master bowed down to. It did not matter if his friend and longtime pack mate said they had to put their thoughts toward this stupid Christmas party. The mating instinct had been triggered inside of him.

The woman in the bakery had admitted she knew what they were, and he did not even know what she was. And that was one of the mysteries that had him chomping at the bit. Zach wanted to call her, but what Cameron said was true; they were a package deal. When they were young, they had pissed off the pack’s patron so now if they were more than a hundred feet from one another…he shivered to think about it and pushed the thought from his mind.

“Cameron, it’s not that simple. I want her. I can’t help it. I’ve tried to erase her from my mind, but it only gets worse. She’s the one.”

His friend finished his draft beer and signaled for the check. “Just like Mirabelle was the one and you had to have her.”

Zach smiled, remembering Mirabelle Jenkins. Those wide, innocent blue eyes had batted at him every time he had gone into the coffee shop. Her image faded, and the baker’s popped back into his thoughts. “Yeah, Mirabelle was a good piece of ass, but this is different. I don’t want to just fuck this one the way I did with Mirabelle. There’s something else about her. I want to be with her. You know, make pups and all that crap we’ve talked about, but never thought it would happen because of our wonderful condition.”

The other wolf grunted. “Yeah, that. So if you think she’s the mate of your dreams, why haven’t you called her yet?”

“Because you have to be into her too, man. We’re a pair so if you don’t want to share her then what’s the point?” 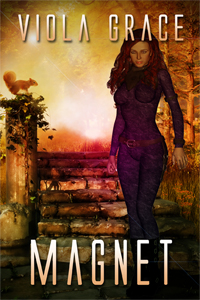