Gods and Mummies, Oh My!

Just when Kalliope’s picking out her wedding dress, Anubis, the Egyptian God of the Dead, comes begging for help. Not able to refuse him, she finds herself up to her ears in sand, rampaging mummies, and a jealous ex-lover who’ll stop at nothing to keep her from getting married. The only thing that keeps her going is her love for Lugh. Not even he can help Kalliope out of her sandy situation. With her trusty frog familiar at her side, she braves ancient tombs and Egyptian curses to make it to the altar on time. 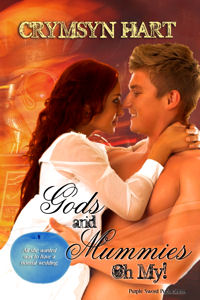 Gods and Mummies, Oh My!

“Kalliope, are you okay?”

She sat up slowly and wiped the water from her eyes. Her torch was set in the sand a few feet away from her, and Ginger was hopping down the last few steps. The man before her was drop-dead gorgeous with curves in all the right places. There was a faint sweet scent around him. She licked her lips. His dark hair fell across his forehead like pieces of shaved chocolate. She reached out to touch him, but found that her hand passed through him. He seemed to be a ghost.

“What the hell? That has to stop happening,” he said.

Kalliope wasn’t sure what to make of him. “What has to stop happening?”

“I don’t know what it is, but ever since I woke up here, my power has been flickering in and out. It’s like I’m disconnected from my body. Sometimes I’m solid, and other times I’m not. This is very strange.”

She wasn’t sure what he was rambling about, but he reached out and took her hand. This time, it didn’t pass through hers. The inside of his palm was soft and silky the way whipped cream was on the top of a cheesecake. The image of a cherry-covered cheesecake came to mind and then she shook it from her thoughts.

Her stomach growled. It has to be because of the lack of food.

“What are you doing here anyway?”

She gazed into his intense hazelnut brown eyes. “I’m sorry, but do we know one another?”

He seemed puzzled. “Kalliope, it’s David. You know, the hunky, smooth cheesecake god that you lust after all the time.”

She glanced at her ring and back at him, but her gut said that he wasn’t the one who gave it to her. She shook her head. “I’m sorry, but I don’t know who you are. And really, are cheesecake gods real? That seems a little absurd.”

He stood up and dusted himself off. After a moment, he snapped his fingers and his very shape changed. She gasped because before her was no longer the deviously striking man, but a large, plain round cheesecake. All his appendages and his facial features appeared as if they were off a Mr. Potato head doll. She backed away. This whole scenario was already a bad nightmare. Now it was just getting worse.

“Good God, what the hell are you?” she cried.

The cheesecake’s red plastic lips turned into a frown. His plastic, round, black eyes squinted. The more she gawked, the more she found him comical. There was no way this being before her was a god. Of course, she was saying that three-foot talking spiders didn’t exist either, but they did. He walked toward her with his oversized white hands outstretched to her. “I won’t hurt you. Whatever they did to you, you have to know I would never hurt you. You mean too much to me for that to happen.”

He reached out and touched her chin. When he did, his appearance changed. Fleshly fingers touched her skin instead of the fake limbs she had just seen. His gaze bored into hers. Whatever magick he had pressed upon her evaporated. She smelled vanilla and peppermint. She licked her lips. He leaned in to kiss her, but stumbled right through her. Kalliope gasped at the sudden cold chill that followed.

“Argh. This is so annoying. Let’s try this again.” His brow furrowed, and she couldn’t see through him any longer. He gave her a cocky grin and kissed her lightly. At first, she didn’t mind the kiss. It was soft and nice. It made her remember that somewhere out there, people did exist, and she wasn’t stuck wherever she was stuck. David deepened the kiss. His power washed over her full force. She got all hot and bothered and began to return the kiss, but halfway through, it didn’t feel right.

Placing a hand on his chest, she reluctantly separated from him, already missing the warmth of his body. “I’m sorry, but this...whatever it was, although it was really nice, you and I aren’t together in that way. I may not know you, but I do know that. Whoever I’m with, I really wish I could remember him. Do you know him?”

David touched her cheek. Her knees shook when he did, but she was not going to let her body dictate whose arms she was going to fall into. She was all about finding the person who gave her the ring. “They never should have done this to you.”