When thirty-five-year-old Jack Montrose returns to Club Submission for the first time in three years, he’s immediately drawn to Sara Deveraux, a twenty-eight-year-old stunning beauty. Dressed to kill, she’s sexually alluring, and everything he desires in a woman.

A proficient rope player and Master of Club Submission in his own right, Jack Montrose knows how to please a lady. But has he met his match in the sexy woman wearing high heels and latex?

Still smarting from the breakup with her ex who severely compromised her safety during a bondage scene, Sara is undeniably wary of the new Dom in town. Although he’s so self-assured, and handsome, is she really willing to place her trust in him?

Using his skills as a rope player and natural dominant, can Jack convince Sara that he is serious about her safety? Will trust eventually blossom between them?

Note: This for-sale version has been revised and expanded and is at 15,918 words. The original short version at 11,698 words is available for free only inside the BookStrand App.

Jan Bowles is a Siren-exclusive author.

5 STARS: "Her Dream Dom is the 5.5 book in the Masters of Submission series by Jan Bowles. While this book is part of a series it can be read and enjoyed as a standalone novel. Jack Montrose is back at Club Submission after a three year absence and he is drawn to Sara Deveraux. Jack is a Dom who enjoys playing with rope and is looking for a sub to play with that enjoys it as well. Jack is a hot and sexy Dom. Sara has had a bad Dom who compromised her safety during a bondage scene so Jack through her for a loop. I admire Sara, she knows what she wants in her sex life and is willing to try to fulfill it even after a bad start. The chemistry between Sara and Jack is scorching right from the first time they saw each other. The sex scenes were not just hot but realistic as well. Sara and Jack are a great match for each other as long as they trust each other. I found this book well written with interesting and engaging characters. Ms. Bowles writing just comes alive within the pages of this book. Overall, this is a wonderful book. While I have read several books in this series this is the best yet. I can’t wait for the next book in the series." -- Melissa, Romancing the Book

A Dom to Love, Honor, and Obey (MF)
Jan Bowles
In Shelf
$2.99
All Books In Cart
All Books In Bookshelf
Excerpt

Jack cupped her chin and angled her face to his. He leaned over and kissed her, sending her world into sensory overload. When she parted her lips on a sigh, his tongue snaked inside her mouth to weave with hers. All the while his hands gripped deliciously on her upper arms. She knew he was doing it on purpose, making her feel as though his fingers were tight bindings compressing her flesh.

He drifted his kisses to the fast beating pulse at the base of her throat and tasted it with his tongue. She figured he was testing her reactions, seeing how much he turned her on. Well, she was on fire.

Looking pleased with what he found, his eyes burned fiercely into hers. “Mmm, I think you and I are gonna get along real fine. Just think of rope bondage as an extension of my hands,” he murmured, brushing his lips to her ear and teasing the sensitive lobe with his teeth. Pulses of pure pleasure began flooding her body, making her squirm in anticipation.

“Every rope, knot, and cord that I tie will be placed against your naked flesh in order to achieve maximum benefit and ultimate sensory overload. Just think about it, Sara. How would you like to feel my hands all over your body, all at the same time?”

It sounded like heaven to her. She closed her eyes as an image of her bound and at his mercy surfaced in her mind. With her imagination working overtime, a gasp of pure pleasure slipped from her lips. The incredible feeling of being dominated by such a sexy guy totally consumed her. Overwhelmed by his sheer presence, she allowed her head to tilt back, exposing her vulnerable neck even more to his mouth.

Whatever this guy was doing to her, he aroused her with words alone. Just how would she feel when under his complete control?

“Yes,” she whispered on a sigh, finally surrendering to his will. Sara could scarcely believe she’d agreed, but her pussy throbbed with sexual excitement. It was why she came to Club Submission. Here, her fantasies could be fulfilled, and Jack might just turn out to be her dream lover.

Slowly, he undid the sash at her waist, peeling the silk back inch by inch. His fingers glanced tantalizingly across her naked flesh as he brushed her robe apart. “Sara.” His voice was low and husky. “Your breasts are magnificent. They’re so ripe and plump. Just think how much fuller they will look when I enhance them with my rope.” He leaned down and swirled the flat of his tongue across her pebbled nipple with such force, her whole breast jiggled.

“Mmm, I’m gonna eat you all up very, very slowly.” He moved his hand lower, peeling her silk robe away until her shaved pussy begged for his fingers.

“Open your legs.” His masterful commands could not be ignored, and she complied, spreading her legs wider. His touch, soft, fleeting, made the ache in her pussy intensify.

Jack’s mouth covered hers the exact moment his fingers slid along her clit, hard and welcoming. Positioned above her, he looked down into her eyes, stroking her, squeezing the tender nub between his finger and thumb.

“Baby, slip the robe off your shoulders.”

When she did as he requested, he kept his hand firmly between her legs, teasing her clit, until she finally shrugged off the silk garment.

“Your body is superb. Perfect for what I have in mind.” Although spoken with a soft, controlled voice, she couldn’t help but notice the wicked gleam in his eyes. Instead of frightening her, his words only added to her arousal, stimulating her more.

Jack was breathtakingly handsome. His rugged features heightened his masculinity. She wanted him to control her, bring her to the edge of climax, and worship her body with his rope. Her hands circled his strong neck, threading through his hair, drawing him down for a deep, passionate kiss.

“First I’m gonna wind you up so tight, it’ll be like I’m touching your entire body. Then I’m gonna stretch you wide.” He peppered kisses to her breasts, then circled each nipple in turn with his tongue, making them glisten in the subdued lighting. “You’ll be so wide, everything will be exposed and open to me.”

A spasm pulsed in her womb as she visualized the scene. Jack slid his fingers deep inside her pussy. “Oh, baby, you’ve gone so wet.” He growled. “I can tell just the idea of bondage turns you on.”

A cry of euphoric pleasure left her lips as she hurtled toward oblivion. Would he leave her hanging, as so many Masters wanted to do? Oh, God, I hope not. 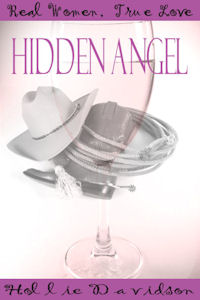 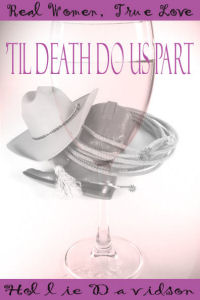 'Til Death Do Us Part
Hollie Davidson
In Shelf
$1.99