After being abandoned by yet another lame blind date, Heidi was almost done.  While contemplating her loser love life Finn Wild literally runs into her.  Covered with food and embarrassed beyond belief Heidi leaves, wondering if she’ll ever see the beautiful man who ran into her again.  After a fire at her apartment, the man of her dreams rescues her and her loved pet birds.  She finds out that there’s not just Finn, but he has two brothers and they are all interested in her.  Not sure about dating three men Heidi proceeds cautiously.

While dating and having fun with the three brothers strange things start happening.  Then, Oliver, her last lame date returns and things become even stranger.  When Oliver threatens Heidi, her best friend Brenda, and her loved pets, can the Wild brothers rescue her before the worst happens?

Four Flames for Angela (LoveXtreme)
Rose Nickol
In Shelf
$4.50
All Books In Cart
All Books In Bookshelf
Excerpt

A few more days had passed, and Heidi still hadn’t heard from Finn even though she’d given Brenda permission to give her number out. She wondered what had happened to change his mind. She was lying in bed reading when she heard a pounding on her apartment door, and the smoke alarm began to sound.

“Anyone in there?” the male voice boomed through the door.

“I’m coming,” she screamed. trying to figure out if she should grab anything or not.

“You need to hurry,” the voice continued, and the pounding began again.

Heidi quickly pulled her robe on over the T-shirt she had been sleeping in and stuffed her sockless feet in a pair of tennis shoes. She quickly looked around at her apartment, her home for the last five years, and grabbed her purse. She opened the door, and there stood two firemen. She knew it wasn’t Stan because he would have known her apartment, but other than that had no clue. The man was wearing an oxygen mask and his hat, which hid his face.

“Miss, you have to hurry. Do you have any animals?”

“My babies. I have birds, in cages, in the back room. Please save them.”

“Five in three cages. Please.” The thought of losing her babies had her crying.

The other firefighter escorted her out of the building, to the fire escape.  The air around them was filled with smoke.  As they reached the ground Heidi could see the burning building.  The fireman guided her safely around the burning apartment out to the front walk. “Miss, wait here. Someone will let you know what to do.”

Heidi stood on the sidewalk with the other residents of the building as more people were brought out. She hadn’t seen her babies yet but figured they were trying to get all the people out before they got the animals. It was probably only minutes but seemed like hours before a woman with a clipboard walked up to her.

“If I could have your name and apartment number. I also need to know if you had any animals?”

Heidi gave her the information requested and continued to wait. A few minutes later another woman came up to her. “Ms. Rundle?” At Heidi’s nod, she said, “Please come with me.” She followed the woman around the building to the side where a tent had been set up. “If you could identify yours, you can take them now.”

Heidi walked over to where several bird cages had been lined up and knelt down. All the birds were very quiet, but Bubbles her little yellow parakeet perked up when she heard Heidi coo to them. She had a total of five parakeets all different colors. “They should be okay. You might want to get them checked, as birds are more likely to be affected by smoke than the other animals. You won’t be able to take them back into the building. No one is going to be allowed back in until the building is inspected and declared safe.”

Heidi nodded. That made sense. “Do you have someplace you can go tonight? If not, we have a shelter set up, but you can’t take the birds with you. You’ll have to make other arrangements for them.”

She nodded again. She sat on the ground and started talking to her babies, assuring them it was going to be okay and that she would take care of them, but didn’t really have a clue as to what she was going to do.

She wasn’t sure how long she’d sat there when she felt a hand on her shoulder. “Heidi, is that you?”

She looked up and saw Stan and Brenda standing there. “We came as soon as we heard it was your apartment complex. Are you okay?”

She nodded. “I’m fine. I don’t know what to do. I guess I can’t go home tonight. There’s a shelter, but I can’t take my babies.”

“Nonsense, you’re coming home with us, you and your birds. Come on, honey.” Brenda and Stan helped her up off the ground, and she looked around. She was the last one sitting there. The firefighters were still walking around, but everyone else was gone.

Heidi stood, still in a daze. She knew she had to do one thing. She had to find the man that had saved her babies and thank him. She needed to do that now. “Do you know who brought out Bubbles and the guys? I want to talk to him.”

“Sure, honey, it was Finn. He’s right over here.” Stan took her by the arm and led her across the yard to where the firefighters had pulled off their equipment and were cooling down.

“Hey, guys, Heidi here wants to talk to y’all a minute. I’ll be over here when you’re ready to go,” Stan told her as he walked away.

She pulled her robe tighter around her and looked down at the guys sitting on the ground. They all looked familiar, but one she knew. The guy from the party. “You’re…” they both said at the same time.

“Hi, I’m Finn Wild. These are my brothers, Seth and Jamison,” he said, pointing at each of his brothers. “Are you okay?” Finn stood and walked over to her.

“Yeah, just a little shook up. Are you the one that rescued my babies?” She looked up into his deep blue eyes.

“Consider it payback for flattening you and ruining your dinner,” Finn said with a smile. He turned to his brothers. “This is the girl I was telling you about.” Both men nodded as if they knew the entire story. Heidi wondered what Finn had said about her.

“Do you have a place to stay with your birds?” Seth asked as he got to his feet also. He looked to be a couple inches taller than Finn and maybe older.

“We can reach you there then?” Jamison asked as he also stood. He had to be the middle brother age-wise, but he was taller than the other two and a little beefier. All three men were taller than her five foot three, by several inches at least.

Finn whispered in her ear, “Look at them. Watch as they worship your breasts. You have beautiful breasts, nice and full. See how they fit my hands. They were made for a man’s hands.”

Heidi leaned her head back and closed her eyes, letting the feeling of the men enjoying her body wash over her. The tingles increased, and she moved restlessly, wanting more, but not sure how to ask for it.

“Relax and let Jamison and Seth take care of you. They’ll give you what you need,” Finn said softly in her ear as he eased her down on her back. Her shirt was now pushed down around her waist. She looked down and could see the heads of Jamison and Seth as they took her nipples in their mouths and sucked. Her hips arched as her blood continued to tingle. She felt the moisture start to gather between her legs.

Finn leaned down and took her lips, slipping his tongue in when they parted in a sigh. He held her head between his hands and kissed her deeply, pushing his tongue into her mouth. While he was kissing her Seth and Jamison continued to worship her breasts, sucking on her nipples and pulling them between their teeth.

One of the men slid a hand down to rest on her mound over her skirt, not moving, just lying there. She wondered what it would feel like if it was resting on her bare skin. They continued licking and kissing her breasts, gently biting her nipples and pulling them between their teeth.

“We all want you, sweetness. Would you like that? To lay with all of us and have us worship your body and see to your needs. We’ve been looking for a woman to share. Could you be that woman?” Finn whispered in her ear. He took the lobe between his teeth and pulled, sending more tingles through her body.

Seth and Jamison slowly pulled away and helped her sit up. With a sigh, they pulled her top back up, and they each gave her a light kiss. “We don’t want to overwhelm you, but we all want you, Heidi,” Seth said as he pulled away from her.

“I know it’s soon, but would you like to go out with us another time? We’d like to take you dancing one night,” Finn said as he patted her top into place and stared into her blue eyes.

“We’ll pick you up Friday night and take you to a bar we found not far from here. You’ll love it,” Seth told her as he switched places with Finn and wrapped his arms around her.

“We’re all working the rest of the week at the firehouse so we won’t be able to see you until then, but we’d like to call and talk to you, if that’s okay,” Jamison said and took one of her hands between both of his.

“It’s getting late, and we need to get you home so you can be fresh for work tomorrow,” Finn said, standing and helping her up. Jamison reluctantly let her go and after she was standing gathered up the blanket to carry back to the truck. They all got in with Seth driving this time. Finn got in the back with her. He turned her to rest against him and held her in his arms all the way back to Brenda’s. 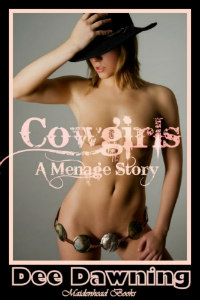