Tails in the West (MM)

With Tails in the West, habu’s series of gay male “Tails” anthologies moves to the area encompassing what is thought of as the Old West of the United States. Although the traditional American West is broader than this, the twenty-one stories in this collection are set in a north-to-south band of U.S. states stretching down from Idaho and Wyoming (with an eastern jaunt into Nebraska), down through Utah and Colorado (with an eastern jaunt into Kansas), to Nevada, Arizona, and New Mexico. The characters in these stories predominantly are cowboys, or the modern equivalent, and the themes center on male-male relationships. Although the stories are presented in alphabetical order by title, they fall into two categories: The Old West of the traditional cowboy in the late nineteenth and early twentieth centuries and the West of the modern day

A theme running through many of the stories is the concept of the male brothel, often set at a ranch or a town saloon. The reader will find both Old West and current West stories including these settings. These arise from a phenomenon of the Old West that has continued to today. There weren’t many women in the Old West, particularly on the range where cowboys worked. It was a lonely life, though, and one where fit and sexually prime men found only other men around to satisfy their natural needs. Therefore the homosexual lifestyle, although always kept below the surface, was not unknown. Male brothel ranches can be found throughout this region even today if one knows where to look for them. Habu has conjured up some to entertain you with in his stories.

Tails in the West (MM) 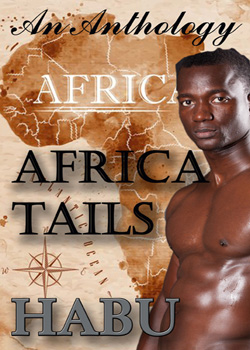 From the short story “3-Shot Jealousy”

“Comin’ or going to the cattle yards in Omaha?” Skinner asked. He liked to know who was using his male bordello. It was getting so that folks couldn’t do what they damn well pleased on the banks of the Platte anymore. Getting too civilized for him in Nebraska of late. People were starting to look around. . . .

Skinner could have shot himself. The man’s money was good and he never caused trouble when he was in here. And he was a good looker—something for the other men to look at and dream about while they were waiting for their turn upstairs. And that he took ****—which all knew as soon as he asked for Ned—rather than was looking for male pussy like nearly all the rest in here, made him good business interest while men waited. Skinner had half a notion to make an offer to him that he take up some of Ned’s slack tonight, and then he’d be getting what he wanted for nothing.

“No, no. Nothin’ to it. It’s just getting’ late and we need to push off early in the morning.”

“Catch you when you’re coming back through in a week or so?”

“That’a be good. Ned’s off Sundays and Mondays.”

“Good to know, thanks.” Jess pulled his hat down over his eyes and headed for the door. The barkeep had mentioned Ned in a pretty loud voice and it had started a buzz again in the room. Anybody talking about Ned knew that he gave ****; he didn’t take it. The mention of his name in relationship to this good-looking, nicely dressed, blond guy with a good body caused many in the room to start sniffing the air. They all were waiting longer than usual for their turn upstairs on a Friday night.

One guy, standing at the other end of the bar from where Skinner and Jess were talking, had been listening in for some time. He was taller and more muscular than Jess was. He was maybe ten years younger and several rungs down the economic scale from Jess. His drinks were being husbanded. He’d barely come in with enough money for his turn up the stairs. His clothes, a plaid shirt and jeans, with cowboy boots, were worn and a bit tight on his muscular body. This only accentuated how muscular he was, though. At closer to seven feet than six feet tall, he towered over Jess. His hands and feet were huge. The hands were calloused from hard work—probably in the fields rather than on a ranch. He was dark and swarthy, but also sultry in a sensual way.

When Skinner had looked at him and assessed him, his first thought was to wonder why he was in here at all. He didn’t look like he could spare the money, but he also looked like he didn’t need to come in here at all—that he could get poontang of whatever variety he wanted just by walking down the center of the street. Although maybe, from the bulge at his crotch, he scared some men off.

As Jess walked out of the barroom, Skinner started to move down the bar, thinking it was time to push another drink on the tall, dark stranger. But the man was tipping his hat, pushing his glass away from him, and turned to leave in Jess’ wake.

Jess was starting to unhitch his horse at the rail, when he heard the voice, a low, smooth bass.

He turned to see a tall, muscular, dark-haired man walking across the porch toward him. He shivered at the sensual look of the man—the hugeness of him. His eyes focused on the man’s crotch. It might not have done so if he hadn’t been thinking all day on the hot and dusty trail about his planned session with Ned tonight. But he was keyed up, and disappointed he wasn’t going to be getting his rocks off from Ned ****ing him.

“Yes?” he said, realizing that his voice was wavering a bit.

“You wanted Ned in there. Did I hear right?”

“So, I got tired of waitin’ too. Seems we could both get off without the wait or either of us spendin’ the money.