Talk to the Hand Model: A Guido la Vespa Romance in France (MF)

Heat Rating: Sensual
Word Count: 33,742
2 Ratings (5.0)
Contemporary
[BookStrand Older Hero Romance, HEA]
Canadian Hazel Mackenzie is serious and scholarly and contentedly, if not passionately, engaged to Nigel Bottomley, a successful English hand model. But when she meets, thanks to the pink Vespa she has borrowed from her friend Sigrid, sexy older Frenchman, Count Pierre de la Verendrye, she feels a passion stirring that she had thought was forever lost to her.
When Pierre makes a pass at her one warm summer evening, she feels her carefully mapped-out plans under direct threat. She lets him know that she is engaged and not interested, but is she being honest? Her friend Sigrid doesn't think so.
Hazel and Pierre form a friendship, trying to ignore the sexual tension between them, but the dark secrets of Hazel's fiance begin to see the light of day. Will she and Pierre have a future? It seems they just might, until it appears that Pierre has some secrets of his own.
Set in beautiful Avignon, in the south of France, this is the second in the Guido la Vespa series.
A BookStrand Mainstream Romance 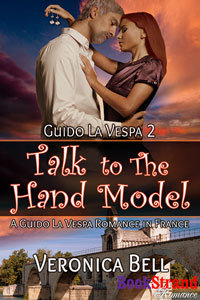 Talk to the Hand Model: A Guido la Vespa Romance in France (MF)

Passion in Perugia: A Guido la Vespa Chocolate Affair (MF)
Veronica Bell
In Shelf
$2.99
All Books In Cart
All Books In Bookshelf
Excerpt

“Keep movin’, creep,” Hazel mumbled, noticing the scruffy-looking man, perhaps in his late 40s or early 50s, approaching her as she waited outside the mechanic’s. Oh God, he’s not going away. He’s getting closer.

“I guess they are opening a bit late today,” said the man, with a thick French accent. He smiled down at Hazel. He was tall, as well as ungroomed. “You are waiting for your car, I presume?”

Oh geez. “My Vespa, but the same principle, yes.” Please leave me alone, you tall drink of un-potable water.

“Ah, from your choice of vehicle I would have guessed you were Italian, but from your accent and your appearance I guess you are English?”

“Canadian. But again, the same principle.” Bug off! And by the way, groom much, fella? How messy does your beard need to be?

“I am Pierre,” he said. “Pierre de la Verendrye. I would shake your hand, as I know you Anglo-Saxons prefer, but I am just back from a camping trip and have not had a chance to even get home and shower.”

“Yeah, you do look a little bit muddy.” As soon as the words came out of her mouth, Hazel was embarrassed. “Sorry, I mean, that’s fine. How did you get here, then? Did you just walk out of the woods?”

Pierre laughed, and Hazel thought that when he smiled he looked significantly better, even moderately appealing. “No need to apologise. I am indeed muddy. You are observant.”

“It’s sort of difficult to miss.”

“Ha! Yes, let me explain. My son dropped me off just a street over. He was eager to get home to his wife. We were holidaying together and while I was away I left my car here for some repairs. I will pick it up today, and go home in it, of course.”

“If this place ever opens!”

“Yes, I know, it is a problem in France. We don’t have the mania you have in your part of the world for following promised schedules.”

“Yes, our mania. Because I just love being reduced to a stereotype, and because there is nothing worse than having a place of business open when it says it will and, you know, be considerate of its clientele.”

“Ah,” he gestured in the direction of the mechanic’s. “Sorry to interrupt your cultural observation,” he said, raising his eyebrows at Hazel as the large front doors were yanked open, revealing several vehicles and the unmistakable, apparently universal smells of a busy garage and car repair shop. Grease, sweat, metals, and coffee were apparent, with a little odour of baguette seeping in for local flavor. “Here we are now.”

Conte? Hazel thought she must have heard wrong, because her French was very good and she knew “conte” meant “Count.” Maybe he was one of those Eurotrash aristocrats with a title and no money to even buy a razor and shaving cream.

“Please, Guillaume,” said Pierre, turning to Hazel. “You will attend to the beautiful young lady first.”

“Mais oui. Of course. I am sorry, Madame. You are waiting for which car?”

“Thank you. I am waiting for my Vespa. It’s pink.”

“Yes, it is also the only Vespa here. It is ready.”

“Great. What was wrong?”

“Nothing that we could find. It is as though it just wanted to stop for a while. Strange.”

Hazel paid her bill and manoeuvred Guido out of the shop, turning quickly to wave at her new acquaintance. “Monsieur de la Verendrye, have good day.”

“It’s Pierre, please. I shall have a better day now that I have met you.”

“Ah, Scottish origins. And I am correct that it is ‘miss,’ mademoiselle?”

“But you are not married, I hope.”

At that, there was no more stifling laughter for Hazel. She shook her head. “No, I’m not married and yes, Scottish origins, but way, way back. Hundreds of years. I’m just a Canuck girl, now.”

“Regardless, the Scottish background explains the freckles and the lovely auburn hair.”

Hazel stifled some more laughter. This is getting ridiculous. “Right.”

He took a step closer. “And did your parents choose your name based on the colour of your eyes?”

Hazel could no longer contain her laughter. “Oh please! Knock it off! No. Babies all look like they have blue eyes anyway. Hazel was my great-grandmother.”

Pierre continued, “And how long will you be visiting our city? Can I hope to see you again?”

“I’m here for a few months, at the university. But I’m pretty busy. Look, I really have to go, speaking of.”

Hazel put on her helmet, revved up Guido, and got away as fast as she could. Why hadn’t she told Count Muddy that she was engaged? Why hadn’t she just told him she was leaving in two days? It wasn’t likely he would discover her lie. What were the odds he’d run into her again? Avignon wasn’t huge, but her life revolved around her research and the university and her Skype dates with Nigel and Sigrid. And who did Count Muddy think he was, noticing her freckles and her hair?

More importantly, why was her stomach lurching, and why was she continuing to think about the muddy stranger? Hazel zoomed up the tiny street and away from the mechanic’s and Count Muddy, turning onto Rue Louis Pasteur and continuing along a few minutes until reaching the Universite d’Avignon et des Pays-de-Vaucluse. She parked Guido outside the social sciences building and smiled at him. So good to have you back. Sigrid would be so unhappy if you were unfixable, and even though it’s only been a few days that we’ve been together, I’d miss you, too.

Two for the Road (MM)
Karen Mercury
In Shelf
$4.99
Tweets by
sirenbookstrand