Being new to this non-gay-friendly workplace is not easy for Cameron until he meets Mykel. Mykel is straight, but somehow knows or senses that Cameron is gay, and takes him under his wing, so to speak. Cameron cannot help but think of the endless possibilities of love and sex with Mykel. The man is gorgeous, with his blue eyes and silver and black hair. When Mykel needs someone to share a hotel room with him for an upcoming conference, Cameron immediately offers. Four days alone with Mykel is Cameron’s dream, but he wonders if it may turn out to be more of a nightmare.

As an English teacher, Mykel was very well spoken and very precise in his speech, and in his manner. He dressed well, not a wrinkle on him, on either his clothes or his face. Cameron thought Mykel was a gay man's fantasy come to life, and he let his imagination run wild. Then one day he learned that Mykel was married and had been for quite some time, though Cameron noticed that he did not wear a wedding band. Mykel and his wife had two young boys.
Cameron had also learned that there was a very small group of gay faculty at St. Swithens, but they were very discreet and were expected to remain so. There seemed to be an unspoken “Don’t ask, don’t tell” policy here at St. Swithens.

There was one other teacher whom Cameron had gotten close to, and he asked the man one day about Mykel. “No, my friend, but sadly, our Mykel is straight as an arrow and just about as boring. Too bad, isn’t it? He is dreamy.” The man had laughed at his own unspoken admission of being gay. “Yes, I guess it is,” Cameron admitted, but didn’t totally want to come out to this man. “He is always really friendly, that's all. Guess maybe I was dreaming, too,” Cameron carelessly admitted, and then wondered after he had said this if it had been a mistake. “Our Mykel is Mr. Congeniality. You know, he's one of the few straight men at St. Swithens who I can stand, and that's saying a lot. But believe me, Cameron. Mykel is not looking to play the other side of the fence. Don't you think he would have done something about it before now if he were going to?” Cameron didn’t want to answer the man because he hated to admit that the man was probably right. Still, Mykel seemed to enjoy Cameron’s company, calling him from time to time and suggesting that they catch a movie or go see a play together. Maybe that was enough for now.

Mykel was quiet for awhile. “You know, Cameron, things are not so great right now at home. I’m surprised you haven’t heard. We could use the time apart,” he said, smiling a little. “I'll tell you more about it at the conference; that is, if you’re interested in hearing about my boring life.” “Mykel, I’m really sorry that you are having problems at home. You don't have to tell me any more than you really want to. But if you want to tell me about it when we’re at the conference, I’m all ears.” “Thanks, Cameron. I look forward to it,” Mykel said, and then left the cafeteria.

Cameron just sat there with his coffee cup and empty plate, trying to control his excitement. The prospect of sharing a hotel room with Mykel for several nights was unsettling and extremely arousing. At such close quarters, he knew he couldn’t keep his feelings concealed, and he wasn’t sure he could keep his hands off of Mykel. He wasn't sure how Mykel would react if he realized that he had been lusting after him since he had joined the faculty.

Cameron almost hated himself for what he was dying to say. “Do you have even the slightest clue how good looking you are, Mykel?” “What?” he said. “I mean, you've been a friend to me from the time I came to St. Swithens. You're one of the few decent people I know.” Philip smiled slightly. “Sure I am.” “You are, and you're absolutely gorgeous. I've been miserable knowing that I wanted you and could never have you, and here you are telling me that you're gay. I have no right to hope you might think of me as more than a friend, but that is what I am hoping, anyway.” 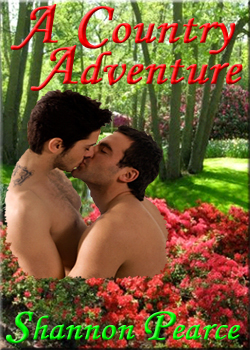