The Warriors of Love & Magic 1

Tav Cyrdath, a powerful wind adept and a brilliant general, leads the last free humans in a war against the Boa Visk, monsters who have enslaved most of humanity. But when the man who rules Illunvia refuses to surrender, Tav is forced to take the city by sword and magic. Victorious, he intends to execute the human traitor who has done so much harm by defying him. But when the defeated ruler, Duric Darmain, begs him to spare the citizens of Illunvia, Tav finds himself overcome by sudden mercy. He takes the man as a hostage instead, intending to use him in a trap against the monsters who have set this war in motion. Duric is defeated, broken...and yet Tav can't get his enemy out of his mind. But how could he ever feel this way about a man who has betrayed all Tav stands for?

Duric knows he was only a puppet ruler for the Boa Visk, yet he has done all he can to shield his people from the cruel overlords. Now he is a prisoner, fallen from power, hated and scorned as a traitor. And yet the enemy general begins to treat him with a curious respect and eventually even kindness. He dares not trust again, but this one-time enemy makes him want to yield his heart as hostage, even as he struggles to conquer the fears he can't escape...

Magic can heal wounds, but hearts must be mended with love. Both men have deep scars. Both have seen dark times. But the chance at love exists...if only they can embrace it before the Boa Visk return.

The Warriors of Love & Magic 1 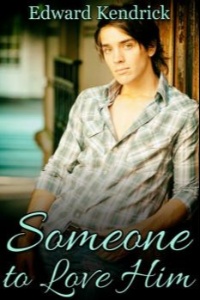 Someone to Love Him (MM)
Edward Kendrick
In Shelf
$3.99