Benjamin Henderson is recently divorced from his cheating ex-husband. After such a humiliating and heartbreaking experience, he doesn't think he's ready for a new relationship. He won't be actively searching for a new man, that's for sure. Then he has a chance encounter with Tyler West.

Tyler isn't sure Benjamin is serious about dating a single parent like him. All the men he dated before aren't interested in being burdened down by a child, and he can understand their hesitation and reluctance. Hence, he's rather wary of Benjamin at first. However, Benjamin proves himself over and over again, and Tyler thinks he may have found his happy ending after all. Then he bumps into Ted, Benjamin's ex-husband, during a trip to the grocery store of all places. When Ted starts casting doubts about Benjamin's true intention and feelings toward him, Tyler's insecurity rushes to the surface.

Will Benjamin and Tyler's relationship survive? Or is it destined for a tragic ending?

Benjamin pouted for a few seconds before leaning against the back of the couch. “Next time, you have to stop me from ordering so much food for just the two of us.”

Tyler scooted closer to Benjamin on the couch and snuggled up against his boyfriend before gesturing at the piles of Chinese food packages on the table in the living room. “Easier said than done. This isn’t the first time you’ve done this.”

Benjamin released a loud breath through his mouth. “I know, but the food is delicious, and I can’t help myself. Everything is cooked to perfection at this restaurant. It’s no wonder it has become one of our mutual favorite restaurants. Can we take a rain check on sex tonight?”

Tyler grinned at Benjamin. “Sure thing. We can just cuddle on the couch and catch up on our favorite TV shows instead.”

“That sounds great to me.”

Benjamin lay down on the couch and tugged Tyler’s back closer to his front before responding. “It’s not an everyday kind of thing, but I do get enough of things of that nature. I’ll only attend if the event happens to have a major relation to one of my closest friends or one of my business associates. I’m more of a homebody. I’m sure you’ve noticed that.”

“The only type of events I’ve almost never rejected in making an appearance for is the one that benefits a charitable organization. Even when I can’t make it to the event, I’ll be sure to donate some money to the cause.”

“I know that, but some people seem to have unrealistic demands of and views about me.”

Benjamin sighed softly. “After my divorce from Ted became public knowledge, my photos were plastered on multiple tabloids and websites. Almost all the information is fake.”

“What about Ted? Did he get his face all over the media, too?”

Benjamin shook his head. “Not as often as I did. He’s not the billionaire. I am. For some reason, that makes me a minor celebrity or something. For the first two months or so, the unwanted attention turned me into even more of a recluse than I already was at the time.”

Tyler had a sudden realization in that instant. “Is that why you’re terrified of us going public?”

“Kind of, but at the same time, I want the whole world to know about us. It’s crazy. I’m so messed up.”

Tyler smiled to himself. “You must really love me.”

“I do,” Benjamin whispered at Tyler. “Very much.”

Benjamin kissed the back of Tyler’s head and breathed in deeply. “Thank you.”

Tyler pressed himself impossibly closer to Benjamin. “I should be thanking you. You’re an incredible man, and you’ve been amazing to me and Travis. You treat us well.”

“It’s my pleasure. Regarding our upcoming first public appearance, I’ll understand if you want to back off from it. The scrutiny can be too much to handle. It may not happen all the time, but it will occur from time to time, especially after a red-carpet event.”

Tyler snorted. “I can handle it.”

Tyler pondered the issue for a few minutes before answering the question. “I want to keep him away from the spotlight as much as possible. Will he be in danger?”

It took a short moment for Benjamin to reply to the question. “He shouldn’t be. I’ll employ a bodyguard or two to keep him safe if it’s necessary. We will probably have to discuss this matter again in the future if we end up getting married to each other someday.”

“We will have to send him to a private school with tighter security protocols in place to protect him from kidnapping and other potentially dangerous things.”

Tyler’s eyes widened in shock. “What?”

Benjamin turned Tyler around to face him. “I love you, and I love Travis. He’s like a son to me now. Being my son has its perks and issues.”

Benjamin’s expression dimmed considerably. “Are you regretting being with me now?”

Tyler wrapped one arm around Benjamin’s waist before burying his face into the crook between his boyfriend’s neck and shoulder. “Nope.”

“Thank you, too, for loving me and accepting Travis.”

Benjamin embraced Tyler a little tighter. “It’s not matter of acceptance. I love you and Travis. I knew right from the beginning the two of you came as a package deal. I’m more than willing to take on the responsibility of being Travis’s second dad someday.”

It was light and subtle at first. Benjamin could feel Tyler’s hand slowly creeping up his thigh as they snuggled on the couch in the living room and watched a romantic comedy on the television. It became more obvious where things were headed after a brief period of time. Benjamin reached for Tyler’s hand and stilled its movement.

Benjamin could feel his dick lengthening and thickening at a rapid pace, but he was also a little reluctant. “So am I, always, but we don’t have to do this. I don’t want us making love for all the wrong reasons.”

Benjamin gulped as his resistance melted away. “Are you sure?”

Benjamin groaned when Tyler pressed their lips together. He detected the lingering aftertaste of their dinner, but underneath that, there was something uniquely Tyler. He was overwhelmed by the softness of Tyler’s lips, the sensation of their tongues licking against each other, and the heat of his boyfriend’s breath as they kissed with a fiery passion and panted in sync with every passing second. He could sense the warmth of Tyler’s palms as his boyfriend slipped both hands underneath his shirt and caressed him everywhere.

For the first few moments, he was content to make out with Tyler on the couch while his boyfriend was seated on top of his thighs, but as their passion mounted, he couldn’t hold back any longer. He began to strip Tyler naked, one piece of clothing at a time. He was gratified when Tyler appeared to be just as enthusiastic as he was, taking his clothes off until they were both completely bare. He spent a minute or so simply admiring his gorgeous, naked boyfriend and running his fingers all over Tyler’s exposed skin. His cock throbbed when he caught sight of the drop of precum on the slit of Tyler’s cockhead.

Tyler blushed. “Thank you. So are you.”

Benjamin whined under his breath and shifted forward to kiss Tyler once again while cupping his boyfriend’s butt cheeks underneath his palms. Then he gradually got up on his feet while lifting Tyler up with his hands. He chuckled into the kiss when he heard Tyler’s muffled laughter. He loved it when Tyler wrapped both thighs around his waist for balance. Neither of them broke the kiss as he walked them all the way into the master bedroom and then gently placed Tyler on his back onto the bed. After that, he pulled slightly away from Tyler and licked his way down his boyfriend’s neck and chest, paying special attention to both nipples. He suckled hard on those nipples until they were erect before he moved upward to get a taste of Tyler’s ears one after the other. He moaned in satisfaction when Tyler bucked up and rubbed his dick against his stomach.

Tyler shook his head. “I can’t. I want to feel your cock inside my ass right now. Please.”

Benjamin’s dick pulsed and leaked out copious amount of precum as he did his best to regain his control, but Tyler’s pleading was too much for him. He gazed into Tyler’s eyes and nodded.

Tyler smiled at Benjamin while pinching his nipples. “Okay.”

Benjamin hissed and glared playfully at Tyler. “Just for that, I’ll take my own sweet time to fuck you slow and easy.”

Tyler smirked. “You can try, but you can’t resist the prowess of my ass.”

Benjamin laughed. “Cheeky, but you’re right. I’ll do my best, though.”

Benjamin chortled and kissed Tyler for a short moment before rising up to grab the bottle of lubricant from the bedside table and slicking his cock up with the slippery liquid. Then he pressed his dick against Tyler’s hole and pushed it in one exquisitely delicious inch at a time. Tyler’s ass was tight and warm, and Benjamin felt as if he was burying his cock inside the most incredible velvet heat.

“Fuck! I wish I could fuck you forever. I don’t want to pull my dick out from your ass. Ever.”

Tyler winked at Benjamin. “Better stock up on Viagra then.”

How to Survive a Wedding (MMM)
Casper Graham
In Shelf
$4.50 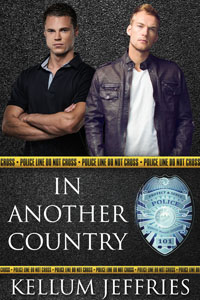 In Another Country
Kellum Jeffries
In Shelf
$2.99

A Case of Mistaken Identity (MMMM)
Casper Graham
In Shelf
$4.99
Tweets by
sirenbookstrand