Two Men in Her Tub (MFM)

Men Out of Uniform 4

When Kari Malone sees Damon and Tristan Willis after ten years, she remembers the teenage love they once shared, a love that scared her and made her run. As a schoolteacher and with a snoopy neighbor watching her every move and pushing her toward her nephew, Kari is still hesitant, but can no longer deny the love she holds for her two plumbers.

Ten years ago, Damon and Tristan had told Kari of their love for her and their desire to share her. When she denies them, they tell her that when she is ready, she will come back to them. When she finally makes her move, they accept her with open arms, though they now have a competitor for her affections.

Will she choose them? Or will she continue to let the world dictate her choices?

Two Men in Her Tub (MFM)

Men Out of Uniform 4

More From Men Out of Uniform

Kari Monroe squealed as cold water pelted her hard and fast. She jumped back to avoid the spray then screamed again when her now wet and shivering body slammed into the cold tile of the shower stall wall. She bounced off the wall, screeching once more when her feet slipped out from under her and she landed hard on her ass, once again under the shower of icy water.

Scrambling as fast as she could, she reached up and turned both the hot and cold water knobs to off. Shivering like a young tree in a high wind, she pulled back the shower curtain and flopped out of the small square stall. Once on the rag rug covering the tile floor, she slowly climbed to her feet. Before she could dry off, a heavy pounding on the front door started loud enough for her to hear all the way at the back of the house.

“Damn,” she muttered as she glanced at the open window. Since she had not heard their trucks leave, she knew exactly who was trying to break down the front door.

Wrapping one of the multicolored beach towels her grandmother used as bath towels around her, she raced through the house. Her scream had probably alerted the entire block to her dilemma.

The last thing she needed was the entire neighborhood seeing her answering the door wearing nothing but a towel. She could just imagine what the school board would have to say about that if they heard. She had yet to hear back whether or not her application had been accepted to be a full-time first grade teacher in the fall and was beginning to get nervous. Sometimes she wondered why she had decided to move back to where she had spent the happiest days of her life. Things were not working out as she had secretly hoped so far.

“Damn it, Kari, open this door before we tear it down,” a deep, masculine voice growled.

Reaching for the doorknob, she glanced down. The towel covered her from armpits to mid-thigh, but she still felt exposed as she pulled the door open, stepping back and ducking as a fist came swinging at her head.

“Oh, shit, I’m sorry, honey,” Tristan said, pulling back at the last second and dropping his hand to his side. “Are you okay?”

She was freezing, and her ass throbbed, a continuing reminder of her fall in the tub. Tempted to rub her free hand over her sore ass, she fisted her hands instead. Soothing the ache would have to wait until she was alone.

Standing shoulder to shoulder, the Willis brothers blocked the neighborhood from seeing her, but she remained tense as she studied them. They were dressed identically in bright orange Two Brothers Plumbing T-shirts, tan cargo pants, and work boots. Blond and brunette, they were a smorgasbord of yummy masculinity that she had fallen in love with during the first summer she had spent with her grandmother.

They had all been twelve at the time. The Willis boys had grown up next door to her grandmother, raised by their grandparents as well. They had included her in every adventure they had that summer and each year until the summer after they graduated from high school.

That was when things between them changed forever.

“You screamed,” Tristan said as he stepped forward, forcing her to either back up or be run over.

“And you’re naked,” Damon pointed out with a grin that had her pussy muscles clenching.

She was half tempted to yank out the golden blond ponytail that flowed to his mid-back. But he was growing it out to donate to Locks of Love in honor of a friend who had died two years earlier of cancer, or so gossipy Mrs. Angelo who lived across the street said. His sky-blue eyes twinkled at her as he passed. Big and broad with muscles on muscles everywhere, Damon most closely resembled a blond bear. He had always been more protective of the pair, making sure no one hurt either his brother or her.

“And wet,” Tristan added with a wink that had her nipples beading against the towel as she shut the door.

Just last week her all-seeing neighbor had shared that neither of the Willis boys had been out with a woman since she’d moved back. When Mrs. Angelo asked if there was something going on between her and them, Kari ignored the question and made an excuse of having to get inside to check on her dinner. It had taken her another ten minutes to escape because Mrs. Angelo then began talking about her nephew, Jack, who was coming for an extended visit after being “away” for several years.

“And cold,” Damon observed as her teeth continued chattering.

Kari took a deep breath for strength before turning to face her unexpected guests. She had loved them since she was thirteen years old and hormones had kicked in. Five years later, she had run away, frightened when they made a most unconventional proposal during that last summer together. Since her return a month earlier, they had all but ignored her unless they absolutely couldn’t. Then they treated her as if she were sixty years old and married. Until now.

“Damn, girl, you are so fucking sexy. Please tell me you have condoms.”

Wearing a cocky grin, Tristan leaned in and gave her a quick kiss. “Don’t move.”

He released her arms and straightened. She watched as he rounded the bed and pulled out the condoms from the bedside table. Fumbling with the sealed box, he ended up tearing it in half to get to the contents. Once he had the strip of plastic pouches in his fingers, he tossed them onto the mattress within easy reach. Then he turned back to her.

“Come here, sugar,” he said, holding out a hand.

Hunger for the man body-slammed her fear out of her, leaving her feeling bold and sexy. Instead of standing and walking around the bed to him, Kari rolled over and crawled across the mattress. She focused on his cock as she licked her lips in anticipation. She could not wait to taste him.

When she reached the edge of the bed next to him, she stopped. Reaching out, she wrapped her hand around the base of his cock then gently pulled on it. Tristan made a low, sexy growling sound as he stepped closer.

Leaning closer, Kari extended her tongue and dragged it slowly across the tip. Her pussy clenched at the tangy-salty taste of the fluid she tasted. She closed her lips just under the flared base of his head and swirled her tongue over the fleshy knob.

Tristan moaned as his fingers combed through her hair to massage her scalp as she slowly took him deeper and deeper into her mouth. When he hit the back of her throat, she choked before backing off an inch. Sucking gently, she traced the thick vein that ran up the underside of his cock.

She continued for a few short minutes, until Tristan jerked back with a soft popping sound.

“No, don’t go,” she protested as he stepped back out of reach.

“You’re too damn good at that, princess,” he said. He pulled her to her knees then pushed at her chest until she fell backward. He climbed on top of her and settled with his chest between her legs. “I’m going to come in your pretty, pretty pussy. But that’s for later, after I’ve tasted that sweet cream of yours.”

She read determination and hunger in his expression before he lowered his head and started slowly kissing his way across her chest. He took one nipple in his mouth and sucked it gently while rolling her other one between two fingers, sending fire shooting down the nerves that connected nipples directly to clit.

Feeling an overwhelming need to move under him, Kari bent her knees, pulled her legs up, and planted her feet on the mattress. This tilted her hips just enough that she could press her mound against his belly.

Tristan suckled her other nipple for a few seconds before continuing to lick and nip his way down the center of her body. He slowly backed down the bed until he could place a kiss at the top of her slit.

Panting, Kari’s arousal began spiraling higher and higher. Needing something to hang onto, she pulled her legs to her chest and wrapped her arms around them. It did not help, especially when Tristan slid two fingers into her pussy. She closed her eyes and tried to fight the orgasm that threatened to drown her, but needed something else to distract her as she teetered on the edge.

“Hey, you started without me,” Damon’s voice broke in, pulling her focus from Tristan’s actions between her legs.

Tristan lifted his head. “Sorry, brother, but if you had seen what she was wearing when she answered the door, you’d understand.”

Kari watched Damon strip off his clothes to expose a cock that appeared as big, if not bigger, than his brother’s did.

“How does our woman taste, Tristan?” he asked as he climbed on the bed and knelt beside her head.

“Ambrosia, brother, pure ambrosia,” Tristan said. He then took her clit between his lips and sucked hard on it.

She cried out as her orgasm crashed over her like a giant wave on the beach.

Tristan continued lapping at her, easing her back down from her peak but keeping her arousal on a high simmer. She started to tremble when he placed one last kiss at the top of her slit then pulled back and moved to kneel between her legs. 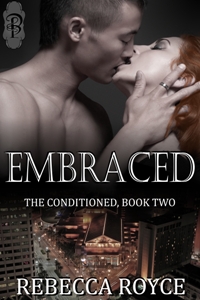 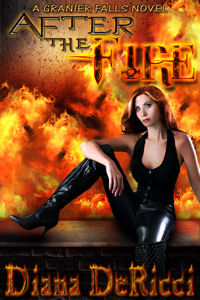