Upon touching the statue of the Unangi God of Desire, Shiemer Alonwei reflects on his life, a span of memories lacking in caring or love. With his wife and daughter dead, and the Kyleena Empire to overthrow, he is a man of purpose with no room for passion until he sees Melia. An envoy from the Empire sent to discover where his loyalties lie, she is much more than she pretends to be. The desire to possess her overwhelms him, threatens his obsession with the Empire, and his very life.

These two enemies are faced with tense attraction and must choose a new future or lose each other. In this sequel to Nimmet, Goddess of Love, Kyleena’s hold on the planets in the outer rim loosen. Enrue Alonwei is offered a chance at redemption for his past mistakes and the greatest gift of all, the opportunity to end his loneliness. 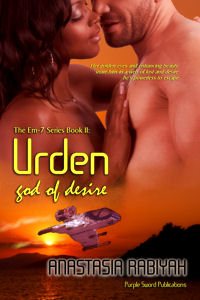 “There is no listing of a Cossia Melina Dargon. Dargon isn’t even a true surname. Did you make it up?”

Her mouth twitched. Those eyes narrowed. He knew he’d hit a nerve. “Dargon was not my birth name. I chose it. I fancied the game when I was a teen.”

“Your rank,” he repeated. “If you expect me to meet with you, I must know who you really are.”

“I have a message for you from the Kyleena Empire. That is all you need know.” She tapped at her data sharer, a smirk tightening her pert lips.

Enrue frowned, realizing he liked the shape of her face and more so that very expression. Melia seemed to be a woman who knew what she wanted. She acted sure of herself. “When can you be here?” he asked, ready to play her game now. He knew he could win this one, though he ought not to let her near him.

“Oh?” she stopped tapping at her sharer. “You’ll see me now?” She laughed, a tiny chortle in the back of her throat that lighted her odd eyes. “What has changed between us, Enrue?”

She’d done it again, called him by his first name. He leaned back in his chair, a little puzzled. “If you are not a Cossia, then you must be of some value. Perhaps, I merely want someone to ransom in order to get Kyleena’s attention.” He fingered the edge of his sash and watched her mouth twist in a strange grin. Does she look this good in person? His wandering thoughts irritated him. He clenched his teeth and tried to get his mind under control.

“You think you can hold me long enough to ransom me?” She moved closer, her face filling the screen. He stared into her eyes, put off by her amusement. She sucked in her lower lip and released it slowly, regarding him with a familiar coldness.

Enrue’s skin prickled, a sensation he hadn’t felt for what seemed like ages. Heat flared in his loins. He froze, startled by his growing arousal. Sucking in a deep breath, he glared at her. “When can I expect you to arrive?”

“Mm,” she said, taunting him by lowering her lashes and simply studying him. She didn’t answer. Melia sat back. She glanced away as if something nearby distracted her. Her inattention irritated him. It was…arrogant.

“What’s the matter, Cossia?” he taunted back. “Are my officers knocking at your door?”

She laughed once more and twisted her braid through her fingers when she returned her attention to him. “Your officers.” Hissing, she flipped the braid over her shoulder. “I walked right past them in the Alga Dockport. What a bunch of fools. Do they even know how to search properly? Did you even give them a description of me?” Her pupils became slits.

He ran a hand through his hair. Indeed, they’d found no trace of her on the ships that landed in Alga. He couldn’t fathom it. They’d tracked the ships when they entered the atmosphere. “How did you just walk past them?” he asked, finally.

Melia tapped her chin three times with her forefinger. “That’s for me to know and you never to find out.” She smiled wide this final time, reached forward and waved the same finger in front of the screen. “As to when I will arrive in your presence, the answer is…” She blew him a kiss. “When you least expect it.” The com disconnected, a white circle of light bursting in the midst of his viewscreen and gradually fading.