He’s a charismatic vampyre who can capture a woman’s attention and love.

A woman named Delia, living on the magical world of Kurbridor, is attacked by two vampires on her way home from work. She’s rescued by a tall, mysterious stranger who has followed her secretly for over a week. He’s Herres, a vampyre, and she feels an instant attraction to him, but thinks he’s only interested in taking her life-force essence. That is how vampyres feed.

Herres assures her she’s wrong, saying he is genuinely attracted to her, but will she continue to think he’s a dark vampyre who is only intent on taking her essence?

Reader Advisory: Can the heroine trust a vampyre who says she is his? Is she his prey or the love of his life?

More From World of Kurbridor

The Vampyre's Slave (MF)
Marion Webb-De Sisto
In Shelf
$1.99
All Books In Cart
All Books In Bookshelf
Excerpt

They arrived at the end of the dark walkway and were suddenly bombarded with bright lights and noisy activity. Humans, shifters, and demons spilled out of clubs and bars laughing and shouting at each other before entering other similar facilities. Several Enforcement demgels were moving within the crowds as a reminder that they were the law and would immediately punish an offender.

“You are safe now.” The hand was removed from her shoulder.

Delia turned around, but although she stood in the light, he remained in shadow. She could vaguely see him. He was very tall, wearing an ankle-length coat, which had a wide collar turned up, so that it shielded part of his face. The only feature she could see were his eyes, which shone a surprising purple color in the dark. What was he? She felt certain he wasn’t human.

Trying to ignore his strangeness, she offered, “Thank you for rescuing me. Those vampires had somehow disarmed my powers, so I was completely at their mercy.”

“You should never walk in the dark alone. Our world of Kurbridor has many dangers.” His voice sounded sharp and reprimanding.

“I usually don’t do that, but circumstances tonight forced me to walk and not take a transporter. Anyway, thanks again for saving me from an unpleasant experience.”

“I accept your gratitude, Delia, but maybe you’re due a worse experience from me. Keep in mind you now owe me.” He chuckled low and menacingly, inclined his head and moved back out of sight.

She walked through the crowds and wondered how he knew her name. Her roommate, Callie, would want to hear all the details of what happened. She was a female lycan and held a fascination for gathering pieces of information on the different species that populated this world. Callie might know what her rescuer was, but tonight she would be at the Kobard Club. While waiting on tables, she’d also be looking for the right lycan to make her inner wolf howl.

Delia’s apartment building was on the corner of Drammer Avenue and the equally busy Pertlan Walkway. She reached it, unlocked the entrance door, climbed one flight of stairs and went to her own front door. After pressing the combination of numbers on the pad at the side, the door opened and she went inside. The apartment was empty because it was too early for Callie to come home. Delia would have to wait before sharing the night’s adventure.

She hung up her coat and bag and went into the kitchen. As someone part angel, she didn’t need food every day as humans did, but she was more than ready for a drink. Delia lifted a half-empty bottle of white wine from the cold cupboard, took down a glass and poured a generous helping. The human side of her needed something to make her feel calm. Then, with glass in hand, she went into the living room, switched on the TVision set and sat down in an armchair. She used the remote to flip through the channels until she found an old movie that was from Terra. It was a comedy and might take her mind off the two vampires and the weird stranger. She sipped the wine and watched the movie until she dozed. 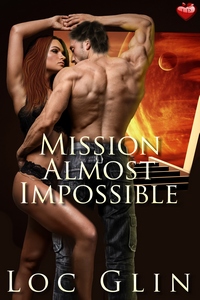 A Halloween to Remember - Book Nine of the Running in Fear Series
Trinity Blacio (RAB)
In Shelf
$6.99
Tweets by
sirenbookstrand