Tonya Ramagos is a Siren-exclusive author.

More From Uniformed and Sizzling Hot

She jerked her head toward the door, saw the fog rolling in from the space beneath it, and froze. Dear God, the house was on fire.

Panic threatened, but she forced herself to remain calm. “Freaking out isn’t going to save your ass.”

No, but keeping a clear head would. Making sure to take shallow breaths, she got out of the tub, snagged the satin robe off the back of the toilet, and slid it on. Though she knew it was probably pointless to check given the amount of smoke pouring into the bathroom, she gingerly put a hand on the doorknob.

She jerked her hand back on contact and cursed a blue streak at herself for being so stupid when a red welt began forming on her palm. She never should have touched the knob. She should’ve flatted her hand on the door to check for heat. Hadn’t she learned that somewhere back in elementary school, for crying out loud?

But that way was the only exit to the bathroom. Fuck! She was trapped.

Moving quickly, she pulled a towel from the rack, soaked it with the water in the tub, and shoved it beneath the door to help stop the smoke from pouring in. The fire was obviously in the hallway. Whether it had started there or not, she didn’t have a clue. The water in the tub would prevent her from being burned alive if the fire penetrated the door, but she would drown in the process unless someone got to her fast.

And of course, you plugged your cellphone into the outlet in the hall. Now, how in the hell are you going to call for help?

Her gaze immediately landed on the window above the tub. It was small, but so was she. Except, even if she managed to squeeze through the opening, the only way to get down would be to jump.

Hoping that wasn’t the route she would have to take, she spun on one heel and grabbed her hairdryer from the counter around the sink. The window wasn’t actually a window, but more just a plate of glass seated in a frame. It didn’t open, but it would with help. She carefully stepped back into the tub, taking the hairdryer with her. Two hard blows and the glass shattered, most of it falling outside to the ground rather than into the tub with her bare feet. If she screamed loud enough, surely one of her neighbors would hear her.

She had only a nanosecond to breathe the fresh oxygen that poured in before it was overtaken by the smoke in the bathroom that made a fast escape. A fit of coughs claimed her breath. If she couldn’t breathe, she couldn’t scream. Great, like she needed another problem right now.

She tried to pull more air into her lungs without coughing, failed, and barely heard the voice that called to her from outside.

Mindful of the shards of broken glass in the window opening, she put the hairdryer over them and used it to protect her hand as she rose on her tiptoes to see out. “Help!” It was the only word she managed before she was coughing again.

“Adam called the fire department. They’re on their way.”

How had Adam known her house was on fire before she had? She didn’t have enough breath in her lungs to ask.

As if on cue, rotating red and clear lights illuminated the night sky. She heard the whoosh of brakes as the firetrucks rolled to a stop outside her house, the array of voices as the firefighters hopped out of the trucks, and Louise informing them that Jean was trapped in the upstairs bathroom.

Minutes that seemed like hours passed before she heard more voices down blow telling someone that the flames were too thick in the house to get to her in time. They needed to extract her from the window.

“Jean,” a male voice called out to her. “I’m Captain Trey Baggett, Cherish Fire Department. We’re going to raise a ladder to that window. Do you think you can fit through it?”

Louise saved her from the struggle of breathing in more smoke to answer. “She’s small. She can fit.”

“Good. I’m sending Lieutenant Kagan up to get you.”

Jean didn’t care if he was sending the marshmallow man up to get her, as long as he didn’t melt from the heat before her feet were planted firmly on the ground. As she waited for the firefighter to appear on the outside of the window, she shot another look around the bathroom, looking for something to stand on. Of course, she couldn’t find anything. How was she going to crawl out the high window with only an inch of tub rim to aid her?

The voice claimed her attention in an instant. She knew that deep, sexy baritone, and damn if it didn’t have the same effect on her now, even when she was probably mere minutes from being burned alive, that it had on her when he’d spoken to her in the store.

“You’re…a…firefighter?” She managed to get the question out between coughs and watched him nod in response.

Jean started to ask how, but he’d already figured it out. His shoulders were too wide to fit through the opening, but his arms weren’t.

“Put your arms over your head. I’m going to lift you and pull you out.”

She didn’t mean to, but she knew she gave him an incredulous look.

“I’m Brant Kagan. Since your superhero powers seem to be on the blink, you’re going to have to trust mine.”

Somehow, she managed to laugh without coughing. “Are you…a superhero?”

“I’m about to be yours for tonight.”

Ho now! She likely would’ve taken that comment as a joke, if it hadn’t been for the spark she saw in his dark eyes. Even through the smoke and his face mask, there was no way to miss it. She hadn’t seen the least bit of attraction in his eyes when he’d visited the store, but she saw a tanker truck full of it now. It was clouded by something she couldn’t define, but it was there, and damn if it didn’t have all her girly parts zinging to life again.

She looked up at him from beneath her lashes as she took more of his cock into her mouth. He stood rigidly still in front of her, his hands balled into fists at his sides, his eyes closed, and his head tipped as far back as it could go.

When she gave his balls a gentle squeeze and took his length into her mouth until her lips met with her other hand wrapped around the base of his shaft, he shivered and laced his fingers into the back of her hair to grip the strands.

His words, forced through obviously gritted teeth, made her smile around his cock in her mouth. Several responses came to mind, but she wasn’t about to stop exploring his hardened flesh to speak them. She curiously studied his shaft with her tongue, not wanting to leave an inch untasted. To do that, she would have to move her hand and swallow the rest of his length. His cock was thick enough to have her pussy pulsing in excitement. It was long enough to have her mind wondering if she would taste it again once it was inside her. Could she take all of it into her mouth?

There’s only one way to find out.

Gearing herself up for the adventure, she followed the vein that stretched along the underside of his shaft to his cockhead, felt it pulse against her tongue. She stopped to lap up more of his salty-sweet precum and then repeated the move, this time in the opposite direction.

A giggle escaped her, taking her briefly out of the moment. She recovered quickly when her lips bumped her fingers around the base of his shaft again. Going for broke, she curled that hand, relaxed her throat, and swallowed his cock all the way down.

“Fuck, fuck, fuck!” The word started out as a whisper, but got louder with each repeat. And he kept repeating it like a mantra, as if it would help him hold onto his rapidly diminishing control.

It was control she was determined to make him lose.

Knowing now that she could take his full length, she pulled her mouth back, suppressing a shiver as it glided from her throat. She skimmed her lips to his cockhead again, but this time, she didn’t linger. She immediately sank her mouth on his length, taking it all the way in, and drawing back to repeat the move over and over again.

It took it for as long as he apparently possibly could before the hand in her hair was pulling at the strands, tugging her mouth from his cock. “No. No, no, no, no.” The word got faster as he used the hold on her hair, along with the grip he put on her shoulder, to tug her to her feet. “You’re not going to make me come that way. Not this time.”

His stunning blue eyes were darker than she’d ever seen them and swirling with torment and lust. Before she could formulate a response, she found herself on her back in the center of the bed, her legs spread wide, and his body between them.

Staring up at him, she couldn’t help but ask, “Who’s in need of medical attention now, Mr. Hot Shot Paramedic?”

He chuckled, albeit breathlessly, and brushed a kiss to her lips. “You’re wicked.”

“Hmm…” His cock was right here, the head lightly touching her sodden folds, poised to enter her. “And you’re still not inside me.”

“There’s two reasons for that. One, I’m taking a minute. I sink inside you now and it’ll be over in two-point-three seconds. Two” —sheer regret suddenly filled his handsome face– “I don’t have a condom.”

Jean chewed her bottom lip as she smiled up at him. “Well, lucky for both of us, I do.” She turned her head to the right, shooting a pointed look at the bedside table drawer. “In there.”

“The convenience store next door to Verizon. I grabbed a box along with the bottle of water I went in there for.” And admitting that had her cheeks heating hotter than the steam she had endured in the bathroom the night of the fire at her house. In an attempt to brush it off, she quickly added, “A girl should always be prepared, right?”

He grinned and kissed the tip of her nose before reaching for the nightstand drawer to pull out a condom. “A smart girl always is.”

Gnawing on her bottom lip again, she watched him as he sat back on her heels between her legs and ripped the foil-wrapped condom open with his teeth. “Do you, uh, want some help with that?”

The response came so quickly it made her laugh. “You’re not afraid of letting me get my hands on you again, are you?”

He glanced at her as he rolled the condom down the length of his shaft. “Hands, mouth, anything.” 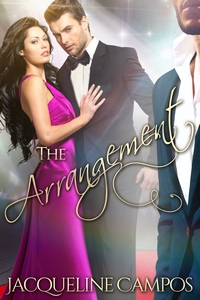