Rogue vampires threaten the shifters headquarters in Montana, hoping to upset the balance of power amongst the alternate species. Logan Carter, Head of Security, and his hot white tiger intern, Phin Ince, are charged with protecting the community. They also find the time to explore one another sexuality.

When investigative journalist Nova Mackenzie finds herself under threat from a bear, Logan and Phin shift in order to save her life. The scoop of a lifetime has fallen into Nova’s hands.

Can the guys persuade her not to reveal their secret by distracting her with their sexy games? And what connection does Nova have to the renegade vampires? Can she repay the guys by risking her life to keep them safe…

“The journey was long.” Nova reclaimed her hand, feeling overwhelmed by testosterone. “You’re tucked right out of the way here. Must get lonely.”

Carter’s lazy smile caused odd sensations to reverberate through her belly. The man was one of the world’s natural charmers, accustomed to making an impression, she sensed. Presumably his physical attributes were meant to distract her from asking awkward questions and, pathetic creatures that she was, it was working! His picture hadn’t done him justice. In the flesh, he was every woman’s fantasy, and then some. Nova wasn’t on the prowl for action, but she wasn’t averse to a little window shopping, either. Carter was the quintessentially tall, dark, and handsome stud with the added attraction of lithe coordination that made it look as though he didn’t have any bones in his joints. He was poetry in motion, and Nova was enjoying the fluidity of his verse.

She blushed when Carter fixed her with a smug look. He was making small talk, responding to her remark about their location, while she did a visual stock-take of his physical attributes. Shit! Get a grip! He nodded to the view outside his window—wide-open wilderness with forest in the distance.

“What’s not to like?” he asked. “Sometimes it’s hard to concentrate. The view gets distracting.” But he was looking at her again now. “This is Phin Ince, my intern.”

Phin showed the same supple dexterity as he levered himself from his chair, pushing highly unusual thick black and white-striped hair away from his eyes as he offered her his hand. It couldn’t be natural. A man that young didn’t have white hair. But then again, he didn’t look like the vain type who took much interest in his appearance, and certainly not the type to go in for highlights. He was pretty hot, too, oozing machismo, even though he was no match for Logan when it came to self-confidence.

“Have a seat,” Carter said, indicating an arrangement of comfortable chairs arranged around a glass table at one end of the spacious room. The same room, she figured, that had caught her attention when she parked her car. What were the chances? “Can I get you anything? Coffee? Water?”

“Thanks, but no. Your assistant already gave me coffee.”

Carter sat across from her and crossed one leg over his opposite thigh. Unlike the ladies that Nova had thus far encountered, both Carter and his intern were casually dressed in jeans and open-neck shirts. They wore those jeans low-slung and tight-fitting. Oh my! She adjured herself to stop drooling and get on with her job. Carter had turned on the charm, but there was something off, an underlying tension in the room, as though she was there under sufferance. She understood that they must be pretty pissed if they’d agreed to entertain a specialist investment journalist whose written word could enhance their reputation. In their place, she’d be damned suspicious, too.

“What brings an investigative journalist to our neck of the woods?” he asked, cutting straight to the chase, with a charming smile that didn’t quite reach his eyes.

“I go where I’m sent,” she replied with a shrug. “I’m freelance and have to eat.”

“Even so, I can’t help wondering why The Investment Times think you’re the woman for the job, no offense intended.”

“None taken.” Nova wished she’d asked for a drink now, just so that she’d have something to do with her hands. She was here under false pretenses and had about as much chance of fooling this astute guy as she of curing her mother’s illness. “Their reporter was taken sick, no one else on staff was available, and I’m a quick study. The editor told me it had taken a while to set this interview up, and he didn’t want to have to reschedule. I assume your investors aren’t experts, otherwise they wouldn’t need you. Look upon me as a would-be investor who knows little or nothing about the financial market and talk me through what you do in layman’s terms.”

She sent him an economical smile. “Thanks for the vote of confidence.”

Carter held up his hands and pushed them toward her, palms forward. “That isn’t what I meant. I have no doubt you can handle the assignment. It’s just odd, that’s all. That publication enjoys a good reputation. You can’t blame me for wondering.”

The intern’s head swiveled from side to side as Carter and Nova batted the ball back and forth.

“I have no way of knowing why I was sent.” She felt guilty as hell. The deception didn’t sit comfortably with her. “Presumably the editor doesn’t think I’m completely inept. Anyway, I don’t want to make a nuisance of myself, Mr. Carter—”

“Okay, Logan. And I’m Nova.” She went on the offensive. “You have your doubts and I have mine.”

“We have to do something to pass the time. Any suggestions?”

“Well, I…” Phin swallowed and blushed.

“Think you can get hard for me?” He squeezed Phin’s scrotum through the denim of his jeans.

“You know that I already am, Sir.”

“Yeah, I noticed when we were talking about the greatest threat posed to our species for months, your cock was almost busting your zipper.”

“You were naked, Sir, in case you hadn’t realized. You still are. It’s kinda hard to concentrate with that sort of distraction in my line of sight.”

“Find me distracting, do you?” Logan asked playfully.

Phin lowered his head, trembling from head to foot. “I can’t stop thinking about what you did to me,” he admitted.

“What about our guest?” He nodded toward the bedroom door. “Do you fantasize about doing her, too?”

Phin shook his head. “She wouldn’t want me. Not after she’s had you.” He glanced down at Logan’s now erect cock to emphasize his point.

“Oh, I wouldn’t be so sure about that. But she’s out for the count right now, so you’ll have to make do with me.” He slapped Phin’s backside. “Get naked.”

Phin grinned and stripped off in seconds flat, leaving his clothes where they fell. He then stood in front of Logan, rampant and trembling.

“Okay.” Logan glanced at his intern’s throbbing dick and grinned. “Seems like we both have a problem.” Logan picked up a plastic ruler from his desk and thwacked it against his hand. “On your knees. Lean over the arm of the couch, big guy.”

Phin’s throat worked, but his eyes gleamed with expectation rather than panic. He got himself into position and spread his legs wide, instinctively knowing that would be the best way to absorb the pain. His heavy balls hung low, and his erection pulsated when Logan lay the flat of the ruler against his backside, preparing him.

“We need to improvise, given that all the toys I’d like to use on you are in the bedroom. And the bedroom’s occupied. But still, plastic can hurt like a bitch when properly inflicted. Why do you deserve to be punished, Phin?”

“Because I got jealous and possessive, Master.”

“You did. You think my cock is your exclusive property, don’t you?”

“I’d like it to be, Sir. You have a fine, fine cock, if I might be permitted to express that opinion.”

“No opinions allowed when you submit to me.” Logan brought the ruler down hard and without warning Phin to expect it. “Bad tiger!”

Phin cried out and then hissed. His cock twitched, but he held his position, panting hard. Logan gave him five more, then threw the ruler aside. He fell to his knees behind his obedient little sub and ran his palms softly over Phin’s ass.

“Yeah, you get off on that, don’t you? And you didn’t disgrace yourself by coming. You’re learning. I’m real proud of you.”

“I like pleasing you, Master. And I like it when you discipline me even more. It gives me the guidance I need.”

Logan grabbed his own cock and ran it down Phin’s crack. “I suppose you expect a reward now.”

“Hmm.” Logan got up and rummaged in a drawer. “I forgot that I had this little baby tucked away in here. This, my friend,” he said, dangling the toy beneath Phin’s nose, “is a testicle cuff.”

Logan fixed the ring-shaped device around Phin’s scrotum, closing it around his balls so that they couldn’t slide through. He slipped the other cuff around the base of his cock and sat back on his haunches to examine his handiwork.

“It will help you overcome your little problem,” he said, leaning forward to kiss Phin’s backside. “This little toy tugs your balls down and exposes a bit more cock. Places that would normally be hidden from view. It’s supposed to improve sexual arousal. Not that you need much help in that department, but still, do you like it?”

Logan lubed a couple of fingers, rimmed Phin’s ass with them, and sank them in deep, not being especially gentle. He didn’t need to be. Phin was already pushing back, frantic for action. The cuffs made sure of that. Logan ran the side of his face down the length of Phin’s spine, marking him with his own scent. Phin responded with a rattling purr, causing Logan to extend a couple of claws and scratch at his mate’s skin. Phin growled.

Logan slipped the tip of his cock into Phin’s anus, leaving the cuffs in place. If they became uncomfortable, Phin gave no sign. He howled when Logan grabbed Phin’s hips and sank deeper.

“Don’t even think about coming. I know you’re straining against it. Just think of pleasing me.”

Logan set up a slick rhythm, changing the angle of his thrusts as Phin’s backside clutched his cock and squeezed it painfully tight.

Logan threw back his head, closed his eyes, and gave Phin what he wanted. Phin cried out, and a shower of sperm flowed in a wide arc from the end of his cock.

“Fuck!” Phin cried, throwing back his head and howling. “Sorry, Master, I just couldn’t hold it any longer.”

Logan withdrew and patted his ass. “You did great. You held on much longer than yesterday.”

Belonging to Her Pack (MFM)
Jane Jamison
In Shelf
$4.50 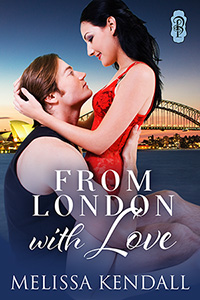 From London with Love
Melissa Kendall
In Shelf
$2.99

Cherry Hill 19: For the Love of Soldiers (LoveXtreme)
Dixie Lynn Dwyer
In Shelf
$5.50
Tweets by
sirenbookstrand