Across the Universe (MF)

For two years, Ares Gallo has been ransacking the galaxy for the woman who meant everything to him. They trained together, killed together, loved together, but now, Anicka Dekker doesn't even know who he is. All she knows every time she meets the enigmatic, scarred stranger is that a part of her trusts him. An even larger part desires him. In any and every way she can have him.

Ares wants his wife back. Despite the scars that have changed his appearance and the chronic pain that destroyed his career, he follows Anicka from planet to planet, finding her in seedy bars, stately palaces, and everywhere in between. Every time they have a few moments of pure bliss, his hope blooms that this time…things will be different. Then, STRIKE, the organization that wanted them dead, tears them apart, erasing Anicka's memories, and Ares has to start all over again.

But even if she can't remember him, he's certain she'll recognize their bond. 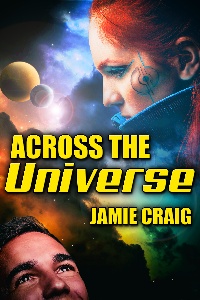 Across the Universe (MF)

When she twisted around the corner to scan the landing pad, Ares saw dark droplets trickling from her ear. “You’re bleeding.”

“Here.” Catching her jaw, he held her firm as he wiped it away. A few seconds later, fresh drops seeped down her lobe. “You didn’t cover your ears in time, Dekker.”

Anicka knocked his hand away and straightened against the wall. “I said I’m fine. So I’ll have a little headache in the morning. It’s not like I haven’t had worse.”

He didn’t agree, but the fire flashing in her eyes hypnotized him. The weakness in his knees didn’t come from his vast injuries or the strain he placed on his muscles. It came from the proximity to her he so rarely got, moments he had to snatch away before Mariel showed up with her lies to steal Anicka away again. Since the explosion that had mangled his body and stolen her memory two years earlier, he had remained faithful to Anicka, never seeking the company of another woman. Light years might separate them, and his body might ache from his loneliness, but there wasn’t another woman alive who could tempt him from his wife.

The tension of her mouth softened, and her nostrils flared. “I’ve got plugs in my pocket,” she said. “I should’ve been wearing them before I attacked. It’s my own fault if I get hurt at this point.”

Ares shook his head. “It’s Vander’s fault for forcing us to improvise.” She wasn’t moving. Through their clothes, her heat bled into him, and the image of ripping them away to get to the satin softness of her skin tightened his chest. “You should put them in, in case she’s got another destab. It’ll stop the bleeding at least.”

The corner of her mouth lifted. “I’m seriously beginning to doubt that.”

She complied with his suggestion, her hand sliding between their bodies in search of the plugs. A polite man would move out of her way and give her room. A stranger would have too. Ares was neither. He was enjoying the way her knuckles kept brushing against parts of him he’d long thought dead too much to entertain the thought of losing it.

Anicka never looked away. Her lips parted, and her sweet breath replaced the stench of the wind hurtling behind his back. Inside her pocket, her fingers stretched and twisted, each turn shifting the contact against his hip. More than once, she grazed along the side of his cock, but he had no illusions she did so without full knowledge of the effect she evoked. Anicka was a woman with healthy appetites, with more confidence in who she was and what she could do than any other female he had ever known. If she dallied, she did so deliberately. And he would let her, for as long as she might want.

“Do you have a savior complex, Gallo?” she said when her hand finally came free. “You were awfully quick to get me out of there.”

He kept a close watch on the bleeding as she slipped in the first plug. Nothing seeped around its edges. That meant the neutralizer had worked to stanch the flow. “I like to make sure I get paid.”

“Even more reason to keep you alive.”

Her lashes flickered. The darkness made it impossible to tell for certain, but the prickle on the inside of his cheek hinted she was looking at his mouth. He yearned to kiss her and test her reaction, but common sense kept him motionless. She had to be the one to make the first move. He couldn’t force it. That was the one lesson he’d learned well.

“Better us than Sheeryn,” she said. “You have ammo left?”

“Think you can improve your aim and take her out?”

“There’s nothing to improve. I got exactly what I was aiming for the first time.”

She smiled. “I never pegged you for a guy who likes to toy with your target.”

“Because I’m not. Games are for people who could accept losing as an option.”

He couldn’t tell her that he’d lost everything already, that his entire life had been turned upside down and inside out, ripped apart in mere seconds, because then she would ask questions, and he wouldn’t be able to refrain from giving her the answers she sought. There was no way to answer Anicka without revealing too much, and this was neither the time nor the place to distract her from their immediate danger.

So he leaned in and satisfied the immediate burn with a long, deep breath of her salty skin. “Losers don’t get paid,” he murmured in her ear.