The Town of Fayetteville 2

Naomi is an entrepreneur who has made a lot of money on her own despite her ex-lover trying to steal it all from her. She doesn't trust easily, but she's a sensual woman and she isn't against giving romance another try.

When she meets the Law men, Forester, Brendon, Cody, Rome and Mercury at different times and feels the same strong connection, she's intimidated by this menage idea and shies away from them.

Fate has a way of making things happen, and when a stalker tries to make an aggressive move, they are there to intervene.

One thing leads to another and soon she can't fight the power of a menage or the enticing charisma of the five brothers working together to break her down.

When her ex returns to hurt her they see red and they save her. Not only by stopping him from his assault but by destroying his criminal business and getting him off her case forever. They assumed the danger was over, and shockingly, she becomes a victim once again, and they must use their connections, their town, and all their resources to find her before it's too late.

The Town of Fayetteville 2

More From The Town of Fayetteville

“You’re pretty damn confident, aren’t you? Coming in here being all forward like this.”

He caressed her hand. “If you don’t feel the attraction then so be it, but I know you do. I don’t date, and not because I’m not the commitment type but because no one has piqued my interest to ask.”

“So I should be honored and accept this offer of getting to know you?”

“And my brothers. We come as a unit,” he said and licked his lower lip and her lips parted.

“I don’t believe I’m interested at this point in time.”

“Because I just moved here, have been running the store for a short period of time, and to be honest, you aren’t the first man to ask me out.”

“I’m not surprised, but I bet I’m the first one who asked you out where you wanted to say yes, but you’re letting too much thinking get in the way.”

She chuckled. “You sure are insistent.”

“I see something I want, I go after it. It’s a military thing.”

“What branch of the military?”

“Don’t change the subject. Say yes,” Rome said to her.

“I’m not looking to date anyone, to get to know any guys. That’s why I’ve turned down offers.”

He needed to think out of the box. This back and forth was fun and it aroused him. He liked her and her honesty.

“I’m taking a chance, purchasing these men’s sleepwear, from a lingerie boutique,” he said, looking around them and then back down into her stunning emerald green eyes. “You can take a chance and get to know us. It’s only fair, and we don’t even need to call it a date.” She tilted her head at him and crossed her arms in front of her chest.

“Dinner out is a date. Dinner out with several men into sharing a woman, dating her, a ménage, like what this sounds like, is a huge step and something I don’t think I’m interested in.”

“So you fear following your heart and the instant attraction you’re feeling for the five of us?”

“Sure, you met my other brothers. Forester, Brendon, Cody and Mercury.”

“Walking up the running path and almost getting plowed over.” Her jaw dropped.

“That was your brother?” She looked around them and then put her hand to her forehead. “Oh God. Oh, this is not happening to me.” He chuckled and placed his hand on her hip.

“That was kinda Mercury’s response as well.”

“I think I should decline.”

“Holy fuck,” Mercury said but Forester closed the distance between them and pulled her into his arms and kissed her hard on the mouth. She kissed him right back, ran her fingers through his hair and he gripped them, needing control or he would come in his fucking pants. He back stepped her to the tree, pressed her arms up and back and she moaned into his mouth as he explored her mouth and rocked his hard cock against her so she knew what she was doing to him. As he eased his hands down her arms and released her lips, he gave his orders.

“Keep those arms up against that tree.” Her eyes widened but she looked aroused as he lowered his mouth to the crook of her neck then down between the cleavage of her breasts. He suckled over the material and nipped her nipples.

“Let go with us,” Brendon said and he and Cody were on either side of her as Forester kissed her belly while his brothers cupped a breast each and suckled on her nipples through the tank top.

Forester looked up at her.

“She looks like a fucking goddess. Watch for anyone,” he said to Mercury and Rome.

“We got you covered,” Rome said and that was it. He pushed down her pants and panties and she moaned as he fingered her cunt. One, two thrusts and she came. He fell forward and lifted her leg and somehow maneuvered his mouth over her clit and pussy and began to feast on her, to taste her cream and make her rock her hips.

“Forester, oh yes, yes, more,” she said and he maneuvered a finger up into her cunt and thrust in and out of her pussy.

“Fuck that finger, like you’ll be fucking our cocks,” Brendon said and then kissed her as she gasped.

“Then me,” Mercury added and he eased back and Rome took his place. He was feeling wild, like some caveman who wanted to fuck and claim his woman right here in the wild, right against that fucking tree and mark her their possession forever.

“So fucking delicious. She’s coming hard. Pinch those nipples. I want more,” Rome said and slurped against her pussy as she rocked her hips and his brothers pinched her nipples. Rome moved and Mercury was there for his turn.

“All of us. I want to taste our woman,” Brendon said.

Cody pulled from her mouth and she cried out. Cody cupped her cheek.

“We all want to taste you. You’re letting go and feeling. It’s fucking incredible, Naomi. You look like a seductress, your body wet, rain dripping, I could fuck you right here in the wild and it would be incredible.”

“She has a super tight asshole,” Mercury said and Forester was shocked that his brother explored her there and she was rocking her hips and ass downward.

“A feast made for kings, for us,” he said and then suckled. It was insane and then Cody took Brendon’s place and Mercury moved her other arm down and then lowered her tank and bra and began to suckle on that breast. She cried out another release and then panted as they fixed her top, her pants and she leaned against the tree and caught her breath.

“I think you should charge for these tours. Women would be lining up,” she said and Forester knew she was trying to put up the walls.

Brendon pulled her into his arms and cupped her cheek and stared down into her face.

“No other woman but you, Naomi. This is a first and a last except with you and you only. Got it?” he asked firmly. 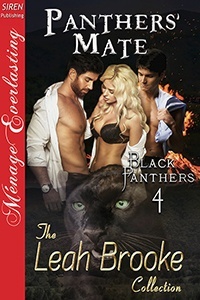