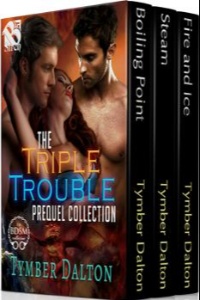 Finally the vision started to fade and Elain released Ryan’s arm before he could pull away.

They silently stared at each other.

She leaned in close, right in his face. “Doesn’t really matter, does it, Amigo?”

She heard his sharp intake of breath, but he didn’t reply.

“I feel it,” she said. “Somethingdifferent. Gigi didn’t just throw her powers into me like Callie did to Mai. Something else happened. So what deal did you make with that old bitch to send her off-Earth, hmm?”

They both knew who she was referring to, and it wasn’t any of the women Elain had seen in her visions, either.

That’s when Elain finally noticed and really saw the garnet amulet around Ryan’s neck, almost concealed by his shirt collar. She’d seen it other times before tonight but had never paid it any attention before. It’d been what he’d reached for when he’d cast the barrier.

She’d seen someone else with an amulet, too, now that she thought about it.

She grabbed it, closing her fist around the stone, still staring into his eyes.

Now it was her turn to gasp. “The old Triad is really gone.”

He slowly nodded. “You knew this. You were told this.”

Stunned, she opened her fingers and stared at the stone lying against her palm. She understood not exactly what it was, but the fact that Ryan—or someone from The Firm—had given her one made a lot of sense now, especially in light of the earlier revelation Baba Yaga had made to her.

Elain liked that he was sharp enough and skilled enough to grok what the hell she was asking without her needing to go into detailed backstory, or breaking out hand-puppets.

“She didn’t tell me exactly at first what she was doing. I saw no harm in it. I guessed later, when I saw what had happened in Maine. There is still a Triad. That is the important thing. It has passed on to you three.”

“She willingly gave up most of her powers,” Elain whispered.

Crap. That meant she couldn’t think of her totally as Baba Bitchy any longer.

“But she can still—”

“With the little bit of assistance I have given her, yes. It falls under certain…parameters. She is rendering assistance to me and mine in a very delicate matter. In return, I have made certain…allowances. I am stretching the boundaries of my authority, but since it actually crosses into an area of my concern, it’s allowed and will not be questioned.”

Elain finally released the amulet and stared at him. “She didn’t just join BettLynn and the Beasts. She knew who BettLynn’s father was, and about his cockatrice genes, however diluted. She occluded BettLynn with her powers, the way…”

Elain didn’t want to finish that statement aloud in case Baba Yaga was listening in somehow. “So no one will ever know about BettLynn’s cockatrice side. Because the genes would have passed through to her because of Paul Abernathy.”

“She mingled BettLynn’s aura with the Beasts’ auras. She didn’t just reunite old loves and souls. She set it up so absolutely no one can tell BettLynn has cockatrice in her. BettLynn’s cockatrice genes have been totally occluded.”

“BettLynn doesn’t have cockatrice in her. Not any longer.”

“She is very old and is—was—very powerful. I don’t know the intricacies of it all. She talked with me and we struck a bargain. In exchange for her assistance, I have taken her into the fold, as it were, with The Firm.”

Another realization hit Elain. “Baba Yaga couldn’t not know about Aliah and her baby, then, could she? She must have set it up for Gigi to…do what she did, right? Baba Yaga is the one who set everything up to work out like this.”

He shrugged. “That I don’t know. If she did, she didn’t tell me. She does appear to be one to make highly detailed, long-ranged plans. I’m not trying to evade the question, either. I truly do not know the answer. I would not, however, risk revealing the truth to her about your son without you having answered that question first. Just in case.”

“Son of a bitch.” Elain needed a moment, to breathe, to absorb it all. “Ryan, quit dicking around. What, exactly, are we dealing with?”

His expression hardened. “Something very old, very nasty, and apparently with an extremely large grudge against yours truly. And, unfortunately, it impacts all of you directly.”

He sighed. “I don’t know all the whys, or all the hows yet. This is why I wish to have a private sit-down with you alone so we can discuss all of this and bounce things off each other. I truly adore Lina, but she is far too emotional and unreliable still to be entrusted with some knowledge. Even you will agree to that.”

Heat filled Elain’s cheeks, but she nodded. Yeah, knowledge like the fact that Marston Hill was alive and well and living in fricking Bolivia with Ortega Montalvo, head of the jaguars, and a dear Lyall friend and wolf Clan ally. Lina would burn down fricking Bolivia and everyone in it without a second thought to kill Marston Hill, if she could get away with it.

“But what matters,” Ryan continued, “is who the person holding the grudge is in relation to all of you, and that is what is important. Because he is alive, and well, and out for blood. And because I believe he is, historically, the ultimate sire of the cockatrice race.”

With their own house now, just across the front yard from the Lyalls, they had all the privacy they wanted, when they wanted it. Unfortunately, somewhere in the past couple of weeks, they’d all gotten busy with real-life and the romantic part had kind of slipped by the wayside.

Soft snoring on either side of her normally would render those thoughts moot. While she knew she could take care of it herself, she didn’t really want to.

Especially when she had not one, but two handsome guys at her disposal. Micah, being an Alpha wolf, usually didn’t let this slide for very long, but work had been taxing.

Jim was a human, but even he kept up a fairly steady pace at work and in bed.

After another hour of trying to go to sleep and realizing it just wasn’t going to happen without something else happening first, Mai decided it was time for her coyote shifter self to take a little initiative despite it being nearly two o’clock in the morning.

She sat up, dove under the covers, and rooted around until she found Micah’s cock. She sucked it between her lips, immediately earning her a soft, sleepy moan.

Micah had been lying on his side, spooned against her back. Now he rolled onto his back and as his cock started inflating in Mai’s mouth, she suppressed the urge to giggle. Fingers started stroking the top of her head, threading in her hair, the pressure increasing as he woke up and started rocking his hips in time with her ministrations.

On the other side of them, Jim sleepily rolled over. “Huh?”

She reached out and found his cock. Wrapping her fingers around it, she gave him a slow, gentle squeeze that immediately produced results in the way of a moan and his shaft stiffening in her hand.

There we go. That’s better.

Yes, she’d pay the penalty for this later in the form of an early morning alarm going off and rousting them out of sleep—totes worth it.

“Mmm.” Micah’s husky, sleepy tone drilled right through her soul to her clit and gave it a friendly flick. “That’s sooo good, baby.”

Jim rolled toward her, throwing the sheet down and off of them. He slid a hand under her and found a nipple, rolling it between his fingers and drawing a moan from her.

“Ohh, yeah,” Micah said. His hands now clamped down on her head and he slowed her motions, taking over, taking his time. His cock felt like hot, silken steel against her tongue as he thrust between her lips. “Someone needs a good fucking,” he softly said.

“I’ll get the lube.” Jim untangled himself from Mai and left the bed, returning a moment later with a towel, condom, and the tube of lube.

Lately, whenever they tag-teamed her like this, she ended up with a vision of some sort.

Micah pulled her off his cock and on top of him, his hands dropping to her hips. Thrusting up, he buried his cock inside her, holding still and pulling her back down for a scorching kiss.

Mai let out a soft whimper of need. Her men knew exactly how to wind her up. Admittedly, she was already mostly wound by the time she woke them up. But by tag-teaming her, with one of them in her pussy and one of them in her ass at the same time, it was a guaranteed way to send her into orbit.

Mai felt the mattress dip behind her as Jim returned and quickly started working lube into her ass. Her clit throbbed as it rubbed against Micah’s body. Jim’s fingers slowly scissored inside her, loosening her and getting her ready to take his cock. It didn’t take long before she heard him rip open the condom pouch, roll it on, and then he pressed the engorged head of his cock against her rim.

As she felt the wonderfully familiar sensation of Jim’s cock stretching and filling her, pressing Micah’s cock against her g-spot, she knew they wouldn’t have any trouble getting her to come like this. Sometimes, it felt like their mating was magick, and maybe it was. This was one of the many reasons, their perfection in bed, their bodies fitting together as if made for each other.

Once she felt Jim’s thighs pressed against hers, he pulled her body up against his chest and reached around her to find her clit. “Let’s hear you moan, baby.”