It was lucky he found her so close to the dance hall, otherwise she’d come around soon and find herself in the arms of a naked man. He had a feeling she might not like that.

He opened the back door and carried her to the office behind the bar area. Without stopping, he lowered her into the big sofa against the wall in front of the desk. He placed her keys on the desk. She didn’t look comfortable. He adjusted her body and the position of her head to rest against the back of the sofa so she wouldn’t fall over on one side, and turned toward the hallway to find his clothes in their private bathroom.

After quickly dressing, he crossed to her in two long strides. She began to regain consciousness, moaning and moving her head. He squatted down before her. “Are you okay?”

She opened her eyes and blinked, staring at him.

He smiled at her. “Found you outside by the side of the road. Are you all right? Any aches or pains?”

She sat up and brushed that glorious mane of hair away from her face. “Oh, my. I think I’m okay. There were animals fighting all around me.” She looked at her arms and then her shapely, tanned legs below her white shorts. “It looks like they left me alone.” A slow smile tilted the corners of her lips upward. “Where am I?”

Ignoring the fact that her smile made him feel all warm inside, he said, “You’re in the town of Heat Springs, Texas. This is the back office of the bar and dance hall my friend, Rex Brandon, and I own. I’m Austin Blue.”

She stared at him a moment, her eyes wide. “Glad to meet you.” She blinked and held out her hand to shake his. “I’m Cheryl McQueen. I ran out of gas. Thanks so much for finding me.”

“Cheryl, please,” she said. “I don’t usually pass out like that.”

“When was the last time you had anything to eat?” Austin figured she needed some food.

“Yesterday.” She sounded reluctant to admit that.

“Yesterday! Stay right there. I’ll get you something to eat, and a drink. Soda okay?”

“Sounds great,” she said with more energy, looking a little less like a deer in the headlights.

“Be back in a sec.” He left the office and headed for the bar where he found Rex. He was cleaning up and putting glasses up on the shelves.

“I found a young woman while on my run just now.”

“What happened to her?” Rex’s eyes narrowed in concern.

“She landed almost in the middle of a fight among those damn shifters who moved into this area a while back. I chased them off and she’s all right.”

“Lucky you were nearby and she’s safe.”

“She needs food, and her car is out of gas. I imagine she needs a place to stay tonight. Our place be okay with you?”

“Sure. Here, take her this plate of nachos and cheese to start with. I’ll put together something more substantial and bring it. Where is she?”

“I took her to the office. I’ll stay there with her and see what more I can find out about her circumstances.

“We’ve caught you fair and square,” Austin said behind her.

She chuckled at them. “That was a race, not tag,” she protested again.

“We like tag better,” Austin said, as Rex grinned wickedly at her.

“So, now that you’ve caught me, what do you plan to do with me?”

“Hmm, I can think of all kinds of things,” Austin said, his warm breath teasing her beneath one ear.

Shivers coursed through her. Playing with them a bit in the water might be nice.

Rex’s fingers squeezed her waist gently. The pressure he created aroused her. The flesh between her thighs swelled and heated. She inhaled a deep breath and then another. “The penalty for being caught,” he said, “must be paid in full, before we let you go.”

“A proper kiss,” Austin said behind her, his breath sending more shivers through her.

Kiss them both? She’d already done that this afternoon. “I kissed you both earlier today.”

“But that was a thank you kiss, not a penalty kiss,” Rex said.

“What’s a penalty kiss?” Why did she feel so breathless? She could feel Austin shifting, moving closer to her. He pressed his hips against the back of hers and she felt the huge, hard bulge beneath his jean cut-offs. Good grief. Austin was fully aroused.

“This is the penalty kiss,” Rex whispered. He moved in so close that her thighs were spread wide to allow room for his hips. She watched his face as his eyelids lowered and he covered her mouth with his. She closed her eyes. His lips were firm and warm, and he moved them slowly over hers until she parted her lips in anticipation and he delved his tongue between. She opened her mouth and he kissed her deeply. She moaned at the heated pleasure. He pulled her closer to him and she felt the hard bulge of his rock-hard penis press against her sensitive, swollen flesh. He continued to kiss her deeply and she slowly inhaled another breath, fighting to retain her good sense.

Rex never stopped his deep kiss, but stroked every surface inside her mouth with his tongue. She stroked him back, tangling her tongue with his, and heard a deep growl from him rise from the depths of his chest. He held her hips tighter.

Austin stroked his long talented fingers deep through her labia. “Love your sweet shaved pussy, babe.” He found her clit and circled it.

She moaned and shivered as her back and hips curved upward, pressing harder against Rex’s hard ridge. Rex ravaged her mouth. She was caught, overwhelmed between the two of them. She could do nothing but feel. Austin’s long fingers stroked the length of her folds and one thick finger pushed inside her passage. She whimpered as sensation became intense and need tightened her muscles. Austin stroked deep inside her and circled and pinched her clit. Pressure built and built. She couldn’t suppress her whimper of need and Austin squeezed her earlobe with his teeth while Rex slid one hand up her side and over her breast to her nipple. Rex squeezed her nipple hard. Heat plunged through her body and she climaxed. They never let go of her but held her tightly as the orgasm rocked her body over and over, the contractions making her hips buck, her muscles pulsing around Austin’s fingers.

Finally, the contractions eased until the pulses became softer. She groaned, and Rex withdrew his talented tongue from her mouth, placing soft kisses over her lips and face. She panted with the extreme pleasure. Austin slowly eased his finger from her swollen, sensitized passage, and she moaned at the exquisite sensations as he removed his fingers from her.

She heard their deep growls and knew they had enjoyed it as much as she had. Well, almost as much. She could tell from the bulges she still felt against her hips, front and back, that they hadn’t climaxed. Maybe she could take care of that for them. “I’ve never done this with two guys before.” She reached down with both hands, one in front and one behind her and cupped them both as they held her up in the water. Their loud groans were satisfying to her as she squeezed and rubbed and stroked them. She knew when they were close since they both growled deep in their chests, the sound rising in volume until both of them gave a shout. She could feel their climaxes beneath her hands. She continued to stroke them until they were obviously finished.

“Was that penalty satisfactory for you?” she asked them.

“That was the best penalty kiss I’ve ever experienced,” Austin said behind her.

“I’ll take that sweet kiss from you anytime you feel like it, hon,” Rex said, sounding a bit breathless.

Although she wasn’t about to admit it to them, she felt exactly the same. 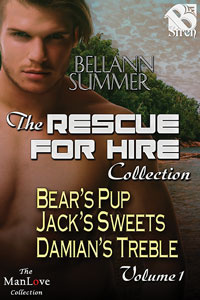