Heat Rating: Sextreme
Word Count: 40,933
3 Ratings (4.0)
Menage a Trois/Quatre Paranormal Shape-shifter Vampires/Werewolves
[Ménage Amour: Erotic Paranormal Ménage a Trois Romance, M/F/M, HEA]
Marcy Ferguson needs a new job, one that will help her achieve her goal of building a community for people like her mom who need help, but a gang of mean yahoos isn't helping. Luckily she knocks on the door of the right store and a couple of nice guys rescue her.
For Doug and Troy, when the dazed, lost-looking young woman comes to the door of their store, Heat Springs Antiques, in the rain, looking for a job, they feel a strong need to help her. The truck full of nasty locals that rumbles by convinces the two successful business owners that their fellow Alpha Protectors are needed as well, and they invite Marcy to stay at their expansive home for her own protection. She accepts, unaware that her heart will now be in danger from their generosity, and she wonders how these two obviously wealthy guys can be interested in her, a young woman who has nothing, not even a place to call home, only a big dream to build homes for those in need.
Troy and Doug fear she won't want anything to do with them when she finds out about their shameful past, and the reality of what they are now and forever. When Wra, leader of the outlaw shape-shifters goes after Marcy to exact his revenge on Troy and Doug, they must rescue her before it's too late.
A Siren Erotic Romance

“Please, could I come in? I…” she began, her voice raised to be heard above the noise outside.

Troy and Doug reached out at the same time and hauled her inside. Soaked, she dripped rain water onto the wood-planked floor. Troy felt her shivers beneath his palm. “You all right?”

“Stay here.” He strode outside with Doug and shut the door behind him with her safely inside the store. In spite of the storm he heard the loud obscenities yelled by the bastards in the truck. Both he and Doug took quick strides toward the drunken idiots. Troy expected the potent danger he and Doug threatened would send the fools on their way.

The driver floored the gas pedal. The truck sped away, tires screaming on the wet pavement. “Damn drunks.” Troy watched just as Doug did beside him until it left town. “Did you recognize any of them?” Troy asked him.

“They looked like some of the rogue shape-shifters we’ve run into all our lives,” Doug said, shaking his head.

“If they know what’s good for them, they’ll quit harassing women to get their kicks,” Troy said. “This looks like a job for us and the Alpha Protectors.”

“If those guys don’t cut it out right now, they’ll be sorry,” Doug agreed.

They spun on their heels and re-entered their store with quick strides. The lovely young woman stared at them, surprise and the urge to run evident in her wide blue eyes. She raised her hands and crossed her arms over her ample breasts, but not soon enough to keep Troy from noticing the outline of her firm tits jutting against the inside of her dripping-wet clothing. He glanced down the length of her and took in every sweet curve and valley beneath that clinging fabric. His cock rose hard against his jeans. Damn, she looked good enough to eat.

“I’m sorry, but I’m getting your floor wet.” She shook her head as she looked down.

Drops of rain flew from locks of her long red hair and dampened Troy’s shirt across his chest. His body shook from the sensation of those cool splashes, reacting exactly like the wolf in him.

“I’m so sorry,” she said, worry evident in her tone as she placed her palm over his dampened shirt. Her warmth heated his chest.

Troy gathered his addled wits. “No problem.” He felt like he’d been slammed by an invisible bull and couldn’t think. “Let’s get you dry. We’ve got some towels in the back.”

She jerked her hand away and stepped back.

Troy noticed her glance at the leaflet on the table. It mentioned the store expecting a new shipment of antiques and being closed on Mondays.

“I’m sorry to impose on you.” She looked up at him with those big, beautiful eyes. “I’ve been looking for a job and going door to door here in Heat Springs today. The storm caught me by surprise, and those idiots in the pickup started following me. They were too close for comfort just now, and there was no one else out on the street. I saw you moving furniture and didn’t even think to check if you were open for business before I knocked.”

“No problem.” Troy couldn’t help smiling at her. “We’re happy to help.” The sound of her voice, urgent and yet smooth as honey, flowed through his body like a blaze of hot sex.

Doug hurried back, his arms filled with a clean stack of the soft towels they kept for their own use at the store. “Here you go.”

“Thanks, but I should get going.” She shook her head. “Looks like those guys have moved on.”

“We insist,” Doug urged her. “You can use the bathroom at the end of the hall to dry off.” He nodded in that direction. “No sense getting chilled.”

Sounded like Doug was interested in her. Troy had no plans to let her leave now either. He wanted to know everything about her. Everything. His cock reacted again with intense need. “I’m Troy Snyder and my business partner here is Doug Hensley.”

She reached out and shook hands with both of them. “I’m glad to meet you. I’m Marcella Ferguson, Marcy for short.”

“Great to meet you,” he and Doug answered at the same time.

“You’d best go ahead and dry off,” Troy urged her, his voice gone dry and rough in his aroused condition. “The rain’ll quit soon. We happen to need someone to help us here at our store. If you’re interested, we’d like to talk to you about taking the position we have open.” Troy glanced at Doug who nodded in agreement.

They both looked back at the gorgeous female. Troy smiled at her in question, hoping to win her over.

“Oh. Yes, I’d like to talk to you about your offer.” She glanced nervously toward the end of the hall. “I’ll just hurry and dry off so I’m not dripping rain water on everything.” Her eyes sparkled with what looked like a hint of hope.

Troy grinned at her. “Take all the time you need.”

She headed down the hall with energetic steps. Troy looked at Doug to judge his response.

Doug beamed with interest. She stepped into the bathroom and closed the door behind her. “She’s one hot babe,” Doug said, his voice low. “And there’s something intriguing about her.”

“I feel it too,” Troy said, his voice soft as he watched the door to their washroom. ”There’s no other way to handle this than to share her if she’s interested.”

Troy met Doug’s gaze. “All we have to do is convince her.”

She raised her arms. Doug slid her top upward with deft ease and left it covering her head as Troy’s hands slipped upward along her sides until he reached her breasts. His thumbs grazed her sensitive nipples and she gasped at the intense pleasure. She felt Doug’s cock rise against her butt cheeks.

Her face was covered by her shirt and effectively blindfolded her so that their touches were all she sensed. She pulled her arms from her shirt and reached for Troy’s arms for support. Her knees felt wobbly. Doug eased her shirt upward over her head and finally she could see again. Troy smiled at her and cupped her breasts in his big hands. He played with her nipples and she closed her eyes to savor the sensations, the sensitive flesh along her slit swelling with need.

“That’s the way,” Troy said his voice a soft growl.

She opened her eyes and took in the expanse of his impressive chest as he took a deep breath. She wanted to feel the smooth texture of that bronzed chest with the tip of her tongue.

Doug drew her attention as he curved his hands over her hips and held her still. He moved snuggly against her back. She froze as his cock and hips pressed against her butt cheeks. It felt tantalizing and made the flesh between her thighs ache with need all the way from front to back with her increased sexual arousal.

Troy lowered his head and his mouth closed over one taut nipple as he cupped her breast. “Oh, god.” She moaned from the sweet sensation. “That feels incredible.”

He slid his hand between her thighs and, trusting him, she spread her legs to make room him. His fingers parted her labia and one finger slid to her hole and circled the wet, sensitive flesh. He spread the fluid from her opening up and down her folds and then his finger slid slowly deep into her vagina. “Ah!” She gasped as her hips bucked against him.

“Are you on the pill?” Troy asked, his voice ragged and sounding concerned.

“No, I’m not.” Her voice shook a little with her sexual arousal and tension.

Troy removed his hands from her. “We can take care of that.” He took a small packet from a tile shelf in the shower and removed the condom from it.

Doug held her against his aroused body as she watched Troy roll the condom over the swollen head of his huge engorged cock and down the hard shaft. Troy grasped her shoulders to support her when Doug released her.

She heard the sounds of Doug opening a packet and sliding the condom over his cock. When he finished he slid his arms around her waist.

She did as he said and watched Troy as he squatted down in front of her. “I think you’ll like this, hon,” Troy said.

Oh, my God, what was he going to do? She didn’t have to wait more than a moment before he cupped her butt cheeks and pulled her hips forward. Lowering his head he nuzzled the swollen flesh between her thighs, and delved between her sensitive labia with his hot, wet tongue.

She gasped at the intense surge of pleasure. He stroked her folds with his delving tongue. She leaned her head back against Doug and heard his soft growl of pleasure.

Troy slipped a finger into her vagina and stroked in and out. “You’re so wet, hon. I want to taste you.” He removed his finger and, parting her flesh with his warm fingers, delved deep with his tongue, tantalizing her sensitive opening with that tormenting tongue.

As he took his teasing mouth away, his long finger returned to her opening and delved deep, in and out. She whimpered and shivered with sexual need. A cry rose from her throat higher and higher with his every stroke deeper inside her passage. He touched a sensitive place inside her and her hips bucked as she cried out. He didn’t stop but continued to torment that sweet spot. 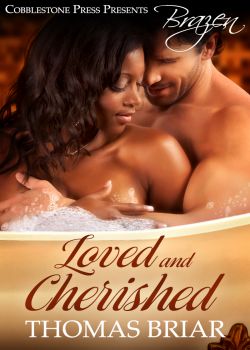 Out with a Bang (MF)
Sarah Marsh
In Shelf
$2.99
Tweets by
sirenbookstrand