Heat Rating: Scorching
Word Count: 30,737
63 Ratings (4.5)
Paranormal Shape-shifter Vampires/Werewolves Alternative (M/M, Gay)
In Bookshelf
In Cart
In Wish List
Available formats
PDF
HTML
ePub
Mobi
Cover Art by Emma Nicole
Reviews
Great story. What do you do when, while picking up a friend, you get arrested or threatened with it?..you end up going into Witness Protection and meeting your mate! So much going on in this story but it all flows together. Couldn't put it down once I started.
Red
Read more...

More From Brac Pack Next Gen

Glancing at the bar, Taylor didn’t see Paden anywhere. From what he’d been told, Paden owned the place. The thought that this was a bad idea only intensified as he gazed at more and more customers. He shouldn’t be in a place like this. If he didn’t get out of there soon, his foot would end up on someone’s keychain.

“Aw, come on,” the stranger said. Taylor could smell demon all over the man as the stranger leaned in closer, the side of his mouth curling into a devilish grin. “Don’t you like to have fun?” He began to back Taylor into the wall. Not only was the guy exceedingly tall, but massively built and downright gorgeous. But Taylor hadn’t come here for sex and he definitely hadn’t come here to be boxed in by a demon.

Taylor’s gaze shot from left to right, trying to find a way out of this. A few people glanced their way but then went back to whatever they were doing.

The man laughed as if Taylor had been kidding. He hadn’t. His heart was thumping so loudly that the blood was rushing rapidly through his ears. Taylor wasn’t sure if he was relieved or even more frightened when he saw Nevada step behind the guy.

The man was just as gorgeous as Taylor remembered, and just as intimidating. The expression in the wolf’s eyes was dark and deadly as he glared at the demon’s back. Taylor could still hear the noise of the club all around him, but it was as if someone had muted the sounds, making it sound like muffled background noise instead.

The room seemed to shrink, and all Taylor could focus on was his mate. Nevada had a low beard around his jaw, penetrating eyes, and an aura that said he wasn’t in the mood for this bullshit.

“He said no.” Nevada’s voice was low, menacing. There was a touch of growl to it that sent Taylor’s pulse racing even higher.

The stranger backed up, holding his hands up in front of him. “My bad.”

What did that even mean? Taylor had never understood that phrase. “T-thanks,” he said to the wolf shifter.

“Don’t thank me just yet.” Nevada pulled Taylor from the wall he’d been cornered against and down a long hallway.

Taylor wasn’t sure where Nevada was taking him. He wasn’t even sure he wanted to go. This place was not for a bunny. It wasn’t for any docile creature. Why a fairy owned it was beyond him. The town was mostly comprised of prey, but from what he could see in this club, predators liked to prowl around this place.

He didn’t want to go deeper into this seedy place. Taylor became angry, ready to rip his hand from Nevada’s clutches. “Please, let me go.”

Nevada opened the door to one of the rooms in the back and guided Taylor in before closing the door behind him. When he turned, Nevada’s brown eyes had grown darker, and Taylor could see the tips of the man’s canines.

“What are you doing here?” His voice was still hostile.

Taylor was trapped in this room with nowhere to go. He had to play nice if he ever wanted to get out of there alive. That seemed to be a reoccurring theme in his life. He thought about the way Kaluza had been itching to beat the shit out of him. Taylor thought about Marek’s five-second proposal to rat on his uncle. He even thought about the detective who had come by the shop earlier that day.

Taylor was sick and tired of being bullied around, but what could he do about it? He hadn’t told Kent and Morrison about the detective. He’d been too afraid that Kent and Morrison would forbid him from leaving his apartment, and Taylor wasn’t about to become a prisoner in his own home. He’d find a way to deal with the phony detective on his own.

“I came to talk to Paden about my car.” Taylor’s voice squeaked a bit.

Nevada lowered his head and leaned into the door, taking deep and slow breaths. It looked as if he was fighting something. What it was, Taylor wasn’t sure. “Are you okay?”

Taylor ran his hands down the front of his pants. He was sweating like crazy. All he wanted to do was get out of there.

“Just…” Nevada took a deep breath. “Just give me a minute.” Taylor could see the man’s jaw flexing before he shook his head. “You smell so damn good.”

Normally, that would have been a compliment, but Taylor didn’t take it as one. Not when he was prey and Nevada was the predator. That only meant that Taylor might end up as Nevada’s dinner. He swallowed hard, wishing he had called instead. One of these days, he was going to learn not to be so naïve.

Brown eyes slid toward him, and Taylor gasped when he saw just how deep in color they were. Nevada was starting to look more and more like a wolf and less and less like a human. His canines had grown, and fur started to sprout over his body.

Taylor backed up until his butt hit a table. He had nowhere to go. “Are you planning on attacking me?”

“Yes.” The word came out in a chilling growl.

Propping his arms on either side of Taylor’s head, Nevada brushed his fingers over Taylor’s hair. “Tell me you’re not leading a double life. Tell me I don’t have to worry about you.”

The desperation in Nevada’s eyes hit Taylor soul deep, like a sledgehammer slamming into his gut. Instead of lying to his mate, Taylor asked, “What happened that you feel as if you can’t trust anyone?”

Nevada closed his eyes and shook his head. “Never mind.”

Taylor didn’t argue. If he pushed the wolf, the guy just might make him promise something he couldn’t. Taylor still didn’t know Nevada that well—even though he was ready to let the guy mate him for life—and was too terrified that if he told his mate everything, somehow Marek would find out and Taylor would be Bubba’s bitch in some prison cell before he could blink his eyes.

No, he had to continue with the lie that he was Taylor Rogers, forgetting the name King for now.

Taylor took a deep breath and let it out before tracing the tips of his fingers along Nevada’s upper arms. “Are you going to get undressed or leave me lying here, begging you to fuck me?”

Nevada’s eyes became liquid pools of darkness, of heat and desire, as he pulled back and then stood over Taylor, undressing in a way that made Taylor think the man was doing a striptease for his entertainment, his pleasure. Nevada’s hands moved slowly over his shirt, skimmed down his chest until he reached the hem, and then pulled it over his head, tossing the fabric to the floor.

Next were his boots. Can’t take the jeans off if the boots were still on, and Taylor drooled as he watched Nevada’s muscles bunch and flex as he bent over and removed them. Taylor never considered a back sexy, but Nevada’s was pure perfection.

“Why do I feel like you should throw money at me?” Nevada winked at him, and Taylor felt a blush work over his body.

“Sorry, I’m broke, and I think coins would hurt if I flung them at you.” He’d never had anyone undress like this for him and, in all honesty, felt a bit embarrassed to have such attention aimed his way. It was as if Taylor had his own private show, an intimate seduction with nothing but his pleasure in mind.

When Nevada reached for the snap of his pants, Taylor sucked his bottom lip in and chewed on it, anxious and excited to see what had been hidden under that denim material. Nevada had a nice ass. Taylor knew that, but he wanted to see it in the flesh.

He also wanted to see just how big the guy’s cock was. Taylor shoved to his elbows, his gaze riveted to his mate’s groin. He felt like a kid staring into a big glass window of a candy store, salivating at the treat in front of him, desperate to slide that sweetness into his mouth. Or, in this case, his ass, but the mouth was a sure bet as well.

Nevada flipped one side of the opening outward and then pulled it back in, a teasing glimpse of the dark hair nestled above his cock. Just from that brief show, Taylor caught the fact that the man kept his hairs trimmed. He liked that.

Turning, Nevada glanced over his shoulder and gave Taylor a wicked grin, his eyes sparkling with mischief. Taylor’s breath caught when Nevada lowered his jeans until they hugged the flare just under his ass.

Taylor groaned. “Stop teasing me. You’re going to make me come before anything gets started.” He was panting as he said it, licking his lips. He decided to get things moving faster by palming his cock in his hand and stroking it slowly, giving a show of his own.

“Yes,” he said. “I think so because of the way you’re looking at my hand on my cock instead my face.” 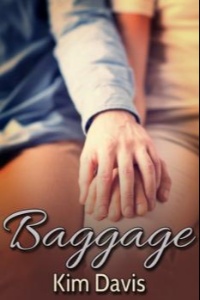