When the invitation arrives, successful erotica romance author Paige Gillette has mixed emotions about attending her ten year high school reunion. Until she views the guest list, that is, and discovers that Vincent Martinelli, the man voted "Most Popular Teacher" by the class, will also be in attendance.

Just recollections of the sinfully handsome "Italian Stallion" -- as the girls loved to whisper behind his back when they weren't too busy fainting -- sends adrenalin rushing through Paige's veins. In high school, the sexy teacher had driven her to obsession, and now the temptation to see him again becomes too great for her to bear.

It doesn't take long for Paige to make a final decision -- she will indeed attend the reunion, and make it one steamy night to remember ... 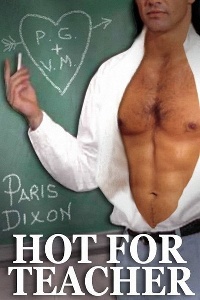 Paige headed for the bar. To her relief, she found the line a bit shorter than her last visit, since many of the guests had finally settled at tables. She made idle chitchat while waiting her turn, mostly with the escorts or spouses of various classmates, she supposed, since she recognized no faces and they wore no name tags. She preferred it that way -- with her nerves already wound tight, she wanted to answer no questions regarding her life. After all, she couldn’t even flaunt her amazing success in the literary world without revealing her pen name, and she felt in no mood to embark on a series of fibs and half-truths to classmates for whom she cared little.

Just as the DJ started playing Madonna’s “Erotica,” Paige felt the warm presence of someone moving in close behind, and hot breath on her ear.

“Miss Gillette, I was hoping we’d run into each other this evening.”

Paige instantly recognized that voice, the rich tenor that haunted her memories, that dominated her fantasies, that possessed the same inflections and resonant tones she had gifted to her most famous male character. And it gave her goose flesh.

With her heart leaping into her throat, she turned, half-afraid at what she’d find.

She needn’t have worried. The sight of Vincent Martinelli, Trimble High’s English teacher extraordinaire and assistant track coach, now in his early thirties, still had the invincible power to clench her stomach, enliven her pulse, and rob her of all breath and sane thought.

Not a single strand of gray marred his raven-black hair, still lush and shimmering in cleanliness, still cut in a rather unruly style that straggled down to his collar. In keeping with his rather “unconventional teacher” image, he wore a tan blazer over a black pullover shirt, its tautness advertising his wealth of chest and ab muscles. From his neck dangled a silver chain, its mother-of-pearl shark’s tooth pendant resting in the patch of swirling chest hair that peeked out from the top of the shirt’s V-neck collar. His blue jeans encased the long, sinewy runner’s legs Paige remembered so vividly, not to mention the mound at the juncture of his thighs that had always arrested her gaze during classes.

And that winning, dimpled smile, those intense, blue-gray eyes, that five-o’clock shadow on his upper lip and firm jaw -- damn it, did any man have the right to be this handsome? -- had not changed an iota, sending shivers of longing down Paige’s back and directly into her crotch.

It felt as if she had stepped into some cartoon “way-back” machine and returned to her high school years, when just the presence of this six-foot-two package of outrageous masculinity filled her head with dizzying, lascivious fantasies. If this were a cartoon, she thought, a gigantic red heart would have already shot from her thorax, throbbing wildly in mid-air, her drool-moistened tongue would have carpeted the floor, and her eyes would have bugged out like oversized Ping-Pong balls. She supposed she looked like the flip side of one of Blythe’s “dance soldiers,” practically quivering in desire at the man standing before her who radiated such intense sexual charisma.

Stranded with Her Bullies (MFMM)
Sam Crescent
In Shelf
$3.99
Tweets by
sirenbookstrand