Austin froze. He’d just been putting a group of magazines in the rack when he felt the soft touch of James’ fingers on the back of his leg.

James was sitting on one of the milk crates, and when Austin looked down at the man, he had such a sweet smile on his face that could only be described as catty.

Or kittenish. Either way, he was looking for trouble. That much was clear.

Heat flushed up Austin’s neck. “We only got here an hour ago.”

James’ hair had grown out a tiny bit in the last two weeks. It was long enough that Austin was able to spike it with some gel he sold here. He didn’t know why, but he liked playing with James’ hair.

He also liked playing with his fur when he turned into a wolf. Those were fun times, too.

James scrubbed his hand through his sandy-brown spikes, ruining them. “Pay attention.”

Austin turned away, focusing on stopping the blood flow down to his cock. Somehow, James made himself look even better when he did that to his hair. He was so sexy without even trying.

“I’m paying attention. You’re trying to pull me away from my job so you can get some in the back room.”

Austin twitched when James moved his hand, still smiling that sexy smile, as if he knew what sort of effect this was having on Austin.

“We’re with each other every day.”

Austin swallowed. “If you’re bored, you can get something to eat in the diner.”

Austin only started coming back to work two days ago. He owned part of the building that this gas station ran out of. It was the smaller part, with the diner taking up most of the space, but there was a back room where Austin kept his stock and the computer that kept the security footage and the safe.

He’d updated his equipment since he was kidnapped right out of this place a couple of months back. Austin never wanted to go through something that terrifying again. He was still healing, though he was mostly better.

Austin still kept the brace on his knee whenever it started to throb. Today he was wearing it, but James was making him forget all about it whenever he touched him.

“I could get something to eat, but then I’ll just bring it back here, forget about it, and eat you instead.”

The heat in Austin’s face worsened. He was so embarrassed he started to laugh. “Jesus, you’re incorrigible, you know that?”

James grinned. “I know. I also know it increases my chances of being with you. It was pretty hot the last time.”

James kept right on grinning at him. “Don’t make such a miserable face. I know how much you like it when I give you attention.”

“Uh-huh.” Yeah, he didn’t want to admit to that so much. “I can’t go in the back room anymore without blushing over it, you know that, right?”

“What if my dad comes in? What if some customers come in?”

James snorted. “We used that Back in Fifteen Minutes sign you made last time.”

Austin still had that sign. He’d just written it up with a Sharpie and taped it to the window of the door. Any customers who wanted to pay for gas could do it at the pumps. Anyone who wanted drinks or snacks went to the diner.

It wasn’t a responsible thing to do. It wasn’t good for business either, but whenever James looked at him like that…

Austin reached down and grabbed James by the hand. He yanked the other man to his feet. All the while, James grinned at him like he knew exactly where this was going. Of course he did. Why else would Austin walk his way to the back room with James like this?

He turned to go, but James was quick, abruptly snapping his hand out and grabbing Austin by the collar of his shirt.

“Whoa!” He pulled Austin back, and then their mouths were crushed together.

Austin sucked in a deep breath through his nose when their lips connected. His heart damn near exploded when he felt the tip of James’ tongue licking at the crease of his lips.

James pulled back before Austin could open his mouth, and he still had that eager grin on his face. “Hurry back.”

More heat. Austin briefly tensed, feeling the blush rising all over his body before he ran out of the back room.

“Don’t run so much!” James called.

Austin ignored him. His knee felt fine, and he really wanted to get that sign up on the window before anyone else came in and interrupted him.

He grabbed his sign from the back of the counter and brought it up to the front door before locking it. It was Sunday, so thankfully it wasn’t too busy.

Austin rushed to the back room. He half expected to see James naked and waiting for him with that grin on his face.

He was waiting and grinning, but not naked.

James blinked, the smiled melting away before it came back. “You thought I’d be out of my clothes?”

Christ, Austin’s face was going to explode with all the heat in his cheeks.

James laughed at him. “You’re as bright as a neon light!”

“It’s a little funny,” he said, sauntering over to him. “Besides, I wanted you to undress me instead.”

Austin had wanted James inside him as soon as possible, thrusting away, but now that he was there, Austin had to ask him to slow down. “G-give me a minute.”

James didn’t tease him, didn’t tell him “told ya so.” He just did as he was asked.

He also curled one arm tightly around Austin’s middle, as if he was hugging him. Austin liked that. He really did. He liked it even better when James put his larger hand over top of Austin’s where he was gripping the corner of the metal shelves.

“You let me know when you’re good.” James’ voice was panting, breathless in Austin’s ear. Austin nodded, clenching his eyes shut against the intrusion and the pleasure he felt right around the corner. All the while he did everything he could think of to force his body from clenching too tightly as well.

He’d mastered the art of reciting the alphabet in his head backwards in all his attempts at keeping his control.

When his body finally relaxed somewhat, allowing James to sigh as he pushed all the way inside, Austin groaned when he felt the burn extending deeper inside him and he felt the rush of pleasure.

“Th-thought you said you were going to wait for me to tell you to go?”

“I did wait,” James said, panting for breath. “I waited until your body told me you were ready.”

Sometimes Austin honestly couldn’t tell if James was just a big sap, or if this was how all alpha werewolves talked.

Then he absolutely didn’t care about any talking at all when he felt the first couple of easy, testing thrusts deep inside him.

Austin grunted, pushing his ass back against each forward thrust, mostly so he wouldn’t rock the shelf too much.

James kissed Austin’s mating scar, then bit it hard enough to make it noticeable, but gently enough to not break the skin.

“Turn your head,” James said, grunting and growling in Austin’s ear, his breath warm across his skin.

Austin shivered, doing as he was told, turning his head as much as he could so he could look back into James’ eyes.

They were red eyes, the cold of the alpha wolf inside him when it wanted to come out. Austin shivered, but it was a good kind of shiver. “Oh fuck,” he said, right before James kissed him.

Austin’s free hand scrambled down to his dick. He needed to touch himself. He needed to feel that extra little bit while the head of James’s cock brushed and teased his prostate again and again. It was too much. It was too good, and Austin needed so much more.

The shelf rattled and shook as each thrust picked up the pace. Austin didn’t care about that or the noises he was making. The door was locked, after all.

Felt good. Felt so good. More of that energy flooded him, the energy that came whenever he was having sex with his mate. It invigorated him, made him feel like he could fuck and be fucked for hours on end. He probably could be. This was too good. He was going to come quickly. He couldn’t hold himself.

“J-James,” Austin moaned, wanting to give the man some kind of warning.

James didn’t answer him, but another guttural moan did leave his throat, sounding almost like a growl when he reached around and brushed Austin’s hand out of the way. James’ hand was better. Austin had learned this ever since being with James. Someone else’s hand was always so much better than his own. He liked it better. That was for damned sure.

James’s thrusting became harder. He didn’t move quite so quickly this time, but each sharp thrust did send a lewd, slapping noise into the air that made Austin shiver and moan. He fucked into James’ fist while trying to push back against the sensation in his prostate. It was good. Too good.

James growled again, and when Austin felt the man’s teeth against his bite scar a second time, they felt sharper. Much sharper. “Do it. Don’t wait, sweetheart.”

James’ fingers played with the underside of Austin’s cockhead, and the sudden rush of sensation was too much for him to hold back. Austin shouted and came hard, as if the orgasm was being yanked right out of him.

James’ thrusting became so much wilder in that moment, the sound of his grunting and moaning harsher in Austin’s ear, and he loved it. He clenched his hole harder around the man’s cock, listening to the rumble of pleasure and delighting in the fact that he was able to do this to a big and strong alpha werewolf.

“Do it, come on. Come on,” Austin said, wishing the condom wasn’t between them when James tensed and moaned.

Well, almost as much as he’d wanted anything else, and when James slumped over Austin’s shoulder, Austin soaked up the warmth and affection he felt radiating from the other man.

It was like having a good snuggle after sex, only not in a bed.

“We can’t keep doing this at work,” Austin said softly, though in that moment he wasn’t so opposed to it.

James nodded anyway. “I’ll take you out on a proper date in the city. We’ll go to a nice hotel, have dinner and a movie, whatever you want to do.” 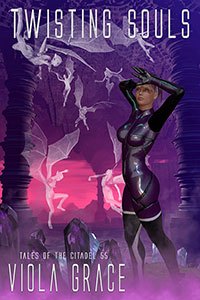