A lounge singer, haunted by the past, Nina Grey pours her soul into her music and her trysts with women. But having a sexy roommate like Jordan, who looks at her like he can read her thoughts, makes her question her true desires. Would one night in his bed ease her turmoil, or complicate their friendship?

Jordan Martin views Nina like a glass of fine scotch, yet two things stand in his way. Nina claims that she doesn’t like men, and she doesn’t know a thing about his jaded life either. But when her past catches up with her, and secrets are exposed, Jordan is forced to show his true colors, or risk forever losing the only woman who stirs his soul . . . 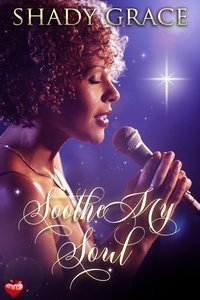 Everything about her turned him on. From her curvy ass to her smile that was warm enough to melt a frozen lake . . . especially with the little gap between her front teeth. If he didn’t concentrate, when her hazel eyes glinted under the lights, it could reach right into his jeans and stroke his cock to life. He even thought the hemorrhoid cream she put under her eyes every night was fucking cute. All those little things made Nina special to him.

Having these uncontrollable feelings around her confused him. He didn’t know what to say or how to act. He didn’t want to scare her away. Being a gentleman was one thing, but being himself was another. Deep down, he knew that if he couldn’t have her physically, he’d always stand in the shadows and admire her from afar, and be her friend—it was better than not having her in his life at all.

A wry smile curved his lips. Nina may think she only desired women, but Jordan sensed a lot more to it than that. She was hiding something, probably using her fun with other women as a front. He got that. Experimenting wasn’t a bad thing. But, still . . .

The question lingered like a curse at the back of his mind; were her lovers the problem, or was Nina holding back? He’d be tempted to give up his freedom and go to jail just to know her secrets.

Nina turned her sweet face, and she looked at his arm, gnawing her lower lip between her teeth.

Rendered speechless, he stood frozen, captured by the curve of her full, peach-colored lips. His gaze wandered down to the twin melons beneath her V-neck shirt, and his mouth went dry. He wanted to cup them in his hands, hold the weight of each plump breast, and suck on her taut nipples. He’d nip them until she begged him to stop the exquisite torture—

“Missing something?” She held out his trusty bottle of Glenfiddich.

“Oh, right.” He snatched the bottle, averting his gaze from her chest, and proceeded to pour a healthy measure, at least three fingers. Fuck it, may as well be five.

Nina chuckled, raking her hazel-eyed gaze over him. “Planning on getting drunk, are we?”

“Might as well.” He turned away, concentrating solely on his drink.

Nina leaned forward, putting her face directly in his view over the counter. He didn’t want to look at her, but she didn’t give him a choice.

He smiled, knowing it didn’t reach his eyes. “Nothing, babe. Just a long day.” A long day of bullshit thoughts.

Blissfully unaware of his reality, she stood on tiptoe and kissed his cheek. The impression of her sweet lips burned his lonely flesh. He couldn’t help wondering how those luscious lips would feel directed elsewhere—

Lost Without Them (MFMM)
Becca Van
In Shelf
$5.50
Tweets by
sirenbookstrand