Heat Rating: Sextreme
Word Count: 55,451
20 Ratings (4.5)
Contemporary Menage a Trois/Quatre Romantic Suspense
In Bookshelf
In Cart
In Wish List
Available formats
PDF
HTML
ePub
Mobi
Cover Art by Les Byerley
Reviews
I just finished reading this! As always Dixie brought the characters to life, showing once again that even with a past that would scare the heck out of anyone, love is always a possiblity. I can't wait for the next book in the series.
plnemec
Another awesome story by Dixie! Just love the way she can reach into your soul and transfix you for several hours while you escape to a wonderful world of love and danger. The good guys always win and they win their lady's heart!! Each book gets better and better!
rhondavb
Read more...

The Battlefield Series 8: Fears of the Brokenhearted (MFMMM)
Dixie Lynn Dwyer
In Shelf
$4.99
All Books In Cart
All Books In Bookshelf
Excerpt

“You two keep your fucking hands off our woman. You ever come near her or touch her again and I’ll finish the job,” Shimmy yelled at them.

Dominick reached for her hand and helped her up. “Are you okay?” he asked her.

Cali nodded, but her eyes were glued to Shimmy. He had his fists by his side, his lip was bleeding, and he looked enraged.

“Fuck you!” Jester said as he helped his brother Larkin up. Shimmy stepped forward like he would attack and something told her she had to stop him from seriously hurting these men. He was so angry. She jumped in front of him and pressed her hands against his chest.

“No, Shimmy, don’t. It’s over. They’re leaving,” she said to him. His blue eyes looked wild, and in the very short military haircut he had her shaking with intimidation. She looked at Larkin and Jester.

“Don’t bother me again. Don’t ever do anything like this again. Leave. Please, just leave,” she said. At this point a few other people started to come out of the Filling Station to see what was going on. Shimmy had his hands on her hips, and she kept caressing his chest.

Dominick placed his hand on her shoulder. She looked up at him. “Are you sure that you’re okay?”

Cali nodded, and as she lowered her hands, Shimmy looked down at her. His eyes scanned her face, and then lower. When they widened and his hands tightened on her hips, she didn’t know what came over him.

“That’s a bullet wound. You were shot? When?” he asked.

She panicked, felt her lips part, prepared to lie, and then she felt Dominick’s hand on her arm, and then his fingers grazed over the scar on her chest. Her shirt had ripped. She hadn’t even realized half her breast was showing, and worst of all, the bullet wound she tried so desperately to hide.

“Are you guys okay? What the hell happened?” Tank, one of the bouncers, asked.

She shook her head at Shimmy and Dominick, and she pulled her shirt up. She hoped they kept her secret.

“We’re okay,” Dominick said and walked over to talk to Tank. She grabbed her purse and pulled out some tissues. Shimmy leaned against her car and stared at her in a way that she couldn’t describe. She stepped closer.

“Your lip is bleeding,” she said and reached up with the tissue to wipe away the blood. She got it all. She was shaking she was so upset. When he gripped her wrist she paused and stared up into his blue eyes. She didn’t know what to expect from him. A thousand questions? A put down? Him blaming her for this happening and saying it was her fault? She gasped when his other arm snagged her around the waist, and he pulled her between his legs.

She held his gaze as he lowered her arm behind her back. He held both her wrists in his grip, and instead of feeling scared, she felt entirely turned on. His mesmerizing eyes showed something she hadn’t seen before. He looked at her scar, then her neck and her lips.

“Shimmy?” She said his name, and he pressed closer and kissed her. Immediately his free hand glided from her waist up her back, under her head, cradling her head. He devoured her moans, and she pressed closer, wanting to feel more, aroused by his control and restraint. He smoothed his other hand from her wrists he had bound and spread his palm and her hands over her ass. She remained in place as if his move was a silent indication for her to remain with her hands behind her back. She didn’t know why she thought that or why she obeyed, but she did. His lips moved from her mouth to her neck as they gasped for air. He licked her skin, nipped her collar bone, and she kept her head tilted back and moaned.

“Shimmy,” she whispered on a heated breath, and his tongue swirled along her other shoulder, then over the scar and along her breast.

She tightened up as she felt Dominick press up against her. He tilted her face up toward him and covered her mouth, and he kissed her, too. It was too much. She couldn’t even explain her body’s reaction. Hands smoothing along her hips, Dominick’s hard cock and thick muscles against her rear and her back as he kissed her with her head tilted to the side, giving his brother fuller access to her breasts and exposed neck. He plunged his tongue in deeply as Shimmy maneuvered his tongue into the cup of her bra and licked her nipple. She moaned and shook as her body erupted. She tensed up immediately at the realization that she just came while two men kissed her.

She pulled back and scrambled from their hold and turned away. She pushed her top back up, and a second later, Shimmy wrapped her in his arms and held her from behind. “No, baby, don’t turn away. Don’t deny what just happened. I felt it, too. I fucking felt it, too, I swear to you.”

“I can’t believe that happened. Oh, God, this is embarrassing.”

Dominick was in front of her, cupping her cheeks as Shimmy softly scattered butterfly kisses along her neck and shoulder.

“Don’t ever be embarrassed. I love that you came in our arms. That you were as turned on as we were. I want all your orgasms, Cali. My brothers want them, too.”

“So, what happened with you and Cali? Find anything out?” Culhane asked him.

As Warren told him everything that happened, including kissing her by the tree and then about her sharing some common ground with Shimmy, he was shocked.

“If I hadn’t been right there with Wayde to see the evidence of kids fucking around, I would question whether Cali was still in danger and that this had something to do with her past.”

“I thought about that. I’m assuming she did, too, but she didn’t seem entirely scared at what happened. I mean, she was upset about it, but it didn’t freak her out. I think most women would be hysterical getting shot at like that and then getting injured and having to run through the woods to safety. She took it like an experienced soldier, yet I know she wasn’t in the service.”

“Which could make us assume she’s been shot at before, at least.”

“Or she went through something worse than being shot at and anything other than what happened is minimized because of that experience. I just don’t know, but add in what we do know and I’m not liking the images I’m getting.”

“I hear ya, Warren. You kissed her though.”

“Like you haven’t thought about kissing her since laying eyes on her.”

“I thought of doing a hell of a lot more.”

“She’s young though, and inexperienced I think, or at least seems less experienced.”

“We’re in our thirties. She’s twenty-four.”

“You find that out from Wayde?” Warren asked as he pulled the truck up the long, dirt road leading to their ranch.

“I found out a few things. One being that she is more mature and experienced than she first let on because she had gone through some tough experience, Wayde said. It took her a year to finally decide to expose herself to the public and get out to Repose and find a job. She met Brooklyn, and of course, Brooklyn saw something in her and hired her.”

Warren smiled. “Brooklyn is an angel. Look what she did for Dominick and Shimmy.”

“I know, she could have hired from an ad or someone she knew but took a chance on him. He loves that job.”

“So she said to you that she shares similar difficulties to what Shimmy does?”

“You and I both know that if she has PTSD it could have been caused by any number of things.”

“I don’t want to start thinking of all of them and making myself nuts. The best thing to do would be to sit down with the others and discuss this and then work on spending more time with Cali.”

“Not sure she’s going to just give in. She seems to want to fight this attraction.”

“She didn’t push you away, so some convincing will need to be done, but if this attraction is as strong as it feels, then she’ll come to her senses and learn to trust us.”

“I think Shimmy and her are going to continue to bash heads. They both got something to prove in order to make them feel invulnerable.”

“Maybe that’s what it will take to bring them both out of their shells and let us in? Maybe this is all meant to be after all?” 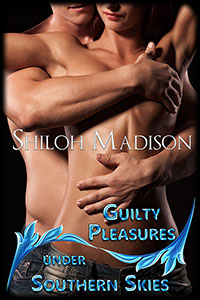 Hunters of the Gods 3: Pride of a Princess (MFMM)
Dixie Lynn Dwyer
$0.99
Less than 2 days left
Tweets by
sirenbookstrand