Mathias is a rogue angel sent on a mission to find and protect a man who is destined to either become a feared general of Hell, or a powerful warrior of Heaven. He finds his charge in the form of a wolf, and when it transforms to a man and is in clear lust with him, Mathias gives in to the emotion he has never felt before. Taylor Slade knows his mate when he sees him, and he wastes no time in claiming the innocent angel, but the discovery that angels and demons really exist, and that he's not as crazy as he once thought, is not a happy a moment. Those demons still want him, and the angels believe that Mathias is a traitor. Both must work together to keep Taylor from losing his sanity to the demons, as well as prevent the angels from taking Mathias back to Heaven and punishing him by forever separating them both. 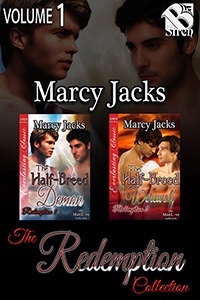 Those heavy paws came down on his arms, locking them to the ground. The wolf seemed to work as though it had gone mad, but clearly, it still knew how to keep a prisoner, and this time it had Mathias on his back, where he could look at the long row of teeth just before those jaws opened.

The small demons were back, surrounding the both of them, chattering in their odd language, but their raised fists and wicked smiles as they jumped up and down could only be encouragement as they worked their evil magic and tempted the wolf to take Mathias’s life.

The yellow eyes became golden, and the chest puffed out as the wolf stared down at him, then it lunged, and the demons shouted out their victory.

The teeth were around his neck. Mathias could feel them pinching his skin, but the killing bite never came.

He opened his eyes, hardly able to believe he’d shut them to begin with. The hot breath of the werewolf above him made his face and body uncomfortable, but he didn’t dare move.

Then the wolf inhaled deeply through its nose, and it did it again before the teeth were removed from Mathias’s neck. The wolf did not let him up as it stared down at him, however. Those eyes were no longer angry or willing to kill, but now they contained a trace of something else. Curiosity. Mathias recognized that, especially in the way the head tilted to the side just a little. There was also something else he couldn’t place, something that made the pupils of the wolf widen as it sniffed at his neck and chest some more.

Then that warm tongue lapped at his face, and Mathias struggled in earnest this time, releasing a disgusted shout.

The werewolf, stupid creature that it was, seemed to take that as a sort of sign of affection and placed even more of its weight on top of him, rubbing its face against Mathias’s, and then its whole body.

Mathias squirmed and wriggled, which only made the ruined part of his armor pinch and scratch at his back, breaking open the skin, but he had to get out from under the wolf that had him pinned.

Finally, he did, and he managed to back away several steps, the wolf rising to its paws and shaking itself, loose hairs flying. Then it just looked at him.

Only then did Mathias take note of how silent the little demons had gone. He looked up at them, a paranoid fear coming on.

They weren’t attacking or looking at him like he was lunch with their black eyes. They were just staring at him. Not the same way that the wolf did. The wolf’s stare held more hunger than theirs. They almost looked confused.

Maybe that was what made the wolf so friendly all of a sudden. Was it possible that the demons were distracted by something and the spell the wolf was under had been broken?

Well, they were far enough away from other people, and with the wolf distracted, Mathias had an easier time banishing the demons. He concentrated and lifted his hand to them. Each and every single one of their little round bodies made a small explosion of black smoke and red sparks. The stink of demon lasted in the air for only another minute before it was carried away by the wind.

The head rush came next, and Mathias stumbled on his feet for a second before catching himself on―

He pulled away from the wolf, stunned that it had come so close to him and was still looking at him with those eager eyes. It caught him before he could fall? That was certainly unexpected.

Mathias shook his head to clear it. There had been more of those little bastards than he’d thought, and their hold on the werewolf had been stronger than Mathias imagined as well, otherwise he wouldn’t feel so drained of energy.

Luckily, he’d brought something for that, but he would still have to be careful with how he worked. He had to remain on his feet until after the risk was entirely gone. He couldn’t allow this person in front of him to become a tool for Hell.

“Can you understand me?”

The wolf’s head cocked to the side. It wagged its tail.

He wasn’t sure what to make of that.

It no longer appeared to be a threat, and the gray wolf certainly wasn’t giving the impression that it wanted to eat him for lunch.

Mathias would take the risk. He was here to save this man, after all. He stepped forward, reaching out his hand. “I won’t hurt you.”

The wolf did not hesitate like Mathias expected it to. It trotted forward, sniffed at Mathias’s offered palm eagerly, tail still wagging like a happy dog, and then it shifted into a naked man.

He sighed. At least he could work with this.

He concentrated some more on his form. This part took up very little energy, especially because he wanted the man in front of him to see what he looked like. He wanted him to see his wings. There would have to be some secrets, but the fewer, the better.

The man with the soft, brown hair just blinked at him, and it was then that Mathias noted the lack of change in the eyes. They were still the golden color of the wolf.

Mathias then noticed something else about the man. He had an erection.

He realized too late what that hungry look in the man’s eyes was as he charged. He was not attacking, and so Mathias did not dare attempt to defend himself as he was grabbed around the shoulders and kissed for the first time in his life.

Taylor nodded, but he didn’t remove his hand. He continued stroking Mathias like he was a cat that he wanted to make purr.

Mathias purred for him all right. His knees buckled, and he would have fallen to his knees had it not been for the kitchen island behind him.

“You’re so fucking beautiful, you know that?” Taylor whispered into his ear. “You’re mine, too. Say how much you want this.”

More of that possessive speak. Mathias would agree with him until his voice no longer worked if that would keep the man’s hand moving in that circular motion around his cock, but he would eventually have to speak with Taylor about the unfortunate end to their tryst. Mathias wanted this, and he never wanted it to end, but he was an angel, and he was not above admitting to being more than afraid of having his wings torn out to become human. That, he would never do.

“Say it,” Taylor growled, his eyes glowing all the brighter. “Tell me you want this.”

“I do,” Mathias moaned, bushing back against that glorious hand and bracing his fists on the island behind him.

That seemed to satisfy Taylor’s inner wolf somewhat. “Good,” he said, removing his hand and dipping low just enough to wrap his arms around Mathias’s knees. He lifted him up and over his shoulder, then all but ran back into the bedroom they had shared the night before.

The sudden shock of having a shoulder in his gut, knocking the wind out of him, nearly did away completely with his lust, but Mathias was hard again, wanting the man desperately, when he was dumped back onto the still-messy sheets and Taylor’s hands were clawing at the button and zipper of the pants he wore.

With both of them working together, they managed to get the things off of his legs without destroying them. Taylor pulled off his own pants and kicked them away, and the sight of his cock, hard and beautiful, held Mathias transfixed. Without thinking about it, he reached his hand down to grasp at the organ.

The way Taylor’s golden eyes fell shut and his mouth dropped open as he threw his head back was lovely.

Mathias gripped him just a little bit tighter, and then he circled his fist around the shaft, drawing a moan out of the other man.

“You are evil,” Taylor said, his hips jerking as Mathias touched him.

“Stop, stop,” Taylor said, and Mathias yanked his hand away as though he’d been burned.

Taylor grinned at him. “I want to do something to you. Been wanting to do it since I first saw you with nothing on.”

Mathias had no idea what he was on about but understood just a little better when Taylor dropped to his knees down on the side of the bed, pulling on Mathias’s legs until his knees were bent over the side and Taylor was leaning between them.

He propped himself onto his elbows, if only just to see what the other man was doing.

Taylor put Mathias’s swollen cock in his hand, and now he was looking at it like it was a special sort of treat. Like it was ambrosia.

Mathias suddenly recalled the way Taylor had been sucking on his fingers, and his cock jumped at the thought.

“Surely not, you cannot mean to―”

His words were cut off when, yes, Taylor did indeed do it. He opened his mouth and slid his tongue along the shaft of Mathias’s cock. From the very bottom all the way to the top and dipping into the slit where his pearly fluids were gathering.

Then he put his lips around the head, and Mathias thought he would die with pleasure and embarrassment as he fell backward against the bed.

He was not looking at Taylor at this point, but he could still feel the way the man dipped his head lower still, taking more and more of Mathias’s dick into his mouth, and those wet lips travelled down until almost all of Mathias’s cock was submerged.

Taylor tightened his lips and swirled his tongue, and then he began to suck back on it.

No, now Mathias would die from pleasure, though he was hardly embarrassed any longer, not when Taylor was doing that to him.

He put his hands over his eyes to ward off the stars that were exploding behind them, and were those sounds coming from him?

He had to see, he could not look away any longer. Mathias forced his hands away from his eyes and lifted himself to once more look down on his lover.

The sight of his mouth, stretched around the base of Mathias’s cock, was nearly his undoing. It was so…so…He did not have words to describe it or the shivering thrill that jolted up his spine when Taylor winked at him and continued to pull back and forth with his mouth. 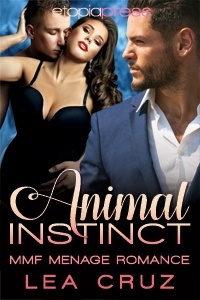