What can a simple man offer the most deadly of women? Money? Love? Or an adventure with the promise of more to come?

Jaden Bishop is closed off to the possibilities of love and romance. She is a premier assassin, trained by Ronin warriors as a child after she was left orphaned. By day, she bakes cupcakes, and at night? She keeps her body honed by training the weapon forged by her childhood. Interpersonal relationships have no place in her life.

But none of that matters when it comes to love.

Jonah Whitmore fell for the mercenary woman before they met, via the World Wide Web and all of the information he could plumb from his computer. He needs Jaden’s expertise, but he wants the woman for himself. He will stop at nothing to make his goals reality. And that includes making the wily assassin his woman. 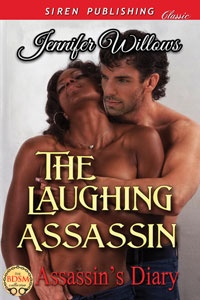 Heat Rating: Scorching
Word Count: 82,234
4 Ratings (4.3)
Contemporary Interracial Romantic Suspense
In Bookshelf
In Cart
In Wish List
Available formats
Mobi
ePub
PDF
HTML
Cover Art by Harris Channing
Reviews
Loved it! I was hesitant to purchase it, to be honest, because I didn't really care for Ms. Willows' other books. The story of this book appealed to me and I am very thankful I took the risk. Great story, terrific plot, and deep characters made this book rock. I highly recommend and will automatically purchase any more books in what I hope will be a series!
Sodes16
Read more...
Excerpt

“Who are you?” she asked as if she already knew and just wanted to see if he would shovel dirt from his own grave with an inaccurate response.

“Jonah Whitmore, at your service.” He readily gave her the truth, as he knew that as soon as he left, she would start in her dig for information. She was too cautious not to, and it was the same thing he would do if the roles were reversed. His family was too well known for him to lie to this woman and get away with it for long. Even if she was a dumbass, and she was far from that based on his knowledge, she would eventually learn the truth.

“Nice to meet you, Jonah. I’m Jaden Bishop.” He already knew who she was, but he bet she had figured that out, too.

She stuck her hand out, and he shook his head.

“Well, since we are becoming acquainted with each other, I think in the spirit of fairness you should come around here and greet me properly.” He knew it was a risk. She could easily get offended and rebuff him, but she surprised him by complying with his thinly veiled command. What he could see from the other side of the counter wasn’t even the half of it.

At first he assumed her jeans were just very tight, but when he saw the entirety of her, he realized that she wore cotton-and-spandex-blended tights patterned like denim. They fit every inch of her long legs to the ankle with her custom bakery logo tee above the painted-on pants. She wore a pair of Nikes that he personally preferred due to their comfort even when he was sweated through to his underwear. He had the exact same ones, only his were black-on-black and special ordered from the website.

Jonah was sure that hers were ordered the same way, as he knew they didn’t offer the hot-pink-and-lime-green combination in stores. She was tiny, but every inch of her frame was well trained and honed for battle. Most people that saw her deceptive stature would never believe she was capable of the things she had done in her life, let alone killing a fly. He had almost a full foot in height on her, but he knew if he was the average guy, she could have him flat on his back and begging for mercy in no time at all.

Her hair had grown on him in the moments since he saw her, and the pixie cut of the short strands only framed her face. The hair was too short to conceal anything from him, and he loved that fact. When he finally got inside the minx, he could see everything, and there was no way for her to hide how much she loved what he would do to her.

He couldn’t make her submit with the locks, which was probably her point in maintaining such a short style. In combat she couldn’t allow another person to use her hair against her. But that was fine with him. He knew of too many ways to gain her submission that he wouldn’t lament the loss of one of his favorites.

This time Jonah made the first move and proffered his hand to her. When she accepted the offer, he didn’t shake her hand. Instead he clenched her fingers and dipped his head to kiss her palm. The reason was twofold. First, he wanted to kiss her badly and knew that may not be in the cards just yet. Secondly, he wanted the chance to see if he affected her the same way she did him.

Her pulse raced, and he knew that he was right with his initial assessment. Jaden was definitely attracted to him. Her eyes were wide, as if the simple press of lips was more than she could deal with. He knew he was rapidly falling into the heat that burned her from within. But she quickly collected herself and took her hand back without him even knowing how she did it.

The shop was past closing time, but he didn’t care. Apparently she did, as she looked at the door then back at him. Her perfectly arched brows canted upward, and he wondered what she was thinking. Was she trying to tell him to go? Or did she want to lock the door?

“Is there something you would like to tell me, Jaden?”

It only took a few moments to roll the prophylactic over his length, but when he was done, he rolled atop her as if a starving man hell-bent on reaching a mirage buffet. Her mouth stroked over his, and Jonah sucked her fat lip between his teeth. The flesh was released with a scrape, and the cavern of mouth it harbored was a sea fresh oyster he would have for lunch.

No sooner than Jaden grunted from the scratch of his sharp incisors did her hips jerk several times in succession. He matched the needy bucks with his own, and she gripped the fat stalk of his cock. Her hand rolled north then south, and on the ascent she rubbed the mushroom cap of his head over her slit. He prodded her legs to wrap around him, and when she was completely open, he thrust forward. At first she clenched, fist-tight, and he wasn’t sure if he would be able to touch bottom without hurting her.

But as he pressed on, the journey to fulfillment was made easier as she gave herself to him wetly and her body arched upward to greet his. The joint opposition of force made her tight snatch give way entirely to his cock and to their lusts. Jaden bit her lip, and even with the full flesh gagging her, musical cries pealed into an orchestra sustained by the very air they breathed.

His sole audible contribution to the song of sex was a muttered mass of groans as their bodies forged closer together. Once she was close to peak, her moans were a sleek inhale of air that squeaked within her throat as her snatch filled. He was so intent on satisfying the wet walls of her pussy that he couldn’t analyze how she felt until he was there.

“It’s so good, Jonah!” she cried out, but he was too lost within her to respond.

He agreed, but hearing the pleasure she took from him so easily made the words a bitter pill to swallow. The banquet of coitus was stunning in the sense that he wanted the fuck to last forever, even though he wanted to come so badly that he needed it all to be over. He had to plumb satisfaction from her rippling cunt, but before he did, he had to make sure that she gorged on his cock as well.

In that moment there was no other way for their first fleshly mating to end.

Jonah took a deep breath he didn’t realize he’d withheld. He couldn’t stop taking her, even when he wanted to take a moment to settle down before he ruined his only condom. Even when he was nearly at explosion, his body continued dipping within her compulsively. Jaden arched her back, and he aided in bringing her closer to him with a single arm wrapped beneath her spine. She clenched him, one hand at his shoulder and the other at his hip.

She looked worried, and he wondered if she was afraid to let go with him. That had no place between them, not now, not ever. “I can take it, Jaden. You can’t hurt me.”

The words seemed to release something within her, a floodgate that she kept dammed up. But she had no need of that with him. Jaden clutched on to him for dear life, even as she convulsed and gyrated wildly. It was as if she wanted to be where she was, even as she wanted to run from him, too. He could feel the tattoo of her nails embedded in his skin, and he could imagine the half moons would stipple along his flesh for days.

The minute pain added a bite to their fuck and made his cock even harder than he could have ever imagined. The rod of erection felt as if he would split wide open from the added pressure barraging him from all sides. She was completely and utterly tight around him, the wet tissues of her cunt carrying the grip of an anaconda, and that alone was enough to make him mad. His blood pressure rose dangerously, and he was sure that he would have a stroke when he came.

Jaden was close to coming. He could feel the orgasm burrowed beneath her skin waiting for the perfect moment to burst outward. She was supernova hot and delicately built but strong enough to take him on even in a full-on rut. There was little that he could do but give in to what their thrashing bodies demanded, and he did so with ease.

She was so enthralled with their mutual lusts that she threw herself at him with each thrust and rebounded only to come back full circuit again. This was agony and ecstasy all rolled into one mass of desire and potent lust. One thing he knew was he was so gone on her, nothing mattered but this. Nothing could come close to how right this felt.

There was a certain spice in the knowledge that the hands that grappled his body were capable of justified homicide. She was so delicate that the sight of her so open to his covetous desires made him want to never stop fucking her.

Owner of a Lonely Heart (MFM)
Karen Mercury
In Shelf
$5.99
Tweets by
sirenbookstrand