BAILEY MORGAN: Bailey Morgan is shy, sweet, and utterly clueless about sex.  When he’s presented with a beautiful mate, he’s more than eager to learn.  As a thrall, Ferris Jones knows about sex in theory but never practice.  As the two men struggle to form a lasting bond, the world undergoes a drastic change.

GANNON MORGAN: Gannon is stunned when he finds out the mate McBride has selected for him is deaf. Gannon feels slighted until he realizes he has more in common with the terrified thrall than he thought.  Alden isn’t too trusting, but he has no choice but to accept Gannon. Will the two men overcome their differences and manage to forge a relationship in this new world?

OLLIE MORGAN: Ollie Morgan rejects his thrall, insisting that he wishes to be alone. Determined to get to the truth, McBride is furious when he finds out there is an interloper on his land. Jonas Davenport has made tremendous sacrifices to be with Ollie, but just because he’s given away all his wealth doesn’t make their relationship anything but forbidden.

More From Seven Brothers for McBride 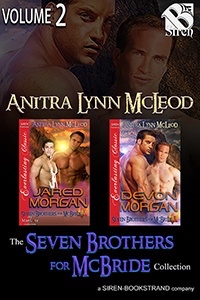 The Seven Brothers for McBride Collection (MM), Volume 1
Anitra Lynn McLeod
In Shelf
$3.99
All Books In Cart
All Books In Bookshelf
Excerpt

Bailey Morgan had never seen such a beautiful man. A surge of jealousy swept over him when he saw McBride’s hand on the man’s pale thigh, but Bailey pushed the uncomfortable feeling away. As the youngest, he doubted the first companion would be for him. Tears tried to well up, but Bailey wouldn’t let them flow. If nothing else, he had his pride. All he could do was watch with a sense of hopeless fascination, wondering which one of his brothers would receive the most stunning companion in the universe. If that dazzling creature were for him, Bailey swore to all the stars in the sky he would work three times as hard each day if he could fuck that amazing man each night.

McBride stopped in front of Bailey’s house, and his heart almost exploded out of his chest. Absolutely shocked, Bailey waited a full thirty seconds for McBride to move on. When he didn’t, Bailey tremulously asked, “Is he mine?”

“He is indeed.” McBride’s smile was reassuring. “His name is Ferris.”

“Ferris.” Bailey thought the name suited him. His hair was dirty blond and tapered around his forehead and ears. When he finally met Bailey’s gaze, he discovered Ferris’s eyes were molten copper. His heart skipped a beat. Bailey had long dreamed of a companion with gleaming metallic eyes.

“Help him down, Bailey.”

Trembling, Bailey reached out his hand. When Ferris slipped his hand in his and Bailey realized Ferris was shaking, too, he soothed, “I would never hurt you.”

Ferris smiled shyly and dropped his gaze. His copper eyes widened, and then he blushed.

Bailey realized his cock was pressing against the translucent weave of his tallos-picking suit. Without the protective fiber covering his body, the buds of the tallos plant would dig into his flesh. Since it was a hot day, he was bare below the protective garment. It was curious to Bailey how something so thin could be so shielding. The outfit was unsnaggable by the barbs that enveloped the tallos bulbs, but it was also almost entirely see-through.

“Off with the rest of you now. I will bring each of you a companion in turn.” McBride dismissed Bailey’s brothers, and they went after a few quiet grumbles. All but for Caleb. Rather than go, Caleb planted his feet wide and glared at McBride.

Caleb was going to ruin everything. For once, just for one time in all the years they’d been together as brothers, couldn’t Caleb let Bailey be first without making a mess of it? Caleb was the oldest and the biggest. Since he often caused the most ruckus, he usually got to go first with everything. If McBride took Bailey’s companion and gave him to Caleb, Bailey would never forgive either one of them.

“Maybe I’d like that.” Caleb spit on the ground, making the black dirt puff up around where the gob landed. Heat had made him sweat and plastered his long black hair around his face, neck, and bared chest. He looked savage and heartless.

“I will dock your percentage.” In opposition, McBride was calm and cool. His short brown hair was smoothed against his skull from the heat, which Bailey saw when McBride lifted his hat and finger combed his hair back before settling his hat back on his head. Unlike Caleb, McBride didn’t use his massive body to intimidate others. Rarely did he even raise his voice. There was something about his low-key manner that made Bailey eager to please him.

The threat to take away his share of the profits got Caleb to turn on his heel and enter his house. About the only thing that worked on the eldest and most massive brother of the Morgan clan was threats against his benefits. Pushing him around was not so effective, even with the prod. Caleb could withstand incredible pain. In fact, Bailey began to suspect Caleb liked receiving pain as much as he liked to give it. Watching Caleb fuck the sexdroid had been as fascinating as it was terrifying. Caleb had rammed his cock in so hard and fast he’d shattered the thing’s backside, which delivered a powerful shock to Caleb’s prick, given how he jolted and his long hair started to rise, but Caleb kept right on fucking until he’d come all over the twitching and sparking unit. After laughing, he’d kicked it and returned to his home, presumably to sleep. Bailey had gone home hard and disappointed, but filled with dreams of his copper-eyed companion.

“Come along, Bailey. It’s time for your first lesson.” McBride entered Bailey’s little house and went right on through the main room to the bedroom.

“Lesson?” Bailey followed quickly on his heels, noticing that, though McBride was a bit sweaty, he smelled of that high-end soap the landed gentrymen all seemed to use. No matter how many times he smelled that interesting aroma, Bailey had no idea what it was. Something off-world and exotic, probably. An expensive herb or flower, perhaps. Whatever it was, it smelled very good.

“I must show you the ways of a man with his mate.” McBride took off his cowboy hat and set it aside on the dresser. The battered fabric was once white, but after only a few weeks on the farm, it had turned gray from the black dust. He removed his boots, socks, and shirt. “You don’t wish to hurt him, do you?”

Ferris blushed and smiled at Bailey.

“What do I do?” Ferris stared at the massive tool jutting up from the nest of black hair. His companion was almost wholly unlike him. Where Ferris had almost no body hair, Bailey had a great deal all over his groin and legs. His chest was bare, but the area around his cock was quite dense and thick. His sac was covered, and somehow the thicket of hair gave his genitals an almost sinister appearance. Ferris was not afraid, not exactly, but he was a little intimidated.

“Do to him as he did to you. Explore him with your fingertips. Touch all the areas of his body. Notice what touches please him the most.”

“How will I know the pleasing touches?”

Ferris teased his fingertips all over Bailey’s hips and groin. He stroked along his sac, up his shaft, and then over the tender crown. Pre-cum slicked his finger, and he looked up as he licked it off.

“He enjoys watching you.”

Ferris went to the source this time by easing Bailey’s cock forward and swiping his tongue over the slit.

The growl Bailey made was exciting. He sounded like an animal that was hungry for blood and fucking. Excited by his command of a powerful man, Ferris tightened up around the device in his bottom, giving himself a dose of pleasure. Ferris slurped at the tip just as Bailey had done to him.

McBride’s flattering remark pleased Ferris. In the thrall house, no one ever told him when he did something the right way. They only punished him when he committed a wrong. It had been so very frustrating. Ferris found that praise worked so much better to instruct him.

“Take your other hand and cup his sac while you suck the tip of his prick.”

Bailey’s balls were large and heavy in comparison to Ferris’s own. But the dark hair that had seemed somewhat sinister was actually quite soft.

“Do you hear how strained his breathing is?”

“He is very close to climax.”

“Please don’t make him stop,” Bailey begged, his fingers stroking over Ferris’s hair. “I want to have my release in his mouth. I want to feel him drink me.”

Ferris wanted that, too. He would never know the ecstasy of drinking blood because he had no need to feed that way, but he could be different and feed off his mate’s pleasure. The very idea aroused him tremendously, causing him to flick his tongue under the sensitive spot at the head of Bailey’s cock.

“Since this is your first time, and you’ve done very well so far, I think you’ve lasted long enough.” McBride knelt down so he could watch Ferris more closely. “Suck a little harder as you lift his balls and squeeze them gently.”

Ferris followed instructions and looked up to see if what he’d done pleased his companion.

“Zooks!” Bailey uttered the swear with a breathless gasp. His entire form went tight from the pleasure of his release.

Ferris struggled to hold on to him and drink. McBride wrapped his fist around Bailey’s cock to prevent him from drilling any more of his prick into Ferris’s mouth. Had McBride not intervened, Ferris feared he would have choked and bitten his companion.

“It’s all right,” McBride murmured as Ferris continued to suck at Bailey’s prick. “I should have told you to expect that. In the future, you will know to lift your hand from his balls and place it firmly around his shaft. Try it now.”

Ferris did even though Bailey wasn’t trying to feed him his length anymore. It was clear, though, that McBride was trying to make them good for each other, but it was also obvious he had never instructed a pair of untried lovers, either. Still, he was far more educational in one evening than all the years Ferris spent growing up in the thrall house. If he and Bailey took all his instructions to heart, they would become excellent lovers who would be able to anticipate their partner’s needs.

“Did I hurt him?” Bailey asked when Ferris finished sucking him and released his cock from his mouth.

“Not at all,” McBride reassured Bailey, who sounded horrified. “He just wasn’t expecting you to come so strongly. Frankly, neither was I.” McBride patted Ferris’s back. “You’ve pleased your companion well. Now he will give you the same.”