Heat Rating: Steamy
Word Count: 63,636
0 Ratings (0.0)
Contemporary Romantic Suspense
[BookStrand Romantic Suspense, HEA]
Guns and sex make Mary go round…
CIA agent Mary Reiss whirls with anxiety as she’s teamed with the man of her nightmares. She doesn’t need a man. She only needs her job. CIA agent Cal Guevin nearly got her killed, and she doesn’t want that option repeated.
Cal remembers the gunshot. He remembers the burning kiss. They were both perfect. The shot was meant to kill, yet he interfered and Mary lived. The kiss…the kiss left them to hide behind their badges until now. Apprehension builds as he needs to trust himself to save Mary again.
Agents Guevin and Reiss lead an operation in Cairo to infiltrate terrorists. The imminent danger reignites their fiery past, yet they have difficulty understanding each other’s idea of romance as they attempt to outmaneuver the deadly terrorists and double agents. With their identities leaked, they debate who to trust. Should they trust each other? Can they?
A BookStrand Mainstream Romance

More From From the CIA

The air of Cairo in mid-September suffocated foreign visitors. Much of the commonly found markets infused the air with tangy, musky scents, which wafted along with swirls of dust from the folds of tent awnings. From the airport, a cab which bordered on reckless careened through the crowded streets to a local hotel.

Inside, the hotel emulated others. It only required four walls, a bathroom, and a stiff bed. Didn’t matter what country or continent you visited. All hotels appeared the same after years of visits. A scarred door separated their sleeping quarters.

Cal threw his duffel bag onto the nightstand and proceeded to dress the part. He yanked on cotton, charcoal-colored pants and a common white top from the bag.  He made his habitual oath every time he began a new assignment. Protect your partner.

One time it hadn’t worked. He had been cleared of fault, but, damn it, that was his personal number one rule. His fingers slipped on the small buttons of his shirt as he heard a knock on the adjoining door. His last thought about this particular partner remained unfinished.

Before he answered, the door glided open. Mary didn’t wait for a greeting, and hurriedly said, “I think we need to get something straight before we even begin to work together again.” He stopped buttoning his shirt and watched her stare flicker over his bare chest and return to his eyes. It was not possible that her thoughts were entirely on business. “I know you think I won’t be able to keep the past from affecting my work, but you’re wrong.”

Cal waited for more. Nothing. “Can I finish getting dressed?”

She glanced furtively back at his chest and ignored his question. “What happened, or nearly happened, last time was a mistake. I can do my job and I’ll trust you’ll do yours.” She remained in position by the door. Was she taking partial blame for getting shot? The media had blamed him. Or was she referring to the kiss? Those things happen when in close quarters for too long.

If only it would happen again. Cal had refused a previous assignment with her because he feared his own ability to keep her safe.  He hadn’t kept  safe the one woman he found attractive inside and out.  That had been his first mistake.  The second mistake, well, funny how one kiss could change everything.

His fingers slowly maneuvered the buttons in place. Then he spoke. “This is a high-risk assignment, especially the part you’ll be playing. The other agents will be in the vicinity, but I’m the one who will get you inside the Hidden House and be at your back.”

“Understood. That’s the second time you informed me.” She pulled the azure scarf around her head and folded it to cover her neck. “I’ll do my part.”

Back to business. “At the reception tonight, I’ll introduce you to Roman Chenzira. He’s the leader of the Hidden House. He’s expecting me, but not you.” Mary furrowed her brow. “You’ll need him interested in the way you look, the way you carry yourself, and your brains. Use the information you read on the flight to engage in discussion. The tricky part is that he needs to want you for the whole package, not just parts.” This time he allowed his gaze to examine the tight evening dress that covered everything but her curves. He held his tongue on his wandering thoughts.

Mary shrugged. “How hard can that be?” She leaned against the doorjamb, letting her hip swing out to accentuate the curve of her waist. Her stare demanded an intelligent response.

Cal squinted and took a breath before he looked into her clear brown eyes. He needed her full attention. “It won’t be hard for you. Risky, but I won’t let it go that far.” Noticing his heart race and drive the blood to his groin, he added, “We just need the name of his arms supplier. The other team will take care of the rest. Chenzira needs to want to see you again, but keep it in open spaces. Don’t let doors close you off.”

“I know that. Then you can’t save me.” She dropped the edge of the scarf still between her slender fingers and whipped around to leave his room.

Cal closed the space between them, grabbing her forearm. “Mary, Agent Reiss, that’s not what I meant. Sorry, I know you’re aware of your part.” She stopped, her back to him. He breathed deeply. “Where’re you hiding your gun?”

“It’s strapped to my inner thigh. It’s high enough. No one will see it.”

He imagined his gun between her legs. Gritting his teeth, he leaned over her shoulder and relaxed his grip. Her exotic scent of patchouli teased as a strand of her silky, dark hair feathered his cheek. He wanted to turn her and consume her lips, her body, and feel what he had run away from too many years ago. It didn’t help that she had given him the cold shoulder. Of course, that was after she had already turned his mind into mush for her. His conscience interrupted, telling him to back off. Too close and he might not be able to protect her. 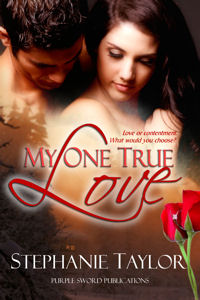 My One True Love
Stephanie Taylor
In Shelf
$0.99

Adored by Her Tiger Cowboys (MFM)
Em Ashcroft
In Shelf
$5.50
Tweets by
sirenbookstrand