George has been searching for a way to predict tornados that mimics her inherent ability. Her encounter with a handsome cowboy that drives away a twister has her stumped.

Wyatt and Landon are Storm Riders assigned to wrangle cyclones. When they both meet George, they’re driven to possess her, even offering themselves to her for a wild, stormy night of passion. When their boss, Raul, gets wind of this, he demands they cease all contact. Neither Wyatt nor Landon can stand to think she won’t be part of their lives.

She’s turned their world upside down and each craves George’s touch. Will Landon and Wyatt get to keep her? Or will Raul separate them forever? 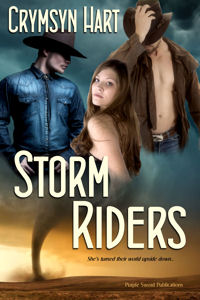 “We have to get out of here.” Jeremy clasped the door handle trying to escape, but the horse blocked his path.

“There’s no time,” she said feeling his panic. The cloud would be on them in minutes, and they didn’t have anywhere to go. The horse reared and leapt over the van. She didn’t get much of a look at the man, but saw he wore a black cowboy hat and a long duster. For some odd reason, his jacket wasn’t billowing in the gale. She watched in fascination as the rider went full gallop at the storm.

“What the hell is he doing? That’s suicide!” Jeremy cried. He tried to scramble over the seat, but she grabbed his hand and squeezed, not taking her eyes from the mysterious rider.

“There’s nothing we can do. It’s his funeral.” The cowboy stopped right in front of the funnel cloud, almost challenging it. The man turned, gave her a wry smile, and winked. Her jaw dropped. This isn’t happening. He should be swept up by the storm. He turned back around, reared his horse and held up his hand at the exact moment the twister should have swallowed him whole. Instead, the cyclone stalled, and died.

There’s no explanation for that. It doesn’t work that way. The wind dissipated, and the sky cleared. She slipped outside the van and headed toward the mysterious rider, but he had vanished with the tornado.

She glanced up in the direction of Jeremy’s finger. A flash of silver fluttered down toward them. It was their weather balloon, or at least part of it, and miraculously some of the instruments remained intact. She walked over to where the cowboy had been, following the road, and sure enough, there were hoof prints in the dirt.

“What the hell is going on?” She ran her fingers over the impressions. “Both of them should’ve been killed.”

Jeremy came running up to her. “I got the balloon or what’s left of it.”

“Great? That’s all you can say after what just happened? Woo! And did you see that guy? Where did he go?”

She stood up and dusted herself off. “I don’t know where he went, but let’s get out of here. We got what we came for. Let’s go back and analyze the data. Hopefully, it’s what we need.”

Jeremy hugged the balloon. “Don’t you want to know what happened to him?”

George stared back up at the clearing sky. Something about the encounter was all too familiar. It struck a chord deep within and tugged on the back of her consciousness. She shook her head. “No, I don’t care. Whatever it was, it’s over with. So are the storms. There won’t be any more today. Come on. Let’s get this back to the lab.”

Her assistant sighed but didn’t argue. They both climbed into the van. On the drive back, George ran the encounter over and over again in her mind but couldn’t come up with a rational explanation for the rider. Her mind tried to dismiss the event as something from her imagination, but in the morning light, she knew what she saw was not some illusion. Jeremy had seen the horse and black-clad cowboy stand before the storm.

It had to be real. It just had to be. It wasn’t my imagination. The cowboy had been there.

Theirs to Share (MFMM)
Lexie Davis
In Shelf
$4.50
Tweets by
sirenbookstrand