The Haunt of the Wolves 2

The Haunt of the Wolves 2

More From The Haunt of the Wolves

The rain lashed at Evie’s face as she exited her car, hitting her cheeks like pinpricks, and she turned away, causing her hair to blow into her eyes. Irritated, she swiped it away with a growl.

Like members of her wolf family, she abhorred storms. It didn’t matter when she was in her wolf self as her fur was thick and waterproof, but when it was turning into a gale like this one was, she instinctively wanted to find her fellow wolves and curl up under the pines, noses tucked in, sharing heat, staying safe.

Instead she was in her human form about to visit Jace.

Things had gotten better with Stefan. In the last week, he had worked hard to refresh her submissive training, and it had been successful. She seemed to have gotten past her fears. In the meantime, he was somehow gentler than he had been before, more caring. It was a welcome surprise. Evie wondered if it was because of the attack or because he feared her leaving him for Jace.

But whether to marry him or not was still up in the air, and she knew he desperately wanted an answer from her. He had even gone as far as telling her that he would take no other submissives if she was his mate as well as his sub.

“Really?” She had been skeptical.

He had cupped her face. “If that’s what it takes for you to be my mate.”

Evie believed him, but somehow, her past jealousies didn’t matter that much—except Brenda. She would always be the thorn in Evie’s side. The issue instead was which of her lovers she would miss more if she had to give one up. That was why she was now standing outside Jace’s front door—to make a decision one way or another.

Meanwhile, part of her was apprehensive that Jace wouldn’t want to see her or his leave was about to come to an end. She wondered if she had told him she loved him when they’d been together if it would have made a difference.

The wind changed direction at that moment, and a huge gust blew her forward just as Jace opened the door. Bracing herself for hard wood, instead she landed in a pair of soft arms. A welcoming embrace, she thought. Or maybe that was just wishful thinking.

“Whatever are you doing out here, Evie? For God’s sake, come on in.”

He ushered her inside and then struggled to close the door against the wind before turning around to face her.

Evie didn’t say a word, just drank in the gorgeous sight of him. His dark hair glittering with raindrops, eyes that seemed confused, yet pleased to see her.

“It’s hell out there!” He smiled and shook his head to rid himself of the water in his hair.

Her heart fluttered. It was such a wolf thing to do, she had to remind herself that he was human.

Clearing her throat, she finally responded. “It certainly is.”

Jace stood for a moment. “Um, as much as it’s wonderful to see you, Evie, why are you here?”

Evie shrugged. “I missed you,” she said in a quiet voice.

He thumbed over his shoulder, indicating outside, and grimaced. “And is the big guy, Mr. Rock-hard-muscles-who-will-smash-me-to-pieces-or-tear-me-limb-from-limb, gonna turn up next?”

She chuckled at his description of Stefan. Poor Jace had yet to see Stefan’s softer side. “Probably not.”

Jace lifted an eyebrow. “I was hoping it would be a ‘definitely not.’ I adore that you are here, but I also value my life, sweetheart.”

Closing her eyes, she bowed her head, trying to blink back tears. She had to make a decision. And make it now. Stefan or Jace? Rough or smooth? Dominant or submissive? Werewolf or human?

Standing up, Stefan used his feet to tap Evie’s ankles, indicating he wanted her to widen her legs further so he could get up close. Clasping her butt cheeks in both hands he fondled them hard as if he was giving her a massage.

“I think it’s time I took my own reward. Let’s see, what shall it be? Some cock sucking? Hmmm. I’ve always thought you are far too much in control when we do that, my young submissive. No, I need to be deep inside you. The question is shall it be pussy or ass?”

Stefan grinned over to Rafe, who was watching everything with relish.

“What d’ya reckon, Rafe? What would you have?”

Briefly considering this, Stefan then made up his mind.

Her trembling voice indicated her slight fear. “Both?”

She was probably thinking he was going to invite someone else to join them. But not on this occasion.

“Yep. You’ll see what I have in mind. But let’s start off with the lovely moist pussy that I can feel. Oh yes.” Stefan slipped on a condom, always a necessity as he’d often played with several subs in the past. Easing his cock inside her vagina, he felt her inner muscles clenching around him. It almost made her too tight.

Stroking the small of her back, he stood still a few seconds waiting for her to un-tense. There were times when he loved thrusting hard up her, but this wasn’t the occasion. She wasn’t relaxed enough.

After he felt her tension decrease as her body settled down on the table, he started small plunges, in and out, increasing the depth each time when Evie’s body started to tremble, and she moaned.

Grinning at Rafe over her head, Stefan suddenly pulled completely out, the tip of his cock quivering at the entrance to her pussy, almost with a mind of its own, eager to get back inside her lovely moist warmth.

He chuckled. “Always so impatient, little sub. There’s more to come.” Waving a hand at Rafe, he requested, “Hand me that beer bottle.”

Stefan saw Evie try to turn her head to see what he was doing. Rafe held her too tightly with his other hand. She’ll see.

But he knew he needed to say something. Stefan was worried she would start panicking again, and in front of everyone.

“We’re going for double penetration. You’ve had me inside you before with a plug in your butt. It’s time for a bottle.”

Rafe frowned at him. “Isn’t it rather, well, unhygienic?”

He raised his eyes to the ceiling, and tipping his head back, he drank down the last of the beer, emptying the bottle. “It’s not long come out of the cooler. So it’s clean, if a little cool. Besides which, she is used to my saliva around her butt.” Stefan placed the side of the bottle on Evie’s butt.

“Youch!” Evie’s scream resounded around the room, and several alphas chortled, while the subs who were watching seemed glad it wasn’t them.

“Just getting you used to the cold, my love. You’ve had ice inside you before. This won’t be that bad. All right?”

She was silent for a moment, and Stefan waited. She would say yes. He knew her too well.

Stefan’s intention was never to insert the whole bottle. He was content for just the top of the neck to go into Evie’s backside, and then he rested the flat end against his stomach muscles, wincing a little at the cold. Taking her hips in both of his large hands, Stefan pushed forward, pressing the bottle into her backside while his cock went into her lovely welcoming wet pussy.

When she started crying, “Yes, yes, yes. Oh God, more,” as her body started bucking beneath him, Stefan knew he had his submissive back. 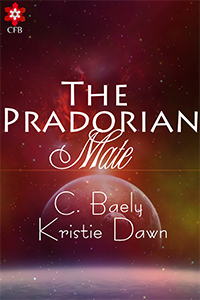