As the general manager of a ménage retreat ranch, it's Barrett Gideon's job to make sure everyone leaves the ranch with a smile. When sexy Sarah Emerson visits the ranch looking for a weekend partner or two, Barrett pins Sarah and invites his cousin, Chris, to complete the TRIO. Together they take Sarah to new heights, fully intending to leave her at the end of the weekend as they do every guest. But the boys didn't count on Sarah attaching herself to their souls, just as much as Sarah didn't plan to fall in love with the surly duo. When a thief sets his sights on the ranch, the Gideons are too late to stop him. Sarah asks her big brother for help getting the Gideons their money back. Norris Emerson and Amber Dalton return from Riding Cowboys to help Sarah and the Gideons pull off the ultimate con.

Note: There is no sexual relationship or touching for titillation between or among cousins.

Heat Rating: Sextreme
Word Count: 69,064
26 Ratings (4.3)
Contemporary Menage a Trois/Quatre Western/Cowboys
In Bookshelf
In Cart
In Wish List
Available formats
PDF
HTML
Mobi
ePub
Cover Art by Eve Adams
Reviews
Excellent read
Jlg29
Another fantastic book by Eve Adams, and another great start to new series. I love that Eve Adams writes series and always brings characters back from her previous books, as she did here. I loved Riding Cowboys and two of the three main characters from that book are back in this one! Amber and Norris, how I've missed you! And to meet Norris's little sister, Sarah, makes me fall in love with the entire Emerson family. Barrett and his cousin, Chris, were a perfect match for the feisty Sarah. Together the three of them made this story one I'll read again and again. I don't want to spoil anything, but there is a scene in the kitchen...with a carrot... Eve Adams, you've done it again. When is Temptation coming out!?! I can't wait.
mnage_lvr
Read more...
Professional Reviews

4 DELIGHTFUL DIVAS: "Eve Adams' Trio: Gideon's Ring 1 is hot, hot, hot! Sarah, Chris and Barrett heat up the pages after Sarah finds herself pinned by not just Barrett Gideon, but also his cousin Chris, for a weekend that promises great sex at the menage retreat ranch she decided to visit. Barrett, the eldest, and his brothers own the retreat ranch, but despite their popularity, they just can't seem to get ahead. As Barrett and Chris become closer to Sarah, they end up not only falling for her, but come to depend on her, especially after they get robbed and lose everything. Sarah is a great heroine. She is genuine, witty, sexy and like a lot of women, unaware of how she affects the opposite sex and a little insecure. Her character is very endearing. The hero's also have their own demons to get over. Barrett and Chris both have had their hearts broken, and even though they are described as gods, their pasts make them more human and more likeable as the story goes on. The story line is good. I look forward to reading the next in the series." -- Karyl, Dark Divas Reviews

She giggled and rocked her hips, pushing herself down against his hard erection. When she lowered her lips to his, she speared his mouth with her tongue and kissed him with a hunger that equaled, if not surpassed, his.

“Trust me, baby.” Chris ran his hands along her shoulders before sliding his hands underneath her thick coat. “You won't get an extra minute or two for anything but attending to your men.”

“Sounds good to me,” she breathed and then moaned. Chris must have found a nipple to pinch.

“You have no idea how hard you make me,” Barrett groaned as his lips wrenched from hers so he could attack her neck. They had on too many damn clothes for him to pinch her nipples, so how did Chris do it? He couldn’t even get to them.

She reached down and cupped the bulge between his legs. “I think I do.”

When she squeezed, he sucked in a breath. “No fair. I’m not wearing as many clothes as you are.”

“I believe he is,” Chris said. “Sarah, baby, put those sweet legs on either side of Barrett's. Let me have access to you.”

“I don't mind losing. In fact,” he paused as he unzipped his jeans and pulled out his cock, “I think I'd rather enjoy it.”

“No fair,” she whimpered and licked her lips.

“I’ll give you a chance to back out of this now.” Barrett lifted her so that she straddled him. Grinding his hips, he dug his fingers into her jeans to hold her exactly where he wanted her.

“Ditto.” She rocked her hips, seemingly unaware of the way he’d slipped his hand down and started to unbutton her jeans. She was too transfixed on the way Chris stroked his cock and made it hard in his hand.

“I'm going to sit here and tease you, my lovely Sarah. Watching me as I get harder and harder, so close to coming, is going to torture you. You want my cock in your mouth, don't you?”

“I want it in my pussy,” she breathed.

“Clothes stay on, remember?” Barrett reminded her of her own rule.

“I have to tell you,” Barrett stated as he rocked his hips and wedged his rock-hard bulge into the blistering heat between her legs. “You aren't doing a very good job in this challenge.”

“That's what you think.” She rocked her hips.

“I think the first thing I’ll have you do when I win is lie down on your back as I tie your wrists and ankles spread eagle.” Barrett nipped at her ear.

“I want to hear you beg for me to fuck you, Sarah. I plan to torture you, my dear, to tease you until you cry out in frustration.”

She squeezed and rubbed Barrett's erection through his jeans. “I’m already there, big boy. This plug is torture. And when I win, I plan to blindfold you so you can’t see what I’m doing.”

That sounded interesting. He bit at her neck. “Go on.”

“I’ll get you so close, on the verge of coming, and then I’ll pull back and wait.”

“Sounds like you’d be torturing yourself more than me,” he growled against her lips before thrusting his tongue into her mouth.

“I’d take that little remote away from you. I’d control when and where it went off. I may just have to take matters into my own hands if I get too hot.”

“Not on my watch, sweetheart.” He moved in.

Sarah met his kiss with demand and unrestrained hunger. She rocked her hips and made his job that much easier. He didn’t even have to do anything, she was that close to coming. The heat from her cunt had his cock so engorged he hurt. He smelled her arousal, and it drew him that much harder.

Carefully, he grinded his hips against her, releasing a button on her fly with each thrust. Not until he’d finished with the last button and slipped his hand inside her underwear did she let out a cry and look down.

Her words were cut off by a sharp inhale of breath as he pushed two fingers into the slick heat of her pussy. The wet, silken channel fisted his fingers, pulling him in further. He used his thumb to slowly tempt her clit.

“How’s that, baby? Does that feel good?”

“No fair,” she whimpered and rocked her hips against his hand, moving her body in counterpart to his.

“Come here.” He wrapped his free hand around her neck and pulled her lips to his, slanting against them and stabbing his tongue against hers in time with his fingers fucking her hole.

She moaned into his mouth and started to grind faster.

“That’s it, baby. Come for me. I love the way you scream when you come.”

“No problem.” Chris reached around and slipped his hand down the back of her jeans. She released a sharp cry. “It isn't too crowded in there, is it?”

What he did, he repeated, and she rocked against Barrett's hand faster. “You like that, baby? You like my finger joining that plug, don't you?”

He loved the way she whispered his name as she drove ever closer to her release. “Your pussy is growing tighter, slicker. You’re close, aren’t you, Sarah?”

“So fucking hot. You want to explode, don’t you? You want to come on my hand. Come on, baby. Come for me.”

She weaved her fingers into his hair and fisted it tight as she rocked harder, frantic in her need for release. “Oh, just like that. Chris, faster. Yes. Oh, Barrett. I’m coming. I’m coming!”

She screamed and threw her head back as juices flooded down her channel, coating his hand. His mouth watered. He wanted to taste her. He’d die if he didn’t get just one taste of that sweet nectar. 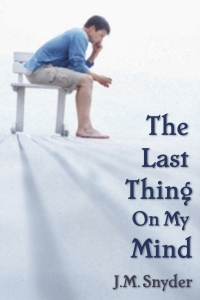