A confirmed bachelor, Cody realizes Marianne isn't the "love 'em and leave 'em" type he's used to entertaining in bed, and he's worried. Will she make him take a walk down the aisle if he confesses to his part of her fantasies? Can't they just be friends with benefits? His young deputy, Benny, seems to have found one in Phyleesha, but Benny's mother, Dulcie, has other things to say about the big city newcomer.

Will Cody be able to tell Marianne the truth about his involvement in her sleepwalking escapades? Will he survive the mysterious outbreak of cattle stampeding? And will he and Marianne discover beyond their fantasies true love prevails? A confirmed bachelor, Cody realizes Marianne isn't the "love 'em and leave 'em" type he's used to entertaining in bed, and he's worried. Will she make him take a walk down the aisle if he confesses to his part of her fantasies? Can't they just be friends with benefits? His young deputy, Benny, seems to have found one in Phyleesha, but Benny's mother, Dulcie, has other things to say about the big-city newcomer.

Will Cody be able to tell Marianne the truth about his involvement in her sleepwalking escapades? Will he survive the mysterious outbreak of cattle stampeding? And will he and Marianne discover beyond their fantasies true love prevails? 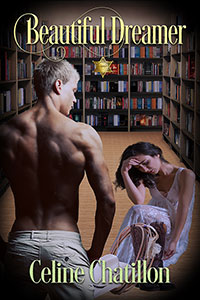 The call woke him from a fitful sleep. He slumped against the headboard and rubbed his eyes as he put down the phone. Starling County Sheriff Cody Greene was more than curious, more than concerned. He felt downright worried. It wasn't like Marianne Chalmers to be active all hours of the night.

It had been a long time since he enjoyed a full night's sleep—about as long as it had been since he had enjoyed the warm-bodied companionship of a female occupant in his bed. Wallowing in his own sorry problems wasn't important now. Marianne was.

He untangled himself from his mass of twisted sheets and headed straight for the shower. The tepid West Texas well water rinsed the sleep from his eyes, rolling down the taut muscles of his chest and past his hips, washing away at least part of the ache that seemed to perpetually linger in his groin.

Ten minutes earlier, Dulcie Garcia—Marianne's friend and assistant librarian—had phoned her son, Benny. Benny, Cody's right-hand man, knew what to do. He immediately called his boss with the news about Marianne's lights being on at two o'clock in the morning.

"Mom's been awfully worried about her." Benny stifled a yawn. "Yesterday she took Marianne over to that crazy quack healer in Crane. You know, the one who claims there's an herb for just about every ill that pains you, and I'm not talking about just innocent sage smudge sticks, either."

"Not sick sick, you know, but sort of finding it hard to sleep from what I understand," Benny explained. "That's why when Mom spotted the lights on at Marianne's place—while she was up enjoying her late night snack—she sort of wondered what was happening over there. She really got all worked up about it, too. You'd think aliens had kidnapped our county librarian the way Mom was going on."

"If aliens had kidnapped her then her lights wouldn't be on now, would they?" Cody snapped. A frown creased his forehead. "Keep away from the Marfa Lights on weekends, will ya, Benny? The FBI will never take you on if you keep on listing your hobby as Roswell Crash Incident Investigator."

"Thanks for the vote of confidence." There was a smile in the young deputy's voice as he added, "Sorry for waking you up, Old Man."

Ouch. Cody winced. That hurt. Being thirty-five wasn't exactly over-the-hill by any means. Or was it? His parents had been on his case about settling down and getting married only for the last five years or so, ever since they retired and moved on down to the Gulf to do a little fishing.

"No problemo, mi amigo," Cody said, rubbing his temples. "I apologize for being short with you there. This headache of mine doesn't seem to be going away."

Benny chuckled. "Are you sure the ache isn't a little lower than your head? I mean, it's been at least four months since Jolene left town. Maybe that medicine woman's got an herb to fix those kinds of problems as well."

Now there's a thought. Cody considered it for two whole seconds then pushed the idea aside. Cold showers and late nights working hard were all he needed to deal with his... tenseness problem.

"All right, wise guy," he told his deputy. "Try to keep your eyes open for a few more hours until I relieve you, okay?"

For the most part, Cody hadn't really minded being roused from his bed when it came to the Starling County's head librarian. After all, he was the area's chief law enforcement official and had every right to know just what was happening and why in his jurisdiction. Besides, he and Marianne went back, way back, all the way back to Starling County High. She had been valedictorian of the class behind him, and he, the star quarterback of the six-man football team of the state champion Starling Mustangs. Marianne had been as quiet as a library during finals week and as fragile as a piece of Taos black pottery back then, too.

Cody jumped out of the shower, quickly toweled off, pulled on his khaki police duds, stepped into his boots, and sleepily raked his fingers through his dampened, sun-streaked blond hair. Strapping on his holster, he re-checked his weapon and then attached his mobile phone to his belt.

It was a whole different world from the one his father had called home when he was sheriff back in the day. Now, if Cody or Benny ever got into trouble, a quick phone call could summon law enforcement from miles around, but this was still Starling County, population more or less three thousand souls in a fifty square mile radius. There were more prairie dogs than people in the county. Somehow, though, people still caused the majority of the problems.

Cody parked his four-wheel drive cruiser opposite of Marianne's sandstone bungalow and switched off the engine. An unusual chill in the dry desert air was made even eerier by the pale-blue glow of a near-to-bursting full moon.

The high plains of the Oil Patch weren't known for their cool nights in June, but, at two-twenty in the morning with the hint of a thunderstorm brewing in the Davis Mountains to the south, the weather was taking a much-needed break from the broiling heat of early summer. Squinting, Cody was able to make out the petite librarian's form ambling rapidly back and forth behind the sheer draperies of her front window.

Should he knock and politely say he happened to be passing by on patrol and wanted to check why her lights were on? It was bad enough Marianne's husband had been killed a little over a year ago in a freak oil rig accident. She didn't need any more trouble to contend with these days.

The Seduction of Cassidy Flint (MFM)
Samantha Lucas
In Shelf
$0.99