Callie Kirkland learned how to take care of herself without anyone’s help. But when she takes a dive into a trap, she has to rely on the aid of three sexy strangers. Werewolf brothers Blue, Raine, and Pete Deacon love their home and have no intention of leaving it, even to find their intended mate. But when they find a beautiful woman caught in a trap, they come to her rescue. Problem is, now that she’s found her way into The Hidden, they can’t let her leave even when she’s ready to risk her life to prove them wrong about the evil creatures called The Cursed. Will Callie gain a home only to lose it? Can the Deacon brothers help Callie without getting banished? Or will they have to sacrifice the only place they’d ever loved to keep her in their lives?

More From Mountain Men of Montana

Three huge wolves, their gazes hard and steellike, stared down at her. She hurried to her backpack and rummaged through it, hunting her knife. It wouldn’t do much good if all three attacked her, but at least she’d go down with a fight. She found the knife then backed toward the side of the pit that was farthest from them.

Even though her heart pounded in her ears, she couldn’t help but admire them. One was a golden color with shades of light brown covering his haunches. A white streak ran down his face to the end of his nose and tipped the ends of his ears. He stood like the other two, large paws planted apart as he swished his tail.

The one standing next to him had dark hair with lighter brown covering parts of his body then blending back into black before lightening again. He lacked the white accents and he was bigger, his chest wider than the first wolf’s.

The third broke apart from the trio to pace a few feet away. His fur was coal black with no variation in his coloring, making him a striking contrast to the other two wolves.

They were beautiful and majestic, a sight anyone would appreciate. But it was their eyes, locked so intently on her, that took her breath away. The amber in them shone in the darkness, but it wasn’t the color that had her gasping. Instead, it was the way they looked at her.

As she would’ve imagined, their eyes held a hunger. But she couldn’t help but think their hunger was not born from a lack of physical nourishment. No, the hunger was one of longing, like a child’s gaze when he presses his nose against a toy shop window and yearns for the bright, shiny toy beyond his reach.

The first wolf paced the other way and took a position at her back. Surrounded, she moved into the middle of the pit but again recognized the futility of any attempt to win if they decided to take her.

“Get out of here!” She held her knife up in what she hoped the animals would take as a threatening gesture. “Go on. Get! I’ll cut you if you try to hurt me.”

Were they grinning at her? She squinted, trying to see better even though a full moon spread its glow over the land.

Almost as if in challenge to her threat, the first wolf hunched down, then leapt across the hole to land next to his pack mate. She yelped, then hated herself for letting him scare her. Wasn’t it a good sign that he hadn’t jumped into the pit?

Her breathing hurt her throat as she dragged in air. She’d run across wild animals before and had either scared them off or gotten away from them. But this was different. She was vulnerable and caught in a trap with nowhere to run.

Still, she was surprised when the black wolf leapt into the hole and landed a few short feet away. Startled, she moved backward and stumbled over her backpack. She scrambled to her feet, taking her pack with her to hold in front of her.

For the first time ever, she wished she had a gun. But she’d never been able to stand the idea of shooting an animal.

The black wolf tilted his head at her as Scrunch had done. In fact, there were many similarities between Scrunch and the wolves. Almost bone-thin to the point of emaciation, Scrunch had resembled a wolf, albeit with a more human-like face. She shook her head, surprised that she could think of the strange creature while an attack was imminent. She prepared herself for the pain that would come with the first bite.

Instead, he lowered his head and inched forward. She clutched her pack to her chest and held out her knife. The wolf shook his head. Was he answering her threat?

When he sat down on his haunches, she was left speechless. In a matter of seconds, he’d transformed from a wild beast to a friendly animal. She lowered her hand, but she still clutched the knife.

They stayed that way for several minutes, eyeing one another, sizing each other up. The black wolf watched her as the two other wolves moved around the hole. But she didn’t sense any danger from them. Instead, they seemed as curious as she was.

He pulled back his lips. Damn it all. It’s not my imagination. He’s smiling at me.

She dropped her backpack and slid to the ground beside it. “I don’t know if I believe this, but I’m going to take full advantage of it anyway.”

Daring to put her knife on the ground, she pulled the flaps open and pulled out her camera. “At least if I’m going to end up as your dinner, there’ll be photographic evidence.” She lifted the camera and adjusted the settings. “Smile, big wolfie.”

She almost forgot to push the button when he did just that. Biting her lower lip, she clicked off more photos. With each successive picture, he shortened the distance between them. She fought against the fear stiffening her spine, determined to not let him stop her. Before long, he was less than a foot from her.

The growl rumbling out of his throat threw her off her game. Dragging in a long breath, she lowered the camera and found herself staring into the amber eyes of the wolf.

She should’ve insisted that they stop. She should’ve grabbed her clothes and dashed away. But it was too late. It had been too late from the moment she’d seen him and his brothers.

Can I have Raine and Blue, too?

The exhilarating idea gave her the courage to go on. She’d always been so careful, so responsible in anything to do with sex, but now he’d turned loose a part of her that she hadn’t even realized was caged. She smiled as she pictured a wild animal breaking free inside her. The image of a wolf with fur the color of her hair slashed through her mind and her smile grew wider.

If only that were real.

But that was ridiculous. How could that ever be? And yet, somewhere deep inside her, she thought she heard a howl.

She arched against him, urging him to take her. Cupping his bulging crotch, she closed her eyes and fumbled with his button. If she didn’t get his cock out soon, she’d explode with need.

She hadn’t made much progress in getting his jeans undone when he surprised her by dropping her back on the quilts. She opened her eyes to find him standing over her, hurriedly stripping his jeans off. He wore no underwear, and as soon as it was free of its constraints, his cock shot out, hard, long, and oozing pre-cum.

She swallowed and wondered if he was too big. Could she handle a man his size? Whether she could or not, she’d damn well do her best and try. She sat up and pulled off her top along with the sports bra she wore.

He inhaled, his focus intent on her breasts, and for the first time in her life, she worried that she wasn’t big enough or perky enough. But those fears soon left her as she took in his desire, his gaze skimming down her body, then up again to linger on her breasts before moving to her face.

Had he sensed her worry?

“Every damn inch of you is incredible.”

He tugged off his shirt and fell on top of her. His hands skimmed over her, along her legs, slipping to her inner thighs, then teasing her as he touched her pussy then moved over her stomach to take a breast. Bits of amber flashed in his eyes.

He pressed his mouth to hers again as she clenched his back. She concentrated on the hard, hot flesh searing her palms as she skimmed her hands over all the ridges and valleys of his body.

Pete gripped her harder, rubbing her clit and sinking his finger into her pussy until she wanted to scream at him to fuck her. Only his mouth on hers again stopped her cries. He lashed his tongue with hers, daring her to try and keep it in her mouth.

She was about to make good on her scream when he pulled back. He studied her, his finger still in her pussy, yet unmoving.

“Do you want me?” His voice was low to the point of changing his words into a growl.

She’d expected a chuckle, but he was too serious. His hand picked up a steady rhythm that nearly drove her insane. Her abdomen tightened. She tried to bring his mouth back to hers, but he shook free of her hold.

“What are you doing?” Her breathing was ragged, showing how much she was on the edge and needing him.

“I want to look at you. I want to remember the first time we’re together.”

A groan broke free and she hit him on the shoulder. A girl could only stand so much. “You can look at me later. Hell, stare at me all night if you want. But right now, I need you to fuck me.”

He flicked his tongue over her nipple all while keeping his eyes locked to hers. “What about foreplay?”

“Screw foreplay.” She grinned. “No. Better yet. Screw me.”

He chuckled, the rich sound flowing over her. “Yes, ma’am.”

She stared in horror at him and struck him again. “Don’t ever call me that again. You got that?”

“Don’t worry. I hated it the minute it left my mouth.”

“I want more than a damn picture for the rest of my life.”

She frowned, once again thrown. “The rest of your life? Ours? What are you two saying?” Her heart pounded. Had she known him longer, his words would’ve captured her heart. But it was too early, too unexpected for that kind of talk. As far as she planned, she’d probably never see him or his brothers after tomorrow.

Without warning, pain seared into her, putting a tight ring around her heart. She didn’t want to think about never seeing them again. But why? She didn’t know them. Denying the raging lust inside her, she shoved him back and fisted her hands on his chest. “We need to stop. I don’t understand—”

“Don’t take this the wrong way, but would you please shut up? Do you want me to fuck you or not?”

She started to open her mouth again then bit her lower lip and nodded instead. He pushed her on her back and shoved her legs apart with his. Gazing into her eyes, he thrust his cock into her. 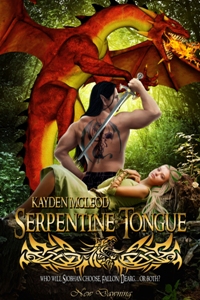