Metal sculptor Sloan Norris must work two full-time jobs in order to climb out of the financial hole he’s fallen into. This leaves him little time for romance, especially since his last boyfriend left him with a stack of his own bills. While working as a dealer at the casino in town, he finds himself charmed by a sexy Spanish guest who uses the cheesiest pickup lines ever heard to get his attention.

Banned from Europe for two generations, 233-year-old vampire Joe Dante meets his mate while vacationing at a casino in the mountains of North Carolina. His little human mate is working himself to death, so Joe steps in to save Sloan from himself as well as his abusive ex-boyfriend.

Will Sloan accept the position of being Joe’s mate? Will Joe agree to model for Sloan’s next sculpture? Will Sloan’s ex-boyfriend separate them permanently?

If he had not sworn the Hippocratic Oath to do no harm more than two hundred years before, Joseph Tomas Dante would have already staked himself.  But he had taken the oath, several years before he had become forever thirty-three. Back when he had been young and innocent and life had been a sacred thing to him. Back when he could stitch up a bleeding man without fighting his dark nature that wanted to sip at the blood.

Back before he became a vampire.

Joe had hung up his shingle several times during the last two centuries, but since the invention of computers and paper trails, it was no longer viable to practice medicine, no matter how up to date he stayed by reading medical journals and taking online classes in the latest healing techniques.

Six months ago, he had put his latest incarnation into effect as Joe Dante, online investment guru by day, and card shark by night. When a chain of casinos was looking for outside investors for a start-up on the Indian lands of Cherokee, North Carolina, he had bought a half interest, then walked away with the understanding that he would be an extremely silent partner.

Having most recently gambled and lived the high life all over Europe, he had come under the scrutiny of Interpol. There were rumors of him being an international assassin, a hitman for the Spanish mob, or a smuggler of some sort. After a particularly nasty meeting with the International Vampire Council, he was ordered to relocate to the States, keep his head down and his nose clean.

So, here he was, visiting the mountains of western North Carolina where there was little to no nightlife, except for the casino he had invested in when he had first arrived in the States ten years earlier.

As he had traveled and invented and tried to keep from staking himself, Joe remained always on the lookout for his mate. Having loved both men and women in the past, he did not care whether his mate was male or female. He was not picky, except that his mate would complete him.  The one person in the world who would accept him without feeling smothered by his intense brand of loving.

The person would love him back despite his vampiric differences.

Though he would prefer to find his mate, tonight he would settle for an evening with someone smart and funny. One who was not afraid of the dark, or of things that went bump in the night. One who would like to spend the night in his bed, and not be gone before daybreak.  If that person happened to be his mate and could turn his nearly forgotten libido on with his smile, then his life would be complete.

With twenty dollars in his pocket, Joe headed to the slot machines. They might be rigged to favor the house, but he knew the secrets to make the one-armed bandits give up their money. After all, he had been in on the invention of the damn things. Once he had a decent pile of winnings from the slot machines, he would move on to one of the tables, either blackjack or poker. Either way, at the end of the night, the local women’s shelter would receive his winnings for the new shelter they were raising funds to build. After all, he didn’t need the money. He had billions in banks all around the world earning more interest than he could spend in his next ten lifetimes.

Stopping midstride, Joe lifted his nose and sniffed. Then he sniffed again. Then he took a deep breath, filling his lungs as he dissected the scents. Apples and spice and male. His cock filled with excitement, which traveled up his body until his thinking brain caught up with his body.

Mate. Close by. Find him. Claim him. Keep him.

Turning in a slow circle, Joe sniffed again. When two ladies muttered something about cocaine and made a wide circle around him, he could only chuckle. The way he was acting, he probably did look like some crazy drughead. The spicy-sweet scent of his mate was coming from his left. Turning, he tried to follow it without looking suspicious, though it was difficult.

He almost lost his mate’s scent among the many others he had to sort through. Cologne, cleaning fluids, food from the restaurant, and body odor made picking out that one special scent difficult, but not impossible. It took him five endless minutes to track the cinnamon and apple scent to a blackjack table in the middle of the casino. Circling the table, he paused, trying to figure out which of the four women sitting at the table was his mate.

Still not able to pick her out, Joe moved closer on his second circuit around the table. On his third pass, he was close enough that the women all looked up from the table and watched him over their shoulders.

The small blond twink of a dealer stared into his eyes, appearing stunned for a moment, before slowly blinking. “Sir, you’re making the players nervous. Please, either step away from the table, or take a seat.” His voice was soft and husky. It reached down and grabbed at something deep inside Joe’s gut. Then the dealer turned his attention back to the women sitting in front of him.

Joe pulled one last deep breath. He pinpointed the scent as coming from the casino worker.

His mate was male.

He had to bite the inside of his cheek to keep from howling as his cock slammed to full erection. He had found his mate and the little man was looking at him as if he killed puppies. Somehow, Joe needed to change his perception and maybe make him smile just a little.

As he moved to the empty seat at the table, Joe smiled at him. “So, you come here often?”

Sloan pulled his legs from around Joe’s middle as he blinked back tears. The big man’s words and concern for his comfort touched him as nothing else ever had. None of his other lovers had been concerned about whether they hurt him in their mission to find their own pleasure. No one had worried about Sloan before.

Sitting up on the bed, he did not bother with more than the top two buttons on his shirt. After loosening the bolo tie, he pulled the shirt over his head and tossed it to the floor. He toed off his shoes as he watched Joe strip almost faster than his eyes could track. He had just opened his pants when Joe stepped up to the side of the bed.

His eyes were turning red as he grabbed the legs of Sloan’s pants and pulled them off in one quick move. Sloan shoved down his boxers, sitting up to push them off his feet. Then, his eyes taking in Joe’s entire body, Sloan slid off the bed and knelt on the floor in front of the man.

Before he could lick the head of Joe’s erect cock, to taste the essence that wet the head, he found himself flying, landing on his back in the center of the king-size bed. His breath whooshed out of his lungs when Joe followed him down, landing half on top of him.

Looking up into Joe’s eyes, he could see red bleeding into them. “Ummm, Joe?” he asked, though he really wasn’t sure this was the time for such a conversation.

“Mmmm?” Joe responded even as he began to nuzzle at Sloan’s neck just below his ear. He slowly worked his way down to the base of his neck, licking and nipping at his skin.

The touch of his lips against his skin, and the scent of spice and healthy male that was all Joe, sent Sloan’s worries skittering out of reach until all he could think of was being one with the man. Instead of asking the question that had seemed so important a moment ago, Sloan tilted his head, allowing Joe better access to the skin he seemed determined to lick and suck at.

“I need you, cielito,” Joe whispered as he pushed his cock into Sloan’s hip while licking at a spot where his neck and shoulder met. “I need to claim you now.”

He hoped he would not regret this when he woke up alone one day. He knew for certain that Joe would, one day, wake up realizing how bad a deal he had gotten in this mate business. For now, he would accept whatever the man would give him. He could not hold back the whine of disappointment when Joe rolled away.

“Shhhh, baby. We need lube,” Joe ground out as he opened the drawer in the nightstand and fumbled around inside. A moment later, he returned, a triumphant expression on his face. “Got it.”

Not knowing exactly what Joe wanted, Sloan tried to relax so the man could move his body wherever he wished. By the intense expression in his eyes, Joe was on the edge of something big, and Sloan had a feeling the wrong move on his part would send the man tumbling over the edge of his control.

Joe pulled Sloan over to sprawl across his chest, then pulled the man’s legs so his knees were bent and resting on the bed beside Joe’s chest. A moment later, a cold, wet finger brushed over his hole with an accuracy that had Sloan sucking a breath. He relaxed and pushed back as a finger slid through the opening and began to stretch the guarding muscles.

Sloan nuzzled wherever he could, licking and lapping at the cool damp skin, needing more. So much more. “Hurry,” he encouraged as Joe pulled the single digit out and replaced it with two.

“Shhhh, my treasure. I will not rush this. No matter how much I want to slam into you and claim you as my own, I do not wish to see you in pain.”

Sloan knew preparing was for the best because Joe was a large man in every respect, but his body wanted to be one with him as soon as possible, discomfort be damned. He could not stop himself from wiggling and shimmying and trying to impale himself even further on Joe’s fingers.

When a third finger joined the first two, Sloan froze at the burning twinge of pain that radiated from where his muscles stretched further than they had in quite a while. “Please, Joe,” he begged, “fuck me now.” 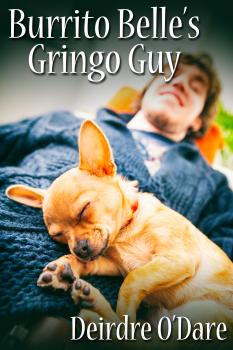