Framed, unable to investigate the crime she has been accused of and clear her name, Dalia stands trial and receives four life sentences without parole. However, the new leader on Xydlan has requested her extradition and by order of Earth’s leader, General Karreman, the judge agrees.

Taken into custody by the Xydlanians, she is resigned to her fate. There will be no trial on Xydlan, of that she is sure. Will they behead her? Send her to the pyre? Her life has come to an end. There is no hope left.

The night before departing for Xydlan, a sound wakes her, and two figures come to her assistance. Two men with heads like dogs. Dalia is sure she’s already been executed, and she’s entered the afterlife. She is going to face her final judgement… 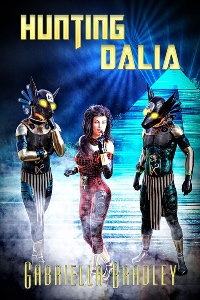 One of the agents quickly cuffed her. “Dalia Ramadan, you are under arrest for the murder of President Ovo’khan, his chauffeur, and agents Johnson and Herchensen. You have the right to remain silent. Anything you say can be used against you in court. You have the right to have a lawyer present during questioning. If you cannot afford a lawyer, one will be provided for you if you wish.”

Dalia knew the spiel. She’d recited the words many times in the line of duty.

The second agent took her shopping bag and her purse and removed her comm while the other frisked her for her weapon, but she’d left that in her vehicle. Then they led her to the interrogation room, cuffed her to a chair, and left her sitting alone.

Dalia’s head was spinning with disbelief. They were all out of their minds. Really now. If she were guilty, would she blatantly have walked right into the offices of the UBI and into their hands? Were they that stupid?

The door opened, and Director Tom Clayton came in. He stood at the table and stared at her.

“Tom, for God’s sake, end this? You’ve known me my whole life. I’m no killer. What unearthly reason would I have to assassinate the president?”

Tom Clayton and her father had been close friends from when they were young and stationed in Egypt. Both had been undercover agents and partners for the Egyptian division of the UBI. After her father was killed in the line of duty, Tom was offered the position of director of the New York division and had left Egypt with his family. Dalia’s mother, alone and unhappy, had decided to leave Egypt and return to her homeland. Because she was best friends with Tom’s wife, she and Dalia had settled in a suburb of New York. Dalia had been twelve at the time.

Tom frowned. “All the evidence is against you, Dalia. I find it difficult to believe, but facts are facts. Unless my eyes deceive me, you shot and killed four men in cold blood.”

Dalia snickered. “Give me one good reason why I would commit such a crime? It’s insane.”

“That’s why I wanted to talk to you first.” He sat on the chair opposite her. “Would you like a coffee? Want me to call a lawyer?”

“No thanks to coffee. And yes, if you can’t put a stop to this madness, please get me a lawyer.”

“Why, when you came here a little over an hour and a half ago, did you run? And to make it worse, you are wearing different clothes,” he said. “Surveillance shows you wearing a blue suit before you ran. Who warned you?”

“Earlier when I was here, I was about to knock on your door when someone alerted me. As to who warned me that I was about to get arrested for murder, it doesn’t matter. But it blew my mind, and I didn’t think straight. I shouldn’t have run. I’m innocent, Tom. That’s why I came back.”

“The recording is heavily doctored. Think about it. The disc magically appears after two days?”

“We have two phasers with your fingerprints all over them, and the recording clearly shows you firing your weapons at the president and his men.” Tom heaved a big sigh. “Honey, I don’t want to believe any of it, but I’m afraid you’ll have a hard time proving that you’re innocent. The fact that you’re from Egypt and your father was Egyptian doesn’t help your case.”

Dalia chortled. “Right, I’m considered to be Arabian because I was born in Egypt and that instantly makes me a terrorist. Damn, my mother is American. That means I’m half American, and I’ve got dual citizenship. And my father, though he was born in Egypt, was an American citizen. He lived in the USA since he was a boy, and he and Mom got married just before getting posted in Egypt. You very well know all that. Just because I was born in Egypt, too, doesn’t make me an Arab.” She took a deep breath. “And for your information, I only carry one pistol.”

“The one found near the body was also bureau issue, and records show you requesting an additional weapon the day before the assassination. Agent Bell will be here shortly to interrogate you. Because Harriet and I are close friends with your mother, I can’t be involved. I suggest you are completely transparent. Tell Bell the truth. Meanwhile, for the sake of my friendship with your dear departed father and for your mother, I’ll do everything I can to help you.”

“What do you think Dad would have said about all this?” Dalia smiled contemptuously.

“Honey, I don’t know how I can help you except to be supportive and stand by you and your mother.”

“I guess I’ll need that promised lawyer. When I’m out on bail, after the arraignment, I’ll be free until a possible trial, and I’ll spend night and day investigating the case. I’ll prove my innocence before it even has a chance to go to trial. Pity that phasers don’t fire bullets. At least those could be matched to weapons.”

“Honey, I have to take your badge. The weapon that was in your car has been confiscated as well. And when you’re out on bail, I suggest you leave the investigation to us. If you interfere, it would be bad for you, and your bail could be revoked.”

“Before anything, I want to see that surveillance footage,” Dalia demanded. “I have that right.”

“Ask Bell. Be honest. That’s the best advice I can give you.”

The door opened, and Agent Bell came in. He nodded a greeting at Tom and waited for the older man to leave the interrogation room. He took the vacant chair, placed a folder on the table, and started a recorder. “Ready? Let’s begin.”

“Not until my lawyer is here,” Dalia snapped. There was no way in hell she’d say another word until she had legal representation.