Charanda Meyers celebrates her victory of passing her exams at the space academy and becoming a licensed pilot. Out at a bar celebrating with her two best friends, Susan and Peter, they test her with the ultimate dare.

Never in Charanda’s wildest dreams had she imagined that her first solo flight would become such an adventure—an escapade that would cost her dearly.

Neither had she counted on an unexpected passenger—one who tried to capture her heart. But she has other plans than committing to a relationship. 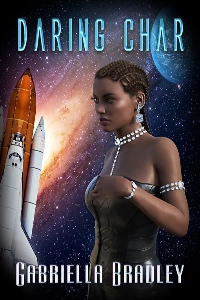 Thousands of people waited outside the supreme court, all hoping for a chance to attend the biggest court case of the century. A row of guards stood on the steps and between the pillars, desperately trying to hold the pushing and shoving crowd back.

The main courtroom was jam-packed, the people whispering and talking about what had just taken place. Reporters jockeyed for position, trying to snap pictures of the empty witness chair and the cuffs lying abandoned on the floor next to the seat.

The courtroom was way overcrowded. The room’s capacity strained with all the people seated, as well as standing. Several court officers guarded the double-door entry in case the crowd outside tried to push their way in. Never in history had there been a case as notorious as this one. The theft of a spaceship was unheard of, and to make matters more interesting, the president had recently purchased the ship for his personal use.

The noise finally quietened down after the judge brought his gavel down several more times. “Now that you can all hear me... It appears I am not the only one losing my mind! Did we all see the accused disappear in a mere second?” He directed his attention to the court officers and guards. “Lock all doors and search the courtroom for the female Houdini prisoner,” he ordered. “No one leaves this room until the thief has been found.”

Charanda giggled inwardly. Escape was simple now. She could have tried to escape from her jail cell, but this way was much easier.

She’d been treated as if she was the most dangerous criminal in history, stuck in lockdown, and not even allowed out for daily exercise. All her meals had been delivered to her cell, so it was not easy to find a suitable bug to shift into. The only insect she had seen while in her cell was one lonely ant, and turning into one of those would be playing with her life. Ants were too easily stomped on by relentless boots.

When the judge allowed people to leave, she would just follow the crowd and fly out of the city to the nearest forest. Of course, she had taken a big chance in hoping there would be a stray fly or bug in the courtroom, even a cockroach. Although something that could fly was always preferable. A cockroach was bigger than an ant but still too easily stepped on by unforgiving shoes. Her only other option would have been to shift into one of the guards or a spectator. But that could have been dangerous to suddenly appear as someone’s twin.

No one knew, or almost no one, that she was a shapeshifter who could morph into virtually any living insect, animal, or another human in less than a second. So fast, it was undetectable to the human eye. One moment she had been sitting in the witness chair, the next, all that was left were her shackles.

The prosecutor had been about to question her when she’d spotted the moth on the ceiling, so she’d concentrated on it and instantly morphed. No one had noticed the small insect flying to the wall behind the judge. After that, she witnessed everything that happened. Had she been in her human body, she would have roared with laughter.

The prosecutor and his team were left standing with their mouths hanging open. Her court-appointed lawyer had jumped up, his expression... priceless. The man was useless anyway.

Her grandfather had been allowed one five-minute visit and told her he planned to retain the best lawyer he could find. But for some weird reason, the court wouldn’t allow it. She had questioned the useless lawyer about that, and he had merely shrugged his shoulders, saying it was by order of the president that he took her case.

Though the spectators were quiet now, tablets pinged, and reporters’ fingers flew over their tiny keyboards to send the news out. Some of them were even able to sneak out a picture of the empty witness stand and still locked abandoned shackles.

She flapped her wings a few times and landed above the double doors, ready to fly out with the departing crowd when the judge gave the okay for them to leave. But the search for her was on. The courtroom had become a madhouse, with people looking beneath the benches, anywhere and everywhere. It would be a while before the guards would be given permission to open the doors and let everyone go. While she waited impatiently, her mind drifted back to how and when she became Daring Char, a space pirate, six and a half years ago.

“I dare you,” Susan and Peter shouted simultaneously.

Charanda ignored the curious glances thrown at them by other students. She pinched her nostrils and downed the shot of whiskey, then quickly guzzled half a glass of beer. Raising her eyebrows, she looked at her two friends. “Tell the whole world, why don’t you. Look at everyone staring at us. You’re out of your friggin’ minds. Like I would risk my career to go on a space joyride in the middle of the night. Or... you’re just fucking stupid drunk and don’t know what you’re saying.”

“Most of them are just plain fucking jealous of us because they failed and have to do another year, if not more.” Peter primped and grinned widely.