Octalia Trevarto, a Fey descendant of a goddess, returns from a fishing trip to find her village in flames, under attack by the king’s soldiers. She feels helpless, powerless to prevent the utter destruction wrought by a king who has vowed to destroy Fey, dragons, any citizens with special abilities. As a lone survivor, she decides that hiding right under the nose of her enemy is a better option than fleeing further into the forest. She does not foresee the consequences of her actions.

Octalia wakes in a clinical room to discover she has become the test subject of two scientists for a transplant experiment. And she is not alone… There is another patient. A man she feels instantly drawn to, but who is he? 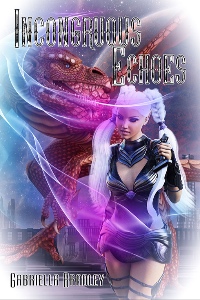 Octalia struggled from what seemed to be a very dark tunnel. Her eyelids felt heavy, her eyes as if they had a bucket of sand in them. “Where am I?” she whispered and tried to lift her arm but could not.

It took a while before she could focus on her surroundings. Her vision cleared, and she took in the small, clinical room—white walls, no window, and there were medical monitors next to her. Again, she tried to raise her arm, but it was no use. She then realized her wrists were in restraints and strapped to the bedrail.

Summoning her magic, she attempted to break the leather bands, but to no avail. What was wrong? Why did her magic not work? Magic? What magic?

A sharp pain shot through her brain, causing her to close her eyes, and she groaned softly at the confusing thoughts tumbling through her mind. Memories she knew nothing of—visions of a farm, animals, fields of vegetables. A name kept echoing—Anjanina…Anjanina…Anjanina… She knew no one with that name.

A click. Octalia turned toward the sound and saw a man dressed in a white bodysuit enter the room. “Who are you? Where am I?”

“I am glad to see you are awake. What do you remember? Do you recall your accident?” The man asked.

A woman, also dressed in a white bodysuit, came in and stood beside the man. “No memories of her own?” the woman asked the man.

“She only just woke up. Not so far. Too early to tell.”

The man shone a light in Octalia’s eyes, causing her to yank her head away. “That hurts.”

“The light hurts your eyes?”

“Yes. I have sharp pains shooting through my head. Who are you? What happened to me?” she asked.

The female answered her. “Two men attacked you. You suffered a traumatic head injury—a fractured skull and intracranial injuries. If my partner had not found you and brought you here, you would have died. You are recovering from surgery.”

“Yes, we both are. You are in the clinic of our research facility. I am Doctor Lareviun, and this is Doctor Londo Granet, my partner. We are scientists. What do you remember, my dear? Do you know your name?” the female doctor asked.

“My name is…my name…is…” She had to think hard. The concentration hurt, but then suddenly, it came to her. “Octalia Trevarto.”

The female doctor looked excited. “She can talk and remembers her name. I wonder if that is hers or the donor’s name.”

What is she talking about? Donor?

“What do you mean? Everything is very vague, and my head hurts.”

“You need to rest. Go back to sleep. When you wake, the pain should be gone,” the male doctor told her.

At this point, she could not remember either of their names.

The two doctors left the room, talking to each other, but Octalia fought her drowsiness. Her mind kept trying to sort through memory fragments, attempting to process everything. That, and she was uncomfortable at not being able to move her arms or legs.