Julie’s dream of owning her own house becomes a reality. When she tells her longtime boyfriend that she’s bought an old, haunted mansion, he’s not impressed with her purchase of what he calls a dump. Realizing that what she feels for Brian isn’t true love, Julie tells him they need to take a break from each other.

The manor was originally built in the eighteen hundreds by three friends who mysteriously disappeared. Julie is quite intrigued with its history and decides to do more research once she moves in. As an agent for several bestselling authors, she feels there could be a story hiding within its walls that would inspire one of them.

Little does she know what she’ll discover in its cellars. Or that the Christmas Eve party she’s planned for after the renovations are completed will have the strangest ending. 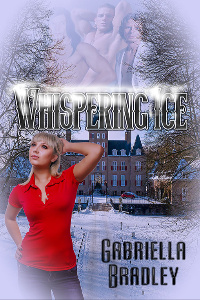 “I’ll help you move into that dump and stupid little township.”

“Brian, it’s not a dump. It’s a very old historical house and unique. You should see it inside. All the floors are hardwood, and it comes fully furnished. The setting is so picturesque amidst all those trees.”

“So why was it so dirt cheap?”

“The realtor said it’s haunted. The original owner disappeared mysteriously years and years ago. After he was declared dead, it went to some distant relatives. They sold it. Since then, it’s been sold five times, and none of the buyers lasted more than a month.”

“And you think you will?”

“I don’t believe in ghosts.”

“Don’t you think it’s rather odd that five buyers couldn’t last more than a month? And how long has it been sitting empty?”

“The last buyer moved out after just weeks. He put it up for sale but then pulled it off the market. That happened about fifty years ago. He died and left it to a distant cousin who lived there for a little while. Since the cousin moved out, no one has occupied it. Then the cousin passed away and didn’t have family or a will, so it became an estate sale. It only went back on the market a few months ago after a lengthy search for any surviving relatives.”

“You’ll find a mountain of dust and cobwebs, I bet.”

“Actually, no. They must have hired someone to look after it all those years that it sat empty. It’s been very well kept, and maybe the realtor had it cleaned. Who knows?”

“How long did you take off work?”

“Since I’m my own boss, it doesn’t really matter now, does it? But I planned for three months. I’m well caught up and even ahead of schedule, so there’s no rush to get back to work.”

Brian grunted. “Oh well. You made up your mind and signed off on the deal, so it’s too late. You’ll just have to learn a lesson the hard way. It’s your money. You can always sell when you find out that country living isn’t for you. Or when the ghosts chase you out. When do you move in?”

“I get possession at the end of October. I’ve given notice to the landlord for this apartment for the end of November. We’re only in the first week of October, which gives me more than enough time to pack and get ready.”