To save her mother’s life, Myra comes up with a plan to travel back in time and return without any of her team knowing.

Myra's excursion to the past goes according to plan until she steps through the portal to return to her lab. To her surprise and consternation, she ends up on an alien world with a hoard of dragons.

The time machine has malfunctioned and either killed her, and she’s gone to the afterlife, or she’s been badly hurt and hallucinating. But the exotic hunk called Odon feels far from a hallucination… 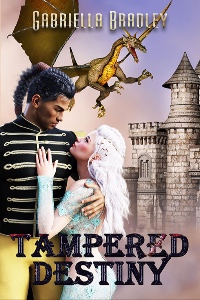 Myra waited a long time, but the portal didn’t activate. She had no idea what to do in the middle of nowhere. Start walking? Try and find civilization? Hell, it could be an unpopulated planet. What about predators? Fuck, I don’t have anything with which to defend myself…

While she waited, she studied the scenery around her. The plants, flowers, and grasses were intriguing. The flowers were unlike any she’d ever seen, some of them as large as a dinner plate. Small, shiny, blue, glowing birds—fluttering fast like hummingbirds—darted from flower to flower. Their wings looked like two little wheels spinning fast. Now and then, one or two of them hovered before her face as if studying the stranger who had invaded their territory.

The suns were now close to the horizon. The time here had to be close to evening. Myra was hot and dying of thirst. Suddenly she heard the sound of flapping wings from above. Startled, she looked up and shaded her eyes as a whole swarm of the little birds shot up into the air and flew away. She saw what resembled large birds with a huge wingspan high up in the sky. A few of them began to descend and slowly grew larger.

“Oh, my God! Those aren’t birds. They’re dragons!” Wildly, she looked around, but there was no place for her to hide. She was easy prey. Were dragons carnivorous? Was she going to be their dinner?

She made herself as small as she possibly could by crouching, but her white and blue bodysuit stood out like a sore thumb against the red colors of the grass and ground.

The dragons were very close now, and they were gigantic. Slowly, three of them descended and landed about thirty feet away from her. They were magnificent beasts, and even through her fear, she couldn’t help admiring them. Two of them were red, one a glittering gold, their scales shimmering in the light of the suns, and they had glowing amber eyes. To her amazement, they began to squirm, and within a minute, three men stood where the dragons had been.