What is Q to do with an infant? There are no survivors on Cruvo, so he is at a loss and Patch, his android, is not of much help. He has no choice. To save the baby, he takes the capsule aboard his ship.

To his consternation, the infant grows miraculously fast and on the first day becomes a teenager. On the second day, he is looking at a fully grown, adult Cruvonan woman.

Not only is Fleur, as he has named her, a woman now, but she is beautiful and sexy. It doesn’t take long for her to capture his heart. But is a relationship between them ever possible? 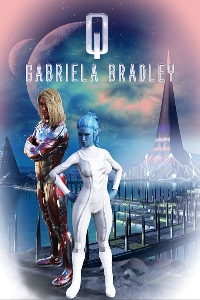 After a rocky landing, Q unstrapped and went to the lockers to suit up. Once he strapped on an oxygen tank and put on the helmet, he opened the door to the airlock compartment. Patch followed him in. After the door clicked shut, Q opened the second door and pushed the button to lower the stairway. He stood at the top of the steps for a few moments, taking in his surroundings. They had landed near the border of what had been the capital, close to a crystal factory.

The suit and heavy boots made movement awkward. Q slowly made his way down the steps, followed closely by Patch. A dense gray and brown haze drifted not far above the ground, hiding the sky and the suns.

“Virtually nothing left of the factory,” Q said while inspecting the piles of rubble and twisted metal, avoiding the charred remains of Cruvonan citizens.

“Be careful, Captain. Some of the metal is still red-hot.”

Q grunted. “Where do we even begin to search?”

Patch checked his reader. “Radiation levels are not that high. I detect crystal minerals under that large pile of rubble just ahead of us.”

“Could we be that lucky?” Q mused and watched as Patch began removing debris from their path with ease. “Patch, I’ll leave you to search for the crystals. I’m going to take a look in the city, or what’s left of it. We might be able to scavenge some useable stuff.”

Q walked the short distance to the city’s borderline. From what he could see, he doubted he’d find any useable items. They’d need bulldozers and robots to search among all that debris.

He walked between the piles of rock, cement, and twisted metal and was about to go back to join Patch when he noticed something sticking out from behind a big block of cement. Not too far from it lay the remains of three charred bodies. The object looked like a mass consisting of a gelatinous substance. His curiosity piqued, he climbed over the rubble, taking care to avoid anything metal until he was close to whatever it was.

It was a translucent white bubble. Carefully, Q poked it with his gloved hand. It didn’t move. Wondering what it could be, he shoved some of the rubble out of the way and carefully rolled the object toward him. It was about two feet long and resembled a giant capsule.

He wiped some of the dust away and saw movement within the object. “What the hell! It’s a baby! And it’s alive!”