Crown Princess Tiraza Azyriah Avalynn Rochmiere, firstborn to the king and queen, does not look forward to her twenty-first birthday. As always, bound to her wheelchair, it would be just another day in her dull existence.

Little does Tira know that she will receive the ultimate birthday present at the stroke of midnight, delivered by a sorcerer. 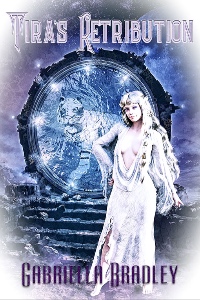 The voice had faded, and the static electricity stopped. Kyllan turned to her. He tilted her chin. “How do you feel about what the god said, little one?”

Tira put her hands on her hips and gave him an angry glare. “How do you think I feel? The gods are using me like a puppet on a string. I have barely been released from my life as a lifeless doll, and now I have to go and face some evil being? And I will not be your mate!” She almost snarled the words at him.

“And she’s got a temper!” Kyllan patted her on the cheek, then bent and placed a kiss on her forehead.

It took her by surprise. She stepped back and asked, “Don’t tell me that you’re pleased with being told how to live your life!”

“I learned long ago that we don’t antagonize the gods by disobeying them. If what they said is their plan for us, then so be it.”

Tira could hardly believe that he was okay with all of it. All the romance movies she had watched spoke of chemistry, attraction, falling in love, women meeting the man of their dreams. Sure, she’d dreamt of such, but being a normal young woman, being able to walk, talk, and have fun, was uppermost in her dreams. To be bound instantly to a stranger was certainly not at the top of her bucket list.

Kyllan took her hand, and in silence, they left the temple, down the steps, and walked back to the palace. She had to admit that she felt attracted to the handsome man beside her, that something was pulling her toward him. But what did she know of real life?

Those feelings could be awakened by any young, handsome man she’d meet. No, this binding could not stand. And to go up against some evil entity? Every fiber in her being rebelled against what the god had told them.

When they entered the royal quarters, the table had already been set for lunch. Her mother rushed to her, placed an arm around her shoulders, and gave her a brief hug.

“You were gone a while. Did you speak with the gods?” the queen asked.

“Yes. I’ll let Kyllan tell you.” Tira stepped away from her mother’s clinging arms, walked to the coffee table, and poured herself a cup of coffee.

The queen sat opposite her. “You seem irritated, Tira. What’s wrong?”

“Ask him.” She inclined her head toward Kyllan, who had remained standing.

“Uh-oh. Kyllan, what did the gods say?” the queen asked. “Sit down. Lunch will be served in about half an hour.”

“The god bound us. Tira and I have become mates.” Kyllan replied.

You could cut it with a knife.