Anthea’s one-week vacation at a Caribbean paradise is rudely interrupted on the first day when the UIA calls her home for an emergency undercover mission.

Anthea is assigned to go back to university as an undercover student to investigate the mysterious disappearance of seven young women.

Anthea wakes up on an alien planet that appears to be on fire, and a golden man with wings is standing guard outside the window. She quickly realizes that this is a mystery that no one on Earth can ever solve. And that she will be added to the list of those who have vanished without a trace. 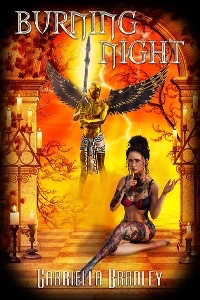 Anthea’s cellphone wouldn’t stop ringing. She was sorely tempted to turn it off, but she couldn’t. What if something unexpected happened with her mother? She’d never forgive herself, though the specialist had assured her that it was safe for her to go away for a week.

One week…one lousy week. Anthea needed the time away, or she’d end up going insane. Just slightly… She was too strong to let life’s obstacles affect her. Nevertheless, working nonstop for two years, dealing with difficult cases, plus coping with her elderly mother’s illness had taken its toll. She’d been so tired, both mentally and physically, so she’d taken a week’s vacation. And here she was on a silvery beach on Dreamquest Island, a private island in the Caribbean with only a max of a hundred adult guests. And she was determined to have a great, relaxing time…

Except for her damn phone… Her first day on the beach and some idiot phone stalker kept bugging her every five minutes.

Her thoughts drifted back to her mother. Anthea called her every evening to check on her. I wish Dad was still here… But her father—eight years older than her mother—had passed away three years ago of heart failure.

Her parents had had her late in life. After years of infertility, her mother had become pregnant in her late forties, just after she’d started menopause. And now, in her early seventies, she had been diagnosed with stage four ovarian cancer. Clara was undergoing her last bout of chemo, but the specialists gave little hope. Even the hysterectomy that Clara had finally agreed to had not caught all of it. The invasive disease had already spread to other organs. Why did Mom leave it so long to go and see a doctor? Anthea swallowed the lump that formed in her throat at the knowledge that her mother had only months left.

Anthea glanced at the screen. Anonymous caller. Who the hell was bugging her like this? It had to be a prankster. Even telemarketers wouldn’t call every five minutes.

“Hey, gorgeous, why don’t you answer that fucking phone?” a male voice called out to her.

Anthea ignored whoever it was. Maybe I should call the office and see if they can track down the phone stalker. Will they do that for a personal phone? She shrugged. Probably not.

She worked for the Universal Investigation Agency, the UIA, as it was generally called. At age twenty, after graduating at the top of her class from Quantico, the UIA had requested her. It was quite an honor, especially since she was far below the required age of twenty-three when she’d begun her training at Quantico. But she’d been a very early graduate from school, sailed through university in record time, got her masters in biological and physical science, and decided to take a risk and apply. At that time, she was eighteen and one of the youngest ever accepted into the Quantico program.

Being an agent for the UIA was a job most trainees coveted. And she loved her job. It was her personal life that was taxing. She heaved a sigh and jumped up. She needed a drink.

After slipping her sandals and beach robe on, Anthea made her way through the hot sand to the cabana bar. Several men were sitting at the bar, who ogled her as she sidled up. She ignored them. She was used to men, and even women, staring at her tattooed body. She had little or no interest in striking up a friendship with any of them. There was no time for a man in her life. Especially one she’d only hang out with for seven days and would never see again.

“I’ll have a Sweet Mama, please. Make it a triple and tall.”

“Oh, baby, I’ll be your sweet mama,” a young blond man crooned, walking around the bar to stand next to her.

Anthea looked at him. He wasn’t half bad. Quite tall, very tanned, and lean, but muscular. He had brown eyes and an engaging smile. “Thanks, but no thanks. I’m only here for a week.”

He ignored her not-so-polite dismissal. “So am I. We can hang out together. I noticed you on the beach, and you seem to be by yourself, as am I. My name’s Greg.”

“Nice to meet you, Greg, but not interested. Sorry.” It wasn’t entirely true. He had fired up her hormones, and she really wouldn’t mind hopping in the sack with him. How long has it been? Hell, I’m in a bad way if I can’t remember the last time I got laid… It might be good therapy… Mm, why the hell not?

“You’ve got the bluest eyes I’ve ever seen on a woman. And those tattoos…I’ve been watching you from a distance. Man alive, what I would give to see them up close.”

“I think the lady said no,” a woman at the bar said.

The bartender handed her the drink, nicely decorated with a slice of pineapple, a red cherry, and a little paper umbrella. “Would you like anything else? Some crackers and cheese?”

“Yes, I’d like that.” Anthea turned her attention back to Greg, her earlier resolution shoved into the back of her mind. “Okay, I’ve changed my mind. I would appreciate some company. Come sit with me on the beach,” she invited.

He smiled. “Great. What’s your name?”

He held out his hand. “Pretty name, for an even prettier lady. Pleased to meet you. I’m Greg.”

Anthea chuckled and took his proffered hand. “So you said. You can wait for the tray and join me. See you in a bit.”

She hurried back to her spot and sank down on the towel. The sun had shifted, so she adjusted the umbrella. Last thing she needed was a sunburn because the sun could fade her tattoos.