More From Beyond the Veil

"Lords and Ladies. Who is that yummy hunk?" Radisq breathed, captivated.

Radisq had already been bored, monotonously greeting all the nobles as they stepped up to him. With the exception of Ilno keeping him company, he was still anxious about the party and thus unable to enjoy it. Even still, he had been raised to be gracious at all times and thus had absentmindedly performed his duty as a host, but the moment hair the color of flame and eyes the shape of almonds caught his attention, boredom had quickly vanished.

"You might want to tone it down a bit, cuz. You're broadcasting," Ilno said with a chuckle. "But right you are. That is one hunky man."

"He's mine!" Radisq said with a low growl, blushing when Ilno sent him an amused glance, with both hands raised as though in surrender.

Immediately, Radisq turned his attention to the man headed their way. He was, simply put, the most gorgeous and breathtaking man Radisq had ever seen, and his breath quickened with the man's every movement.

Flowing red hair touched down to the man's waist, swishing back and forth as he moved seductively toward them. He had a few decorations holding back his long, long hair from his face, directing the hair to fall straight down his back, revealing his pointed tipped ears. The man was lean, but still, he commanded the attention of everyone around him.

Radisq felt as though he and the man were the only beings in existence. He was unaware that he held his breath as the man approached, anticipating that moment when they finally stood a mere distance apart. For the first time in Radisq's life, he felt a stirring in his groin, and he wanted to jump into the man's arms to devour him whole.

Finally, the man stopped before him and gave a slight bow before straightening to his full height, locking gazes with him. At once, the breath he'd been holding rushed out of his lungs in a whoosh. His face flushed with both excitement and wonderment, Radisq was unable to look away from those bluer-than-blue eyes, taking in the man's features as he committed it to memory.

He wanted nothing more than to rush into the man's arm, but the trance he was held in rooted him to the spot.

"I am Prince Aaeren of the Fire Kingdom." A smooth, silky baritone drifted to Radisq, washing over him like honey.

“You will really do that for me? Even though we have only just met?”

“But of course. You are my life-mate. Wherever you go, I go and wherever I go, you go as well. We are a partnership. We will kill two birds with one stone should we take your tour as our matingmoon after the ceremony. We can save the fire kingdom for last since that is our destination.”

“So we will live in your home then,” Radisq said.

“I am the next in line for the throne. Soon after our nuptials, it is tradition that I ascend the throne since my father will step down. I am aware that this may overwhelm you, which is why it makes sense for us to take a break, using your voyage as our matingmoon before the coronation.”

“That is plausible. However, you are forgetting something,” Radisq said with a frown.

“Please enlighten me, my fair prince.”

“I am also the next in line for my father’s throne. I am an only child, as you know.”

Aaeren stood up and paced, recognizing the dilemma. “Yes, yes. I did not think of this. My apologies. Hmmm. This does seem complicated.”

“What I have not yet said is that I am able to relinquish the throne, but only to my offspring. This means that within the year, I must birth a child and name him king, leaving my parents to act as custodians of the throne until such time as the child is grown, but the child must be birthed within the year, or I must ascend the throne,” Radisq explained.

“A child? Within the year? You would have a child with me?” Aaeren appeared flushed, but whether with excitement or dread, Radisq could not tell.

Radisq stood, watching his mate. “Of course. You are my life-mate. It will be a pleasure to birth a child of both our loins. Do you not want a child of our union?”

“But of course I do.” Aaeren approached Radisq where he stood by the bed and lifted the prince off his feet, swinging him around. “I did not ever give thoughts to having a mate or think that I would find mine this early or even that I would be planning a family. I am glad you will allow our mating and carry our child, even though I am a bit wary of the time limit, but I will accommodate all your needs my mate and take great pleasure in creating our child.”

Radisq laughed, his voice ringing like melodies, soothing and touching Aaeren’s heart. With his hands around Aaeren’s neck, Radisq brought his mate’s mouth closer and sealed them together in a passionate kiss.

“It pains me that we must wait till after the ceremony before I can claim you. Damn the law,” Aaeren said with a groan.

Radisq gave a delighted laugh, excited at his mate’s passion. “And when is the ceremony going to be?”

“Two weeks. We’re holding it the moment my parents and court advisors get here. I don’t think I will be able to wait those two weeks though without touching your delectable body.”

“If it helps, I do not think I will be able to resist you for that long either,” Radisq said with a flirty smile on his lips.

“Good,” Aaeren said, taking Radisq’s lips between his once more in a sweet kiss.

Aaeren sucked on Radisq’s lower lips, peering straight into Radisq’s eyes without letting go. This was his mate, the one who balanced him out and belonged to him for all of time. The euphoria that washed all over him was unlike anything he’d ever know. A mate was a sacred thing among the fae, and having found the one person who completed him, he couldn’t for the life of him remember why he’d resisted finding a mate.

Radisq melted into Aaeren, feeling giddy and satisfied all at once. Somehow, having to leave his home to reside somewhere else didn’t seem like such a stretch anymore. Not if he got to wake up beside this gorgeous male for the rest of his life. Somehow, his feelings had already started to grow, but even he knew that he would need to get to know Aaeren better for the feelings of love to solidify between the two of them.

“Kiss me properly. Don’t tease me.”

Still, he took Radisq’s mouth in a simmering kiss, giving his mate what he wanted. He angled Radisq’s head the way he wanted and drove his tongue into Radisq’s mouth, tasting the sweet nectar awaiting him there.

Soon, the passion of the kiss they shared consumed them wholly.  Both disheveled and panting hard, with dilated eyes and red, kiss-swollen lips, they pulled back, staring at each other in wonderment.

“I keep it because it grows back so quickly.”

“Don’t ever cut it,” Radisq said, still absorbed by the play of light in those red, silky strands. “I would love to see it splayed on the bed when we finally make love,” Radisq said, biting his lips as he traced his hand through Aaeren’s hair, moving it down the length of it until he reached the tip next to Aaeren’s ass.

Aaeren sucked in a breath, arching into Radisq’s touch. “Yes.”

Radisq’s other hand brushed Aaeren’s sensitive pointed ears, tracing the skin there. Radisq was rewarded with a moan from Aaeren as the other man closed his eyes and fell into the touch, Aaeren’s cock was hard to the point of breaking, and with Radisq tracing his ears, it felt as though his mate was giving him a hand job.

“Stop or I will come right now,” Aaeren said in a groan, his body language seeking more of the touch, contradicting his words.

Smiling mischievously, Radisq continued teasing Aaeren. His hand moved over a spot behind Aaeren’s ears, and the other man came in his pants with a loud shout, his body shuddering at the feeling of ecstasy that overcame him. 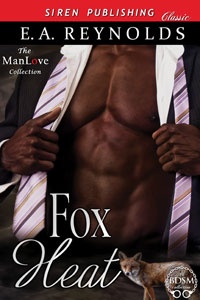 Meet Me at Sunrise (MMMM)
Lynn Hagen
In Shelf
$4.99
Tweets by
sirenbookstrand