The exploration ship sent out months ago to find a suitable planet for the population of Makunia returns with seven captured Earthlings. Valonius is furious when he learns of this lawless act.

Upon meeting the Earthlings, a woman called Athena intrigues Valonius. Beautiful, alluring, she is a spitfire and minces no words.

Athena feels drawn to the handsome blue alien and determines to at least seduce him before doomsday. Little does she know that she and the other six abductees have landed in a web of intrigue and deceit. Or that they’re in for the adventure of a lifetime... 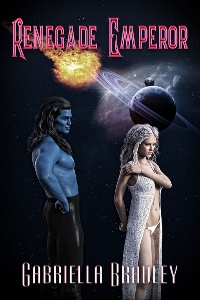 Athena picked up the clothing that had just been delivered to their room. She shared a room with Rhonda. The room was luxurious, to say the least, with a bathroom fit for royalty. And maids had come in and filled and perfumed a sunken tub for them. She held up the blue dress. Made of shimmering chiffon, it was, in one word, gorgeous. A dress movie stars would wear. Rhonda’s gown was yellow and similar. Dainty underclothing lay on the bed, and two pairs of gold sandals were on the floor.

“And now we’re treated like royalty,” she muttered while throwing the dress back onto the bed. “Will this stuff even fit us?”

“Tell me about it. It doesn’t make sense. First, we’re prisoners, poked and prodded, living on bread and water, and now we find ourselves in the lap of luxury.” Rhonda chuckled.

“That emperor looked very uncomfortable. Something doesn’t add up. He’s making up for us being treated wrongly. So why were we rudely snatched and prisoners to start with?” She stopped when there was a knock on the door and ran to open it.

“I don’t think we would have gone along with them willingly. Imagine…one of them comes up to you and asks you to go with him to Makunia. What would you have said? I would have told him to go to hell or probably called the cops.” Rhonda continued chatting while Athena opened the door.

A female servant dressed in white tights, boots, and jacket, which contrasted sharply against her blue face, wheeled in a trolley. Several silver domed platters were on top of it, and a jug and glasses. Athena studied the young woman for a moment, noting the girl was quite pretty, in a blue way. Her hair was done in intricate cornrows with a thick braid framing her face. Her eyes were outlined with black kohl, and she wore pink lipstick.

When the woman removed the domes, Athena nearly swooned at the sight and smell of delicious pastries and fresh breads accompanied by a plate of fruits and cheese. “Thank you,” she said and smiled at the woman, who avoided looking at them and quickly hurried out of the room with her head bowed.

“Do we look that scary?” Rhonda commented as she took one of the pastries and popped it into her mouth.

Athena pulled a face. “Don’t know. I guess they’ve never seen aliens. And that’s what we are to them, aliens.”

“Right. Like they are to us. But though they’re blue, their features and bodies resemble us. Although we don’t know what’s hidden beneath their clothing.”

Athena giggled. “That’s an interesting thought. Maybe the men have prickled cocks, or two of them, and the women three boobs.”

Rhonda burst out laughing. “Stop it. You’ll have me choke. Well, this is the best food I’ve had since we left Earth.”

“You mean since we were snatched.” Athena huffed. “Having been in stasis, it feels like it happened not that long ago, yet the ship took three months or more to return to this planet. Do you remember anything beyond them abducting you?”

“Nope. I don’t even remember that. I was on my way home after working the afternoon shift. I got out of my car, felt a small prick in my neck, thought it was a bug. and went to slap it. Next thing I knew, I woke up in a glass container that looked like a coffin wearing this ugly thing and was marched off the ship along with the rest of you.” Rhonda shrugged. “You know the rest.”

“Same here, although they got me just as I was getting into my vehicle. I never heard them coming up behind me. It happened so fast.”

Another knock on the door. This time Rhonda went to open it. Athena looked and saw the man who had sat next to the emperor.

“Emperor Valonius would like you to join him for dinner this evening,” the man said. “A guard will escort you to the emperor’s chambers.”

“Thank you,” Rhonda said and closed the door. “Well, what did we say earlier? Suddenly we’re treated like honored guests?”

“He might be blue, but if you look closely, he’s damn good-looking. And muscular, too, judging by his tights and snug uniform jacket. And that long, black hair…”