Eden Farrell strode along the sidewalk in the shade of the buildings on the main street. He considered Liberty as he walked. She’s beautiful and intriguing. It’s obvious she likes me, which is great because, hell, I like her…a lot. Her eyes are so eloquent. I bet she doesn’t even know she’s broadcasting such potent attraction signals. She’s kind of shy, though, or just not aware how lovely she is.

He arrived at the store he’d bought, turned into the porch area, and took the key from his back pocket. The deal closing the sale was under his new business name. He’d ceased trading under his original name. This was essentially a new start for him and a risk, because some of his clients had come to him via word of mouth and that wouldn’t start happening again until he proved himself over. It had to be done, and Eden could weather the setback financially with his inherited wealth, but Eden liked to work. In fact, he’d completed a quiz in a magazine once that categorized him as a workaholic. The verdict had made him smile.

Eden let himself into the store and checked out the changes he’d ordered to refurbish the place. It had only taken two weeks, but had transformed the interior into an office space, a file and computer server room, a kitchen, and a foyer area. They all sparkled with white walls and polished floorboards. Eden awaited the tradespeople to put his business name on the plate glass window, and take down the signage from over the top of the window attached to the outside of the building, relating to the last owners of the place. Other than that, all he needed was furniture and hardware. Eden looked forward to the delivery over the next few days. The telephone lines worked, and he’d already placed a router and wireless booster in the office when his ISP had informed him the connection was live.

Behind Eden’s relocation to this town lay two significant reasons. One was associated with Dani and Jason Cruz, the entrepreneurs who instigated and managed the regeneration project happening in the town. The other was pure self-interest, or if Eden wanted to admit it, self-preservation.

Since he’d met Liberty the previous week, Eden felt sure destiny would have brought him to the town somehow anyway. The moment he set eyes on Liberty, he wanted her. He knew right away that she was special. It wasn’t a surprise to find a wolf shifter in the same town as Dani Cruz. The surprise came when he discovered Liberty didn’t hide her scent at all. Worry flooded him when he considered it, but it was something he would address later. Eden detected other wolves in this town all from the same pack. His curiosity piqued, he tracked one of the scents to the local mechanic, and then another to a shop selling artwork. He figured the other scents that disappeared at the curb had to belong to pack members who drove to their destinations.

Eden was staying at a motel some way down the new highway until he furnished the apartment over the top of the store. An extra bonus to his relocation, he’d arranged for it to be painted, too. With the floorboards polished, new blinds and a couple of rugs were all he needed next. The previous owners of the store refitted the bathroom, kitchen, and utility room so that they might achieve a better price in the sale of the property. Eden gave them what they asked with no haggling. He wanted the place, and they needed a fast contract exchange. Win-win all round.

Eden’s sleek gray car stood in one of the parking spaces at the back of the store. His only misgiving about the purchase was the lack of parking for his clients. The wide main street allowed angle parking and maybe that would be enough. Lots of his clients might never even visit his offices. Eden operated mostly online in the past out of the need for as much anonymity as possible. He met clients in coffee shops only when they insisted on face-to-face meetings. Now with this office space and in this town, as soon as he’d convinced the Cruz family to help him, he could be less cautious. He wandered over to the window and gazed out. The special treatment on the glass allowed for those in the place to see out, but passersby only saw a pretty, silvery-blue tint, and when applied, the business name, Farr Agency.

Eden picked Liberty up the second they’d gone through his apartment door. He nuzzled her neck and murmured, “It very nearly killed me seeing you in the café today and not being able to kiss you. Dani told me I should ask you out. She said sparks flew.” He reached Liberty’s mouth as he dotted kisses up her jaw. He kissed her, closing his eyes and crushing her against his body. The softness of her lips sent him floating in a haze of lust. His cock filled out and he pressed against her hip.

She opened her mouth to his searching tongue, and her little gasp of pleasure drove him crazy with desire as her tongue slid on his.

He strode to his bedroom and laid her on the bed.

Liberty sat up before he could lean over her. “Eden, I’ve been racing around all day and not had time to go home. I’d love to shower.”

Delighted, he smiled wickedly. “That sounds like a very good idea. I’ll help.”

Liberty laughed aloud. She threw her arms around his neck and hugged him. “It was lovely to see you, and we did hold hands. I felt mean pretending I was only just meeting you when Dani introduced us.”

Eden pulled her to her feet and turned her around. “It was necessary, but I’m sorry to have made you feel that way. We’ll tell her soon. The real reason I didn’t say anything is because I wondered if you’d like to tell your family first. You know we’ll always be together now. Where’s the fastening to this dress?” He felt along the side seams, having found no zipper at the back. Then he discovered a zip and opened it.

Liberty leaned to kiss his lips. “I think I might say something next week. It just seems so unlikely that I feel so much for you after only a few days.” She lifted her arms. “The dress needs to be pulled over my head.”

Eden pushed her hair behind her ears and kissed her again. “How much do you feel? How much do you want me?” His voice husky with desire, he took off her dress and dropped it on the bedside table. “You’re so lovely.” He kissed her shoulders and unclipped her bra.

Liberty slid it down her arms. She placed it on top of her dress.

Eden gazed at her. Her nipples peaked, and Eden ran his tongue over his top lip as a longing to suck each one gripped him.

Liberty ran her hands along his chest and then around the back of his shirt. She dragged it up.

The desire in her eyes pleased him. He removed his shirt and unfastened his jeans.

Liberty slipped a hand down inside his jeans. She smiled before she kissed him, standing on tiptoe to reach his mouth. “You feel good, hard and soft, and so delicious. I think tonight I’m going to have you come in my mouth.”

Eden’s erection completed as her words sent spears of sexual desire rocketing down his stomach. Her fingertips on his cock felt like heaven. He groaned against her lips. “Fucking hell, I’m longing to fuck already. Let’s shower.”

He stepped away and dragged off his boots and jeans. He discarded his boxers in one rapid move.

Liberty was watching him, and her appraising gaze made him even more desperate. He literally swallowed down a yearning that was almost painful, to grab her, tear off her panties, and fuck her hard. He hooked his thumbs in the top of her panties and took them down to her ankles. She wore shoes with wedge heels, and he looked up at her. “Hold on so that I can take these shoes off you.”

He sighed with pleasure. Her every touch was so welcome, so good to feel, his balls ached, his ass clenched, and his cock leaked. He took the shoes off her and then slipped her panties off. He left them on the floor and grabbed her around the thighs, lifting her over his shoulder as she laughed and ran her hands down his back to hold on.

He carried her into his bathroom sliding a hand between her upper thighs as he walked. He couldn’t resist teasing at her pussy.

Liberty gasped, and cream wet her folds under his fingertips.

Eden stopped at the shower stall and reached one hand in to turn the faucet. He let Liberty down slowly and held her against his body. He thrust his hard cock on her stomach gently as he held her face and kissed her. “I am going to fuck you all night.” 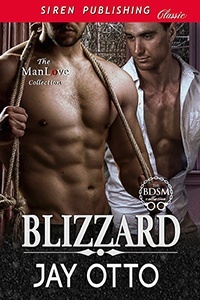